Another Side of Dwayne Johnson

The San Andreas star on the importance of family

Disaster films are an especially touchy subject in Japan. Memories of the Great Tohoku Earthquake and subsequent tsunami are still fresh in the minds of the nation, and the upcoming release of San Andreas (Japanese title: California Down) is being handled with care. Despite being a movie about a massive quake, the heart of the story focuses on family, love, and the strength to overcome. Metropolis caught up with the film’s star, Dwayne Johnson, to find out what personal experiences influenced his role and the message he hopes viewers will take away from the film.

Your film career covers a wide variety of genres—and certainly plenty of action. San Andreas is quite a ride, though. How does this film differ from your past experiences? 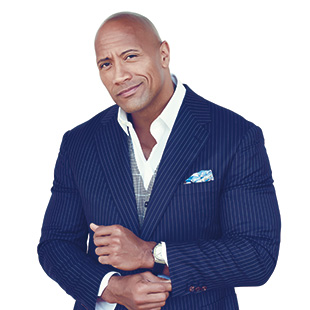 It was the underdog of the summer and we always knew it, but never made the movie thinking, “Hey, let’s make a movie and hopefully it will break some records and be big!” It was always, “Hey, we have an opportunity here to make a movie in a genre—the natural disaster genre—that hasn’t been around for some time.” It was also the opportunity to make a movie about a massive earthquake. And as simplistic as that sounds, and as relevant as it is considering how powerful earthquakes are and how they happen every year … the last earthquake movie was in 1972 or 1971, and it was called Earthquake. So, it was an opportunity to make a movie that hadn’t been done in decades, in a genre that hadn’t been played in for some time.

The love that your character Ray has for his family really comes through in your performance. Did you draw influences from your own life?

Without a doubt. I couldn’t have made this movie five years ago or 10 years ago because I was a different man with different experiences. Since then, 10 years ago, I had gone through my own struggles and challenges with raising a daughter, a teenage daughter, questioning my ability to be a great father, hoping that I could be. [I had] gone through a divorce, I know what that’s like and the challenges of that, so there’s been a lot of ups and downs in my own personal life with relationships that, by the time the script came to me, I had lived and been challenged, gotten through it, fallen on my face, and gotten back up, enjoyed success at relationships, and so I felt there was a nice poise that I was able to bring into the role. And it seems like a juxtaposition of nice, quiet poise, because around me is a massive earthquake and a lot of destruction and a lot of things happening.

But truly, it’s really a great question because I know that I just had to settle into the relationships that I have in my own life today, which I can enjoy because of the challenges that I had gone through. So, much like with Ray, he enjoys the relationship that he has with his daughter even in the wake of going through a divorce and in the wake of challenges and in the wake of actually losing another daughter a few years earlier. So, there were a lot of things that I was able to pull from, and I’m grateful for it.

Ray’s daughter Blake is a very strong woman who, like her father, is decisive, resourceful, and helps others. What are your thoughts on the importance of a father figure in a child’s life? 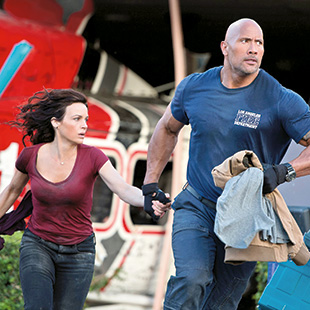 It’s the most important thing. Now, I’m a little biased because I’m a father and I’m a man. I always say that if you’ve got a good mom, then you’ve got a shot at being a pretty good person. But there is a very unique bond between a dad and his daughter. And it’s a thing that women know, and it’s a thing that guys know if they have a daughter. I’m lucky enough to have a daughter—she’s beautiful—and it’s the most challenging thing in my life, but it’s also the most rewarding.

Before and during the making of the film, you spent a lot of time with first responders. How did this affect your portrayal of Ray?

Oh, a tremendous amount. I’m so grateful for the amount of time that I was able to spend with the first responders. It informed me in a way … I think it is two-fold. Number one, there is a precision that first responders have that I think is God-given. It’s hard to explain. And I don’t have it, and I portrayed it to the best of my ability in the movie. But when you see these people operate in real life, there is a precision. They’re so sharp in the face of that type of adversity, which is so compelling to me and is so fascinating. I mean, I get to run around and play these guys, but to watch it happen and unfold, and watch them from the shadows, if you will, watch them operate was really incredible. It was the preciseness of their decisions that was very eye-opening to me and very powerful.

You spend time with them and you try and get a read on them, and you try to get a little bit of their DNA and their wiring and their makeup and their constitution. Regardless of where they’re at around the world, first responders—including in Japan … you spend time with them, and you’re so grateful. Then you make the movie and you’re shooting these scenes, and then [comes] the second wave, which I didn’t anticipate: Are they going to be proud of this? Are they going to be happy with what I did? We had the premiere in Los Angeles where the LAFD—the first responders, the [helicopter] rescue pilots, they had watched the movie and gave me a big thumbs-up. Many got emotional; gave me big, powerful hugs, which was all I needed. It was so cool, man!

Many scenes in San Andreas hit close to home for us in Japan, but the core of the film is about strength of character and family. What message do you hope to convey to those who impacted by such a disaster?

[I] live in Florida with my family, and we also have a home in Southern California that we’ve had for years. We experienced one of the most massive hurricanes ever recorded. In 1992, Hurricane Andrew hit our city of Miami and it completely wiped us out; it was the most terrifying experience for us. The elderly people in my family thought they were going to die. We thought they were going to die, because they were older, so we couldn’t actually take them. We couldn’t travel them out, so we had to just hunker down in that hurricane.

So I speak from experience, and the message that I hope to convey is the message of family and strength. And it’s through these disasters that we go through, if they’re natural disasters or we deal with challenges and personal disasters that happen to us, and happen to every family … The one thing that we’ve relied on as a family—and the one thing that I know we relied on in the movie—is that family strength, that family bond, the family love, and also faith and hope.

Not necessarily religious faith, but faith that things are going to get better; faith that we’re going to get through it. Not to sound preachy—it’s not my style—but I’ll share that that’s what we’ve experienced as a family.

Now, after making the movie, seeing it, and seeing how people responded, that’s one of the things that families have pulled from the movie: the power of family and the power of bond. Because it’s only until you go through it and you get to the other side of it that you realize just how strong your family really is, and how resilient we can be.

Up a CGI River