Highlights from this year’s collection

Tokyo’s art year usually kicks off with AFT, the big art fair held at Tokyo International Forum, where most of the main galleries—as well as some from overseas—show their wares for what they hope will be a profitable year ahead.

This year’s show comes about a month later than last year, no doubt to stay out of the way of the hectic start of the business and academic year. As usual, the pack is slightly shuffled, with a couple of new programs, a slightly different layout, and a new section for artworks that fall below the ¥1 million mark—to take advantage of changes in the tax law on depreciating assets. (Check with your accountant!)

But all in all, AFT is still very much a see-what-you-like variety show of different genres, multiple forms of expression, and a lot of breezing past what you don’t like to get to what you do. So, without more ado, here is my own personal selection.

The art at AFT covers a range from historical and antique to “paint’s still wet.” And sometimes it’s hard to tell the difference, as with this stylish simplification of the female form painted in oils by Kumagai in 1961, when he was in his 80s.

The female form, along with mortality, is also the subject of Suwa’s painting, a typically ghoulish offering from the gallery associated with Japan’s Gothic-Nihonga superstar, Fuyuko Matsui.

Surrealism has never really gone out of fashion and has been skilfully updated with a pop and manga sensibility in the work of Roby Dwi Antono, an artist from Indonesia.

Along with paintings, AFT also has plenty in the way of antiques and sculpture. Aoki’s lacquer and Styrofoam sculptures have a bleak elegance that redeems their disturbing physicality. 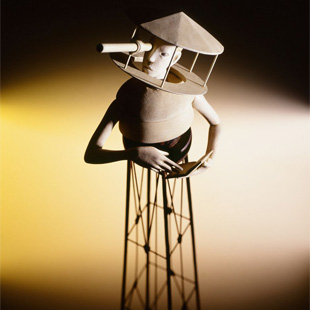 Another intriguing sculptor is Ko Kono, whose work in this case manages to evoke something of the surveillance state that we all feel ourselves living under to some extent these days.

Abstract art can often be cold and bland. But not in the case of Yamamoto, whose circular studies in acrylics have a warmth, color, and texture that gives them life and energy. 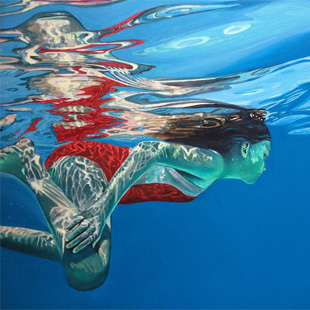 While technically more demanding, realist art is often considered less artistically challenging. But with the right subject and a sense for “the moment,” it can be just as poetic and transcendental as more esoteric forms of art.

“Tomoe” is a swirling form represented by a pair of commas that is common in traditional Japanese design. This provides the compositional motif in Sasamoto’s richly evocative nihonga work of two interlocked female figures.