Up a short flight of stairs, thirsty craft beer hunters will find themselves in delicious territory. Baird Beer’s fifth taproom in Takadanobaba is a long-awaited event for fans of this Shuzenji-based Japanese craft brewery. 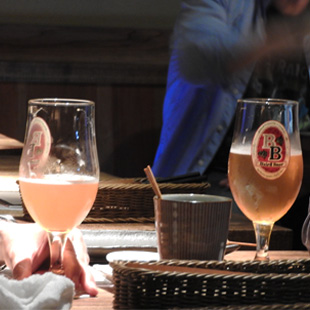 An interior dominated by natural wood instantly evokes warmth and comfort, while a chalkboard brimming with their full line of beers on tap whets the appetite. Visitors can settle in at wooden tables inside or venture out to the deck to peruse a menu focused on kushiage, a.k.a. kushikatsu (Osaka-style fried things on a stick).

While beer and fried food may appear simple, as anyone from Wisconsin knows, looks can be deceiving. Brewing good beer and managing the mysteries of the deep fryer are more akin to an artform, requiring a sense of timing, a tasty recipe, and a wee bit of flair. As expected, Baird manages both handily. Traditional kushiage such as pork and benishoga (pickled ginger) are available, but this taproom puts a seasonal spin on things by adding traditional sansai (mountain vegetables) like fukinoto (butterbur) and zenmai (fiddlehead fern).  The fried-cheese-on-a-stick accompanied by a curried ketchup was a table favorite, along with the corn and ginger fritters. A miso coleslaw, with its sweet-salty flavor, would be the envy of any Midwestern supper club.

It was the beer, though, that rightfully stole the show. Fruitful Life Citrus IPA was our top order of business as it was a new seasonal rumored to be disappearing fast. Hoppy yet smooth, its sharp tang was refreshing and paired well with our food. The Saison Sayuri, the spring selection from Baird’s Four Seasons series, also got the nod from our group for its smooth spiciness. The house beer, a smoked oatmeal porter, is hand-pumped in real ale fashion, to fully showcase its sweet, deep flavor. The verdict? “That’s a beer my mom would drink,” commented a friend, as they leaned back in surprise. “Sometimes oatmeal beers are too chocolatey, but this is perfect.” 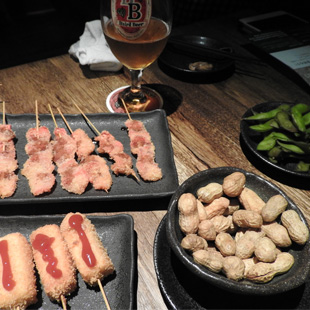 We rolled our way through a few favorites—the Single Take Session, Angry Boy Brown, and Suruga Bay Imperial IPA—with at least one more Citrus IPA thrown in for good measure. A hearty plate of Baird’s beer-based curry, along with the incredibly addictive Shimaguni Stout edamame, rounded out our evening. “That was num, num, num,” said one member of our group as he rubbed his stomach, and we made plans for our next visit. Perhaps not the phrase Baird will choose for its next marketing campaign, but a good summary nonetheless.