The Beauty of Airplane Cups

Most international travellers, if not all, are not particularly fond of plane food. With overcooked (or undercooked, depending on the airline) bits of meat and vegetables crammed into plastic containers, airplane cuisine is a common target of jokes and criticism. So it takes more than the average eye to see beauty and elegance in a tray of bland, unsatisfactory mush. 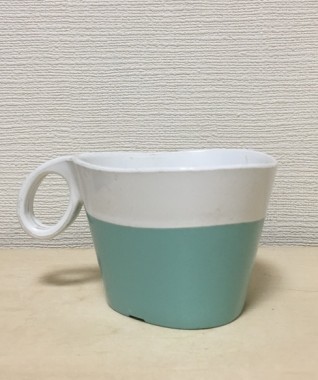 The “Airplane Cups” exhibition at SUNDAY cafe in Ikejiri Ohashi does just that. The exhibition showcases approximately 150 cups that were used during inflight meals. The collection of seemingly nondescript tableware reveals the diverse beauty hidden in the simplicity of these cups.

The collection encompasses over 50 airlines from all around the world, including United Airlines from the US, Scandinavian Airlines from Europe, and Garuda Indonesia from southeast Asia. The event organizers say that the cups, when displayed side by side, reveal unique characteristics of each country. Another factor in the diversity of cup designs is the history of the collection itself. The collector has been gathering cups since the 1950s, when airborne travel was still a limited luxury. The historical evolution of plane cups, first seen as drinkware fit for the privileged, later viewed as a utensil of mass travel, is another aspect of the exhibition that reveals the complexity of these humble cups. The cups from now-defunct airlines, such as Sabena (the former Belgian flag carrier) and Pan American Airways, once the largest international carrier in the US, are highlights of the exhibition.

The collection is the culmination of a half-century pursuit by the last remaining founding member of the GK Design Group. The collector, now 86 years old, is still active in the design industry and has been collecting airline tableware as a source of inspiration for his work. The GK Design Group has been at the forefront of Japanese design since 1952, designing everything from the iconic cone-shaped soy sauce bottles found in homes and restaurants all over Japan, to excavators and other industrial equipment.

SUNDAY cafe is located ten minutes from Ikejiri Ohashi Station and twelve minutes away from Sangenjaya Station. Admission is free, but visitors are asked to order one drink per person. The exhibition opens on March 10 and runs until April 22.