Amid the labyrinthine streets of West Tokyo, north of Nakano Station, and just east of Nakano Broadway on a dead-end street that can barely even be called an alley, is a little bit of craft beer otaku heaven. Good food, beer made onsite, and a cozy atmosphere await those who can find Beer Bakushu Kobo Nakano, the latest link in the chain of Kakyu Nomura’s brewpubs along Tokyo’s Chuo Line. Similar to the kobos (factories) in Ogikubo, Koenji, and Asagaya in both appearance and menu, Nakano is perhaps the smallest and the cheapest. Everything is a flat ¥500, making it, as my friend once quipped, “dangerously delicious.”

Nomura aims with each shop to create a place for neighbors to stop in, enjoy a pint and a chat, and maybe have a bite of food. Beers are crafted on location, just behind the bar, from ingredients that often form part of the decor. At the Koenji branch, bags of malt and grain serve as dividers between tables, while in Ogikubo, the bags line up below the counter. Tables and booths are fashioned from pressboard and unfinished lumber, while burlap sacks and green plastic hop vines soften harsh edges. Each establishment feels homey and informal—a perfect spot to settle down for one or two glasses of beer. 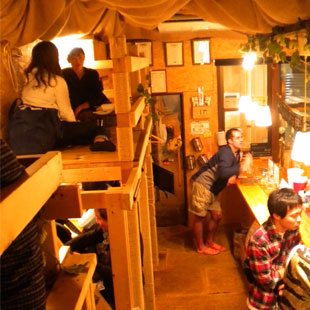 Nakano is no different, except that its tiny size means much of the seating is raised. Guests clamber up ladders to little cubbyholes replete with cushions and low tables at which to sip and nibble. “It’s like a beer fort,” my husband observed as we ascended to our spot after placing our order at the counter.

“That was a professional quality IPA,” said another member of my group, and the rest of us nodded in agreement. We’d selected a variety from the chalkboard signs that hang over the counter where orders are taken. A brown, an IPA, a wheat, and a pale ale. Veterans of the other Bakushu Kobos, we all knew that the beers can be a bit hit or miss. For craft beer lovers, though, that’s part of the fun and a big part of the attraction. Nomura’s hope is to spread the word about craft beer by brewing on premises and regularly. The staff are usually young and in training, meaning that results can vary. There’s no trouble finding good, sessionable beers, but it pays to work through the menu to find a favorite. However, Nakano hit the mark, glass for glass. 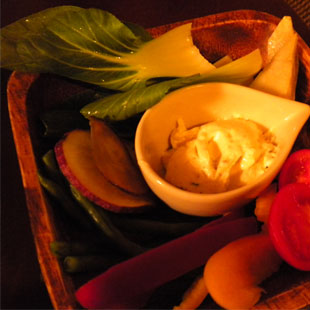 The golden brown IPA was a table favorite, as was the Pale Ale, a sweet and spicy brew that drank nicely. “That’s too good,” another friend said, leaning back against the wall, her half-finished glass in hand, grinning as the group laughed. The Wheat, made with Hokkaido wheat and a dash of soba, had a floral scent and a surprisingly pleasant corn aftertaste.

From our perch, we watched the cook work his magic with vegetables shipped up from Tokushima in a kitchen about as big as the average tatami mat. Two corner tables, perfect for couples or small groups, offer a romantic view of the tanks where the beer is brewed. Other guests filtered in, filling even the standing spots at the bar and along one wall, as we took turns descending the stairs to order and refresh our beers.

The menu sports a mix of Western-style and Japanese foods that paired very well with the brews on tap. Pickles (sweet and crunchy), juicy sausage with sauerkraut, and a tomato-based stew with beef tendon were among our favorites. The vinegared sanma (Pacific saury) was reminiscent of pickled herring from my home state of Wisconsin, and good enough that I badgered the group to order a second round.

There’s nothing fancy at any of Nomura’s kobos, which seems just fine based on how full the Nakano Kobo stayed during our entire visit. Brewed in the back, the beer stays fresh and the prices stay low. It’s an experiment that takes its cue from traditional European and American taverns as well as Japanese craftsmanship: local, handmade, and good. Those looking for sessionable beers in a friendly place need go no further.