Not a single song was performed twice during black midi’s Tokyo shows. On a Sunday night in December, a promising London band came back to Tokyo for their second Japan tour, which was put on hold for two years because of the global pandemic. However, its much-anticipated comeback witnessed high ticket demand, resulting in the band performing two shows in one night.

Even after a year-long world tour in 2022, the band still seemed to enjoy the shows just as much as the Japanese fans who had been waiting for the past two years. As if it was a roller coaster, melody, BPM, and genres all change from one moment to another but all are under control by these rising young talents. The energy remained high enough to ask for an encore. It was easy to envision the group’s return on much bigger stages soon.

Offstage, they showed a side of them that’s more your average 23-year-old than one of the hottest bands in the game. Walking into the interview room at nine in the morning, the three guys sang “Happy Birthday to You” to celebrate a Japanese promotor’s birthday. Japan isn’t only a stop to visit as part of their world tour anymore. Instead, it has become the place for the band to return for their many fans and their community.

It was odd enough to see them in the rays of the morning sun. However, it was even more peculiar hearing the familiar melody from black midi, the sounds of progressive, mass rock, and elaborate chaos. Metropolis spoke to the drummer Morgan Simpson to chat about the third album Hellfire, the creative process, and the recent Europe tour with a Japanese hip-hop trio Dos Monos.

Metropolis: You guys played two shows in Tokyo, which turned out to be entirely different sets. How did you come to perform different songs?

Morgan Simpson: We wondered how many people who came to the first show went to the second one because we thought that might be a thing. So, at least for those who came to both shows, we wanted them to enjoy both. But also for us, we didn’t want to play the exact same set twice in a day [Laughs]. So we were thinking about songs we played last time in Japan and songs that weren’t even released the last time we played in Tokyo. There was loads of practice, but at the end of the day, it just boils down to playing the best show.

M: Japanese artists Otoboke Beaver and ∈Y∋ opened for this tour. How did you enjoy this tour?

MS: Otoboke beaver opened in Osaka, which was cool. We’ve seen them in person a few times in Europe. And it’s funny the way we’ve been touring all this year. We’ve been crossing each other’s paths quite a few times. In America, they played at venues a few days after we played there.

The fact that we were in one city simultaneously was incredible, and it was really cool to play with them. It’s cool to have bands we’re actually into to “support” us, which is such a weird thing to think about [Laughs]. They are all such good artists. 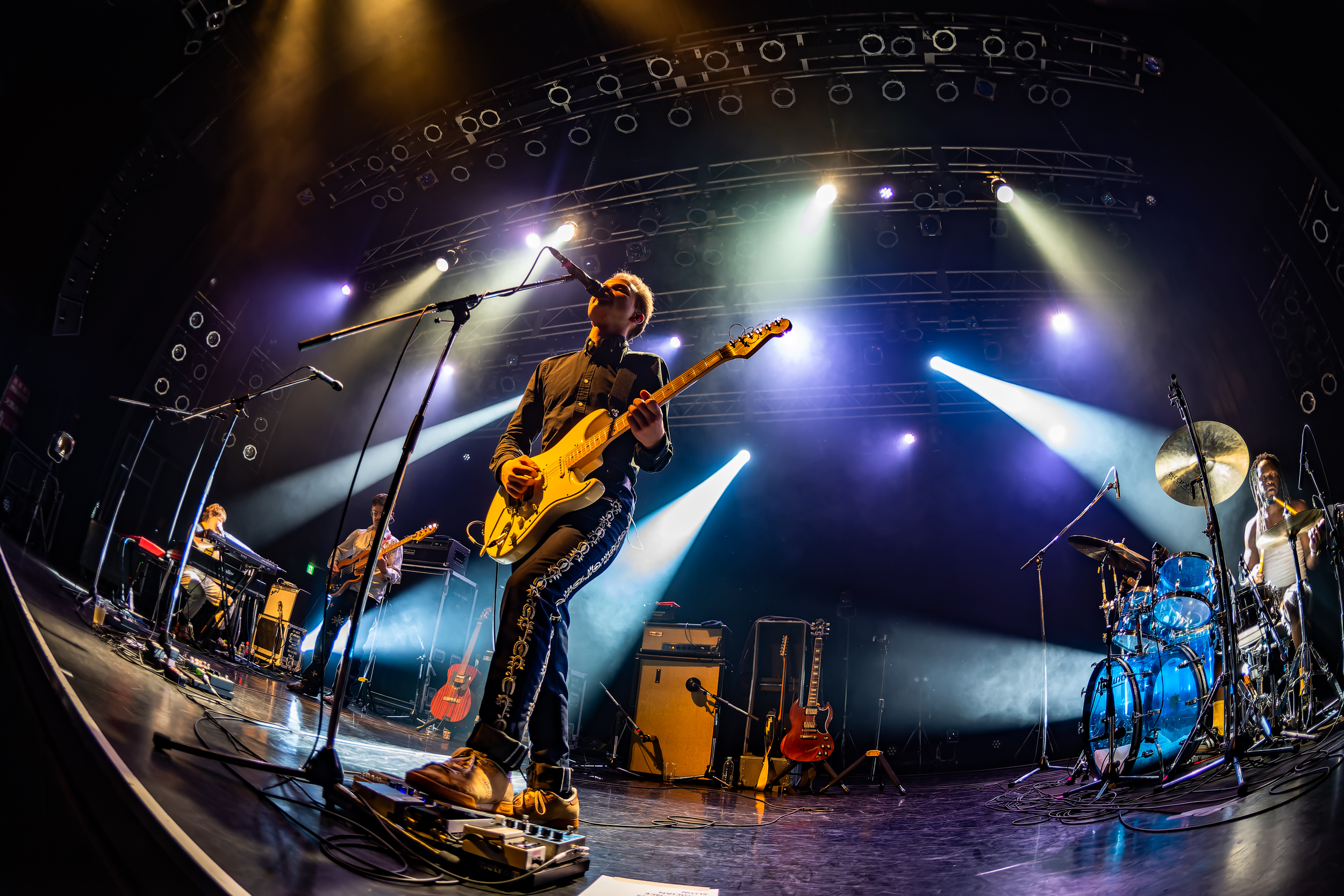 M: “Unpredictable” is the term I associate with black midi. The Asia tour flier uses a photo of you guys with Kyary Pamyu Pamyu. Who’s directing the band’s visuals?

MS: Regarding covers or album artwork, David Rudnick has done all artwork for all three albums and all our singles. He’s the guy we stumbled across through his work with Oneohtrix Point Never, and a few other artists’ covers we thought were cool.

Before the first album came out, we pitched ideas of who to work with. David is from the UK but moved to Belgium before our first album came out. So we reached out to him when we played a show up there once. And he invited us over for dinner to discuss some ideas. He cooked amazing pasta [Laughs]. I always bring this up to him, and I sometimes feel bad because I hope he doesn’t think I think he’s just a good cook instead of a good artist, which is obviously not the case [Laughs].

We hung out and shared ideas and felt we had similarities in how we think. David did the first album and the next two because it felt like making a lot of sense. We wanted to continue that relationship. But who knows where we’ll go next? We’re yet to properly delve into the next album for headspace because we’ve just been touring so much.

M: Are you guys open to new ideas for the next album?

MS: Yeah, the idea of doing a three-album cycle is cool because they’re all related in their way. I love that an album is a body of work, a musical body of work. It can be wherever it wants to be, and it doesn’t have to follow what came before or think about what is coming next. It’s just documentation—a screenshot of an artist.

M: Three albums within three years. What drove you guys to do so? Where do you guys get inspiration from?

MS: We don’t really like how the industry works, like putting out an album, then touring for two years, and then doing another album. Without artists, there would be no music industry.

Of course, we need the business side, but this is an example where artists’ wants and needs are prioritized. If an artist wants to put out two albums within a year, then why not? I understand it’s not that simple. You have to think about it from a marketing perspective, like, “Is it that beneficial to release many albums in one year?” But there’s almost too much thought that goes into those things.

Whereas artists pre-80s just put out music because that was the way at that time. For us, that’s an inspiration. No artist likes the idea of sitting on music for a long time. If you do it, you’re in a particular headspace. And you want to show it to the world as soon as possible. Otherwise, you’ll move on to a different space.

It’s going well for us, considering what we have had for the past two years. It was really beneficial for us as we stopped touring and recorded a second album while things were still going the way they usually worked. I didn’t think we could put out the second album within those two years. So we want to keep it moving. Stagnation is not something we are into.

M: Speaking of unpredictable, I saw a guy wearing black midi’s merch and holding drinks in both hands at the first Tokyo show. He was so ready for the show. But, then, at one moment, he took his phone out of his pocket and opened Bumble, swiping girls left and right. What would you expect your fans to feel out of black midi’s shows?

MS: From our perspective, I wouldn’t necessarily expect anything because we create and make something we give to people. And we put that out into the world. So therefore, we can’t control what people feel or expect people to think about a certain thing. If there’s a correlation between that and what people think, then that’s cool. But at the end of the day, what’s cool is that people can feel and get whatever they want. 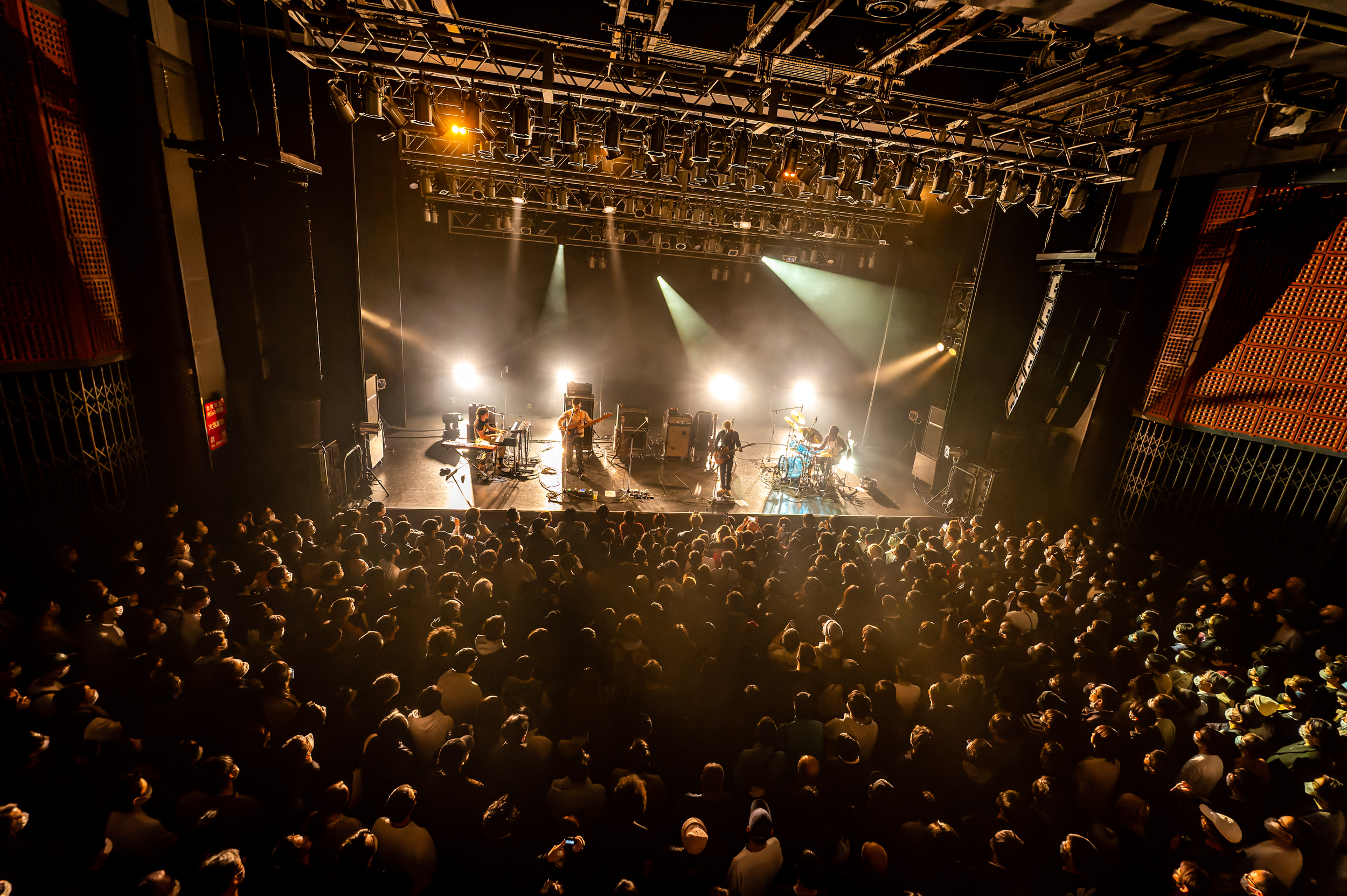 M: Why do you think bands like black midi, Black Country, New Road, and Squid are having a moment right now?

MS: There’s definitely some movement. And the common thread between those bands is that we all have ended up in this venue, the windmill in Brixton, which allows space for artists to experiment. There’s a side of artistry you’ll miss until you play live shows because that’s when you find out how your music sounds live and how people might receive it. At least for us as a band. And that’s becoming less and less frequent now in London because there’s a lot of pressure to put on events that will create money. So the idea of putting on a night of bands people haven’t heard of doesn’t make sense. So that venue is significant, and Dos Monos also performed there while they were in London a few weeks ago.

M: You guys toured in Europe with Japanese hip-hop trio Dos Monos? How did that happen?

MS: They opened for our Tokyo show last time we performed here. While watching their show, I felt such a sense I’d never felt before. It might sound corny, but it felt like I was watching a modern Wu-Tang Clan. The energy they give on stage, especially Botsu. I can’t articulate why that is, but that was what I felt. After that, they did a remix for us for our first album, which I think might have been better than the original. And we’ve done some stuff for them, too. And the relationship has remained back and forth.

When thinking about tour support ideas, we don’t generally like artists in a similar world to us. From our personal experience, I love going to shows where the support act is entirely different from the main act because that’s interesting. That has more of an effect.

Dos Monos was one of the artists that came to our head. So, we made it happen, and it was amazing. It was intriguing to see how they’re being received in the UK or Europe because the first thing that stands out was they rapped in Japanese. That was interesting. But also it shows what it is to me about the energy of music. Everyone says music is the universal language, so people didn’t necessarily need to understand what was being said. But, European audiences still felt what they said. Big up to Dos Monos. Those guys are legends.