The blue KitchenAid stand mixer perched by the restaurant cash register confirmed that I had stepped into a little pocket of America in the heart of Azabu. So did the mini-fridge by the entrance, filled with jars of hot sauce. Hidden in the sixth floor of an office building, Soul Food House has served Southern American cuisine in Tokyo since 2015. It’s a popular spot for both Japanese and international customers, who keep coming back for owner LaTonya Whitaker’s famous catfish, jambalaya, waffles and other flavors taken straight from her Mississippi roots.

The space is quaint and dimly lit with orange ceiling lights. An open bar lined with an array of mason jars spans one wall. A canvas of artificial grass stretches across another. Comfortable chatter filled the restaurant during my visit one late afternoon. I arrived after service hours, so most of the customers were finishing up. They dwindled slowly away, chatting with LaTonya and her husband and co-owner David Whitaker on their way out like old friends. “Customers leave feeling like they left home,” LaTonya explains with a huge smile. Apparently, bear hugs from LaTonya are a customary thing (though currently on hold due to social distancing measures, unfortunately). 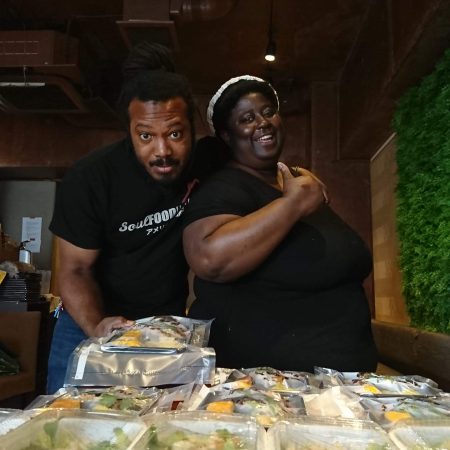 This is LaTonya and David’s 15th year in Tokyo. They’ve made the city their home. LaTonya teaches Southern cooking to Japanese people through her cooking classes. David has built a career in music. Together, they opened Soul Food House after their Thanksgiving dinners proved a huge hit in the neighborhood. Living in Japan has “been amazing, but a struggle at the same time,” David says, laughing wryly as he recounts the times people have come up to him to touch his dreadlocks, or ask for an arm wrestle match. “There’s a lack of understanding from people who don’t interact with us,” he explains.

[O]ur community is realizing that more has to be done about educating ourselves about who we are as people. — LaTonya Whitaker, co-owner of Soul Food House

This is the first time that they are seeing conversations being put forward about the Black population in Japan. After the video of George Floyd being pressed down by police for almost nine minutes went viral, Black Lives Matter protests not only spread across America, but also here in Japan. A crowd of 3,500 people marched in Tokyo. At least 1,000 in Osaka. But there’s still widespread misrepresentation and lack of understanding when it comes to race in Japan, recently demonstrated by a widely condemned NHK broadcast about the U.S. protests.

David visibly shivered when talking about the infamous video that attempted and failed to explain the Black Lives Matter protests in America, instead only succeeding in reinforcing racist stereotypes. The issue, he states, is simply an unwillingness to understand. “LaTonya and I have a program in NHK’s “Eigo de Asobo,” it’s not like they didn’t have access to asking African Americans about what’s going on.” David hopes that the Black Lives Matter movement in Japan will encourage people to try to learn and see what is truly happening.

LaTonya and David believe that they too have a crucial part to play in this movement. “In order to educate the Japanese, we [Black people in Japan] need to know who we are,” LaTonya explains. She tells me with an honest, open expression, “it’s really, really, hard to find that  [Black] community.” There’s no place where they can connect, learn about their history, and stay grounded in their roots. “After the marches are done,” LaTonya says, “our community is realizing that more has to be done about educating ourselves about who we are as people.” 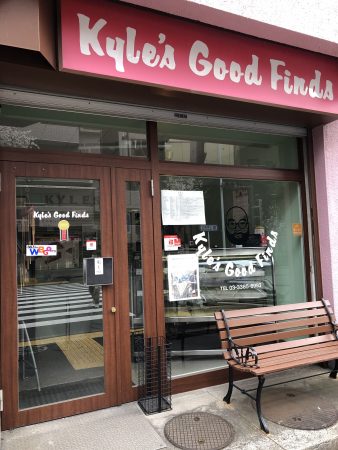 So the couple decided to do just that. The Legacy Foundation Japan, which launches on September 1, is an organization that helps build that tight-kit connection. LaTonya and David hope it will be a space where people can learn about their history and identity. A place where mixed children can cherish both their African American and Japanese sides, and where anyone can learn how to communicate between cultures. It will be “a space in the community,” LaTonya states, “for people to love and appreciate themselves in every aspect.”

For LaTonya, Soul Food House is also that space. “The restaurant taught me to remember who I am,” she says. Southern food, David explains, began with slaves making the most of what little food scraps they had, cooking them with love for their families. I could feel that love in the restaurant. LaTonya laughs as she explains that more Japanese people come up to her saying, “Where’s my hug?” than international customers. “Food opens doors,” she tells me with a glimmering smile, as I get up to leave.

Our next stop was Kyle’s Good Finds, a 25-year-old American bakery in Nakano. It’s run by Kyle Sexton, a New Yorker and “self-taught Japanologist” who came to live in Japan 35 years ago with just $300 in his wallet. The moment I opened the glass door to the 100-square-foot bakery, the warm scent of butter, sugar and vanilla infiltrated my nostrils. There were only a few things left in the glass display, but I managed to snag one of the last brownies. It was fudgy yet crumbly, tasting more like milk chocolate than dark, exactly like the brownies I’ve had at cafes in the U.S.

Food is something we all need to have. — Kyle Sexton, owner of Kyle’s Good Finds

As I sat at the only table in the bakery, Sexton recounted his experience in Tokyo. Over the past couple of decades, he’s gotten to personally know his Japanese customers who come to him for birthday cakes every year, and who always ask, “Amaidesuka? (Is it sweet?)” before proceeding to buy his treats anyway. One of his fondest memories, he tells me, is of a Japanese child who stepped into his shop having recently returned from the U.S. and exclaimed, “It smells like America in here!”

“Food is something we all need to have,” Sexton explains, shrugging his shoulders. That’s why it inevitably builds connections between people. Eating food that someone made is like being gifted a little piece of the chef. I felt a little closer to Sexton after devouring that brownie. Through his food, it seems, Sexton has built a place for himself in Tokyo, and is now an integral part of the Nakano community.

One way to learn a little more about the lives of Black people in Japan is perhaps to go to these shops, run by Black chefs and bakers, to eat their food and welcome their love behind the flavors with open arms.

A wander through old-fashioned Ookayama