Food from the Mediterranean region has yet to find truly firm footing in Tokyo, and there are relatively few restaurants devoted to dishes from the area. Therefore Carthago, an establishment celebrating food from these countries, presents an exciting opportunity.

The restaurant, which opened in 1990, is just south of Nakano station. The lone chef is Japanese, and according to the shop’s extensive website (Japanese only), he and his wife adore food from the Mediterranean region, where they have traveled multiple times. The site includes a summarized history of the region (complete with maps!), and even a few basic recipes for people to try at home. After poring over their in-depth website, I was eager to try their food.

I was the only customer when I entered just after 6:30 PM on a Monday. The décor features pottery, tapestries and wall scrolls from countries in the Mediterranean region. Mellow music was playing; twangs of sitars occasionally punctuated the quiet. It is dimly lit, giving a very cave-like atmosphere to the space. There was only one person working as waitstaff, who brought the menu to the table.

The first page has a lengthy explanation: as there is only one chef, customers are asked to make their entire dinner order at one time so that he can prepare properly. The menu states that any changes or additions to orders may take a long time. Being alone in the restaurant did not present much cause for concern about this, but perhaps it could be a slight problem during crowded evenings. 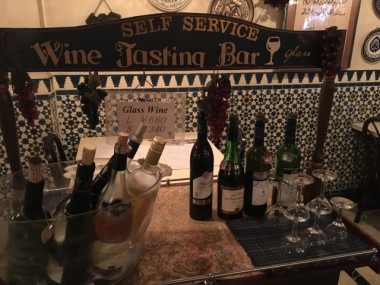 Carthago offers a course including a soup, appetizer combo, choice of main dish and dessert for ¥3,240 a person, but in the interest of exploration I chose the hummus (¥750) with pita bread (¥200), a side of harissa with olive oil (¥400), tabbouleh (¥800), chickpea moussaka with eggplant (¥850), and a couscous fish and vegetable stew (¥1900). The wine list includes selections from countries in the Mediterranean region (which tend to be rather sweet and lacking in body), something hard to come by in Tokyo. There is a self-serve wine tasting bar; guests can choose either a small or large glass (¥340 and ¥680 per glass, respectively).

Soon after ordering, a blender whirred to life in the kitchen. A few minutes later, fresh hummus arrived at the table; thick, but blended to a wonderfully smooth consistency. One concern, however, was the portion size. It is quite large for just one person, and no half-size option was offered at the time of ordering. The pita and harissa-olive oil (with bread) came moments later.

With the first bite of the hummus and warm pita came the rich, almost nutty taste of tahini, made all the more decadent by the accompanying olive oil. The slices of lemon and tomato included with the dish help refresh the palate. The hummus contrasts well with the comparatively spicy and bold harissa-olive oil.

The sound of a knife cutting through fresh herbs heralded the approach of the tabbouleh, which arrived before the first course was complete. While certainly beautiful, this dish too is too large for one person. It is an explosion of fresh parsley and garlic with bits of cracked wheat throughout. Wrapping some of the tabbouleh in the lettuce accompanying the dish helped reduce the punch of the flavors. Though the herbs were extremely flavorful, eating such a large quantity was challenging.

The chickpea and eggplant moussaka came next. Topped with a slightly tangy yogurt, the dish was a hearty follow up to the tabbouleh. The eggplant is fall-apart tender. Onion and tomato play great supporting roles, and firm chickpeas are a nice contrast to the soft vegetables. 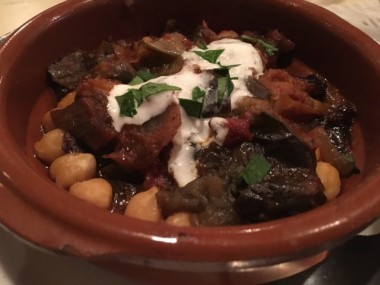 Finally, the couscous and fish came with a side of a lightly spiced tomato-based broth and a side of harissa. This dish is so large it could honestly be a meal in itself! The sauce is poured over the main dish and spice is added to one’s liking. Without these two components it is rather bland. Adding harissa to the broth dilutes the harissa’s bold spiciness but produces greater depth in the other elements of the dish—particularly in the vegetables, which retain the flavor of the liquid they were prepared in.

This meal highlighted Carthago’s dedication to use of fresh ingredients and also made evident that the chef is committed to his food; he does not shy away from powerful flavors. There are dishes suited to multiple dietary needs (vegetarian, halal, and gluten-free). The large portion size, however, makes it difficult to recommend for the solo diner. Additionally, stopping in on a crowded evening may mean a long wait for food to arrive and/or inflexibility in any changes to orders, given that there is only one chef working. To maximize enjoyment, visit with a friend (or three) to sample a variety of dishes.