To the untrained eye, the streets of Shinjuku Nichome look like any other neighborhood in Tokyo. A local ramen shop feeds hungry patrons on their way home from work, a Lawson konbini stands across from a gravelled public park, and a string of unassuming office and apartment buildings fill in the gaps. But on closer examination you may notice a stairwell leading to a row of windowless bars, or a poster above an entranceway announcing “Women Only,” or a billboard promoting HIV testing. You may even catch a glimpse of a rainbow flag or two hanging above a doorframe, but that’s not a guarantee. On your average day these are about the only reasons you would assume you’d arrived at the hub of queer nightlife in the most populated city in the world. 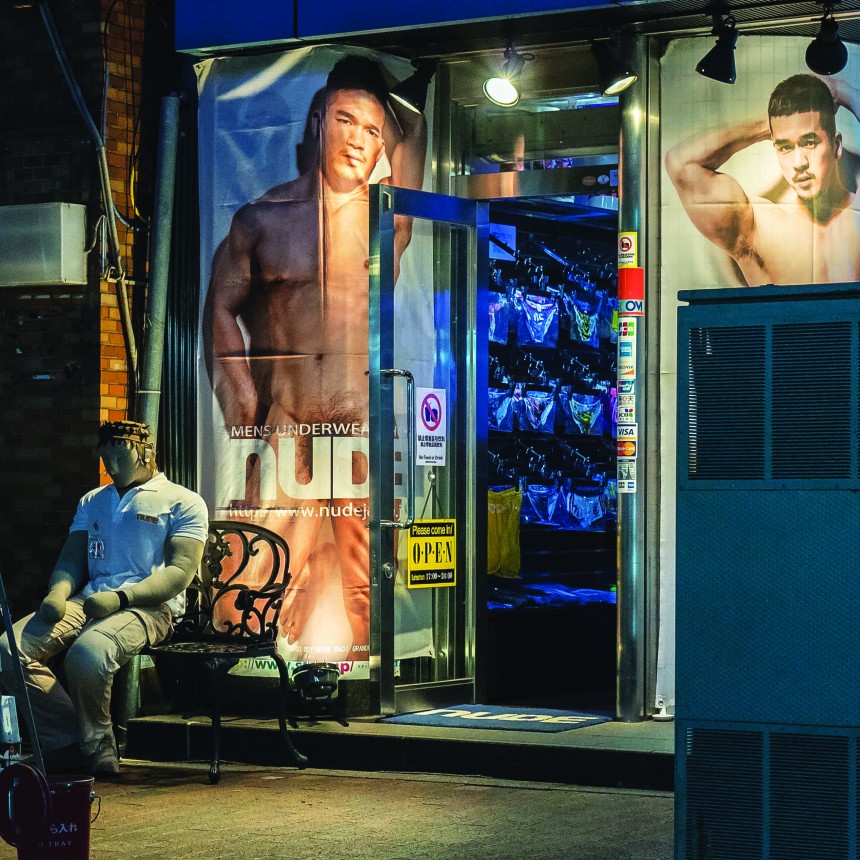 Taking up just a few square blocks east of Shinjuku Station, Nichome is home to an estimated 300 LGBTQ establishments. Everything from gay wine bars and drag shows, to a queer-friendly cafe and a world-famous gay bathhouse are packed into this tiny neighborhood. But it’s not just Japanese LGBTQ patrons that fill the small and sometimes exclusive venues at the heart of Nichome’s nightlife. In recent years the neighborhood has been frequented by straight customers, especially straight cisgender Japanese women. And the more accessible clubs and streetside bars have seen a rise in foreigners and tourist clientele.

This slow but significant transformation over the last two decades has been accompanied by forecasts of the death of a once great “gayborhood” and hyperbolic headlines, including “Is Tokyo’s gay district doomed?” and “Is Shinjuku’s ‘gay town’ threatened with extinction?” While those who’ve called Nichome home for decades are less likely to make these predictions, they have been witness to the neighborhood’s culture shifting under their feet.

Taq Otsuka first walked through the streets of Nichome in 1970. “It was the first time I could freely be myself,” he remembers. While Nichome was a former red-light district for U.S. occupation forces, anti-prostitution laws in 1958 turned it into a neighborhood of shuttered brothels and cheap rents. By the late ‘60s, gay shop owners had moved in, capitalizing on the low property values and centralizing Tokyo’s gay nightlife. It was as this major influx of gay bars and discos hit Nichome that Otsuka found his way to the neighborhood. “After I came to Nichome, my life became very bright.” In 1982, Otsuka opened his own gay bar in the district, Tac’s Knot, which has become one of Nichome’s most well-known “mix bars,” meaning open to all sexualities. It multitasks as an art gallery with a rotating exhibition of local LGBTQ artists. “Since I started Tac’s Knot with my partner at the time, this place has been the foundation of my life,” he says. “For me, Shinjuku Nichome is a wonderful place that has given me friends, partners, a place for self-realization and meaning in life.” 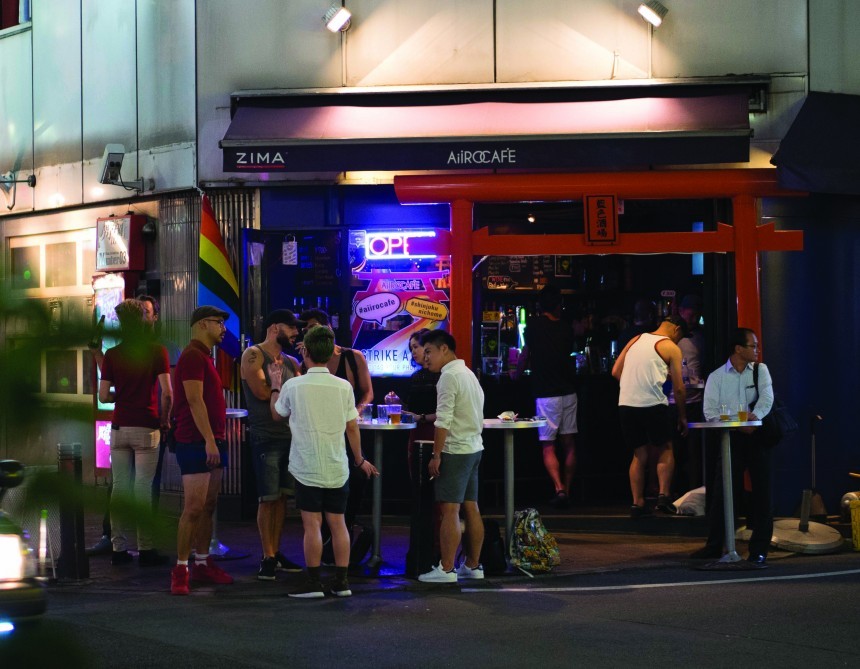 Over the last 35 years, Tac’s Knot has always welcomed straight patrons, but in the last decade Otsuka has seen a noticeable increase at his own bar. While he’s quick to clarify that he serves more gay customers than straight customers, throughout the neighborhood he’s noticed a move towards straight clientele. “I think the existing value of Nichome has fallen for LGBTQ people. Spaces open to gay people are being diversified and now you have opportunities to connect with people on the internet.”

The emergence of LGBTQ-friendly venues in Shibuya and near Ikebukuro, alongside the more established gay subdistrict in Shinbashi, are offering alternatives to the monopoly Nichome once held, says Dr. Thomas Baudinette, an Australian academic who has conducted research on Japanese gay media and sub-cultures. Like Otsuka, he notes that the rise in gay dating apps like Grindr and 9Monsters are drawing people away from the district. But he sees it as an economic trend as well. “Many young men in Japan are finding themselves in increasingly precarious employment and are less likely to have the means to attend a gay bar in Nichome,” says Baudinette.

With LGBTQ patrons on the decline, the neighborhood has shifted its focus towards “kanko” or sightseeing bars, which entertain straight and tourist patrons. The move is partly pragmatic. “Turning to a broader heterosexual clientele is a way to make money in a time of falling profits,” says Baudinette. But many have also argued that kanko bars are a move away from the neighborhood’s notorious exclusivity, with each bar catering to the specific sexual preferences and fetishes of gay and bisexual men. Others say it is part of a cultural exchange. Campy! Bar, for example, gives clients the opportunity to meet and socialize with drag queens, while Onnanoko (Girls) Bar gives clients the opportunity to try drag themselves. “The opportunities to interact with gay culture are increasing and so is the interest in gay culture,” says Otsuka. “I think the needs of Nichome and the needs of straight customers are matching.” 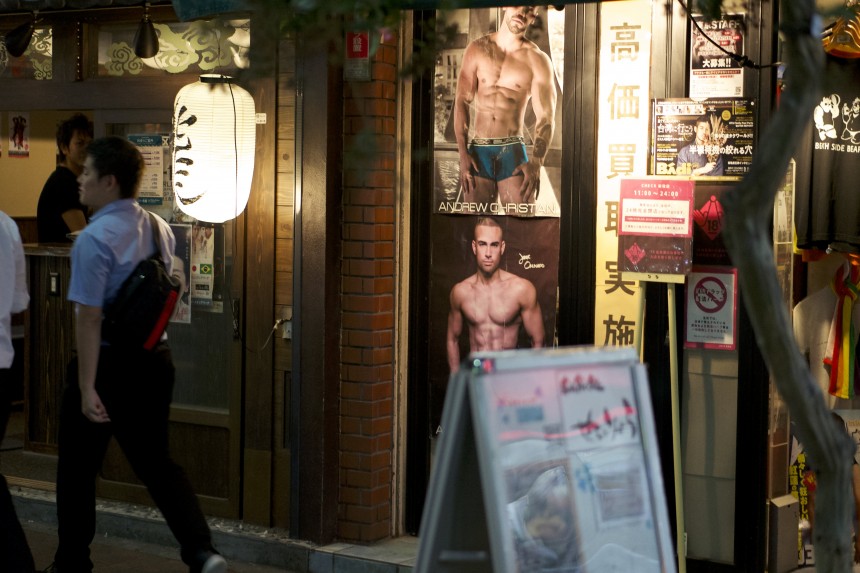 Hide Miyoshi has been a regular of Nichome’s kanko bars for 24 years. The owner of his own mixed martial arts dojo, Miyoshi identifies as straight. “I go because I enjoy the conversations I have with LGBTQ people. I think it’s a better atmosphere and less expensive than other areas in Shinjuku,” he says. In the last decade he too has noticed the increase in other straight visitors to the district. Particularly, he says, the number of straight cisgender women.

While Nichome is known as a hub for all LGBTQ nightlife, establishments targeting gay men have always had the strongest presence. In recent years, however, the number of lesbian bars has increased significantly, including the popular Dorobune izakaya and Goldfinger bar, which has a women-only policy on Saturday nights. But the gay male focus of the district is obvious. Even today, many smaller bars will deny admittance on the basis of gender. For this reason, the rise of the kanko bars has made Nichome accessible to many women for the first time. “More and more bars are accepting of women customers,” says Otsuka. “I think Nichome is opening itself up to the realities of the time.” As a result, straight women have become some of the neighborhood’s most frequent patrons, walking a fine line between treating Nichome as a spectacle and genuinely investing in the community.

Miyoshi says he saw the biggest influx of straight female customers come after the completion of the Fukutoshin Line, a Tokyo Metro line connecting Shibuya, Shinjuku and Ikebukuro, that was completed in 2008. With the Shinjuku Sanchome Station stop only a block away, Nichome was suddenly accessible to populations that previously had never sought it out. “As access to the neighborhood has become more convenient, I feel the customers coming here have become more diverse,” says Otsuka. 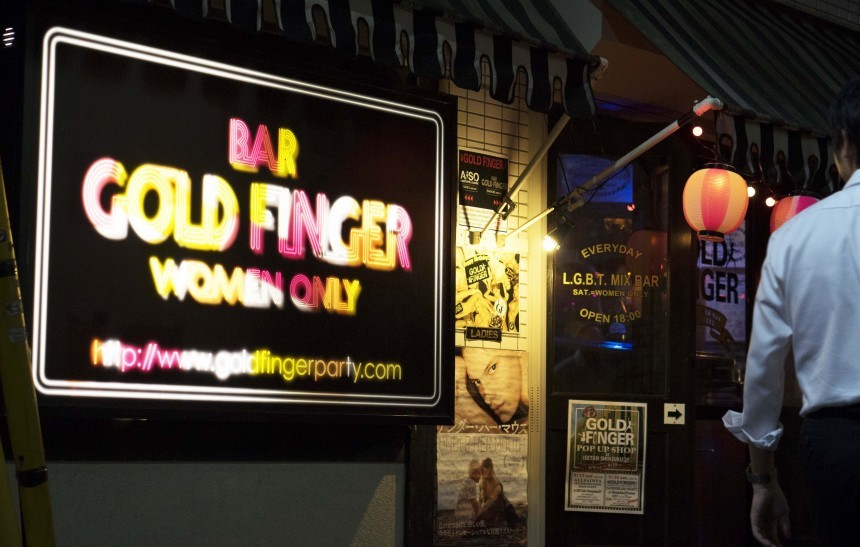 However, the new subway line didn’t just bring new crowds, but also claims of gentrification. Property values have risen in areas alongside the train route. Although few who’ve studied Nichome say the Fukutoshin Line has been directly responsible for the closure of businesses, Hideki Sunagawa, a cultural anthropologist and prominent Okinawan LGBTQ activist, says there is reason to be concerned. “As people move back to live in the center of Tokyo, areas are being redeveloped for residences. In Nichome, some new apartment buildings have been built. If more come, the atmosphere of the neighborhood will change,” he says. “I don’t think a drastic change will happen soon. But it may happen gradually.”

Despite the changing demographics of the neighborhood and concerns for its future, Otsuka doesn’t mourn Nichome’s transformation. Instead he says the neighborhood is “riding the flow of the times.” But like many who have been a part of Nichome since its beginning, he believes there is something special in these cramped bars and narrow stairwells worth preserving, qualities that makes it more than just a place to drink or a source of entertainment.

“There is culture here,” he says. “It would be nice if we could pass that culture on to the next generation.”