The man behind The Pink Cow’s Cal-Mex cuisine

The Pink Cow is a mainstay in the Tokyo arts scene. The cozy atmosphere, warm with a laid-back California vibe, gathers artists and art fans to mingle and perform. The food is also a huge part of what put the Roppongi art space and restaurant on the radar of many Tokyo residents. Renowned for hearty burritos, The Pink Cow has served up a wide variety of Cal-Mex fusion cuisine for over 15 years. Metropolis talks to the man that makes the magic happen, Chef Andy Warden, about the Cow, the cuisine, and the Queen. 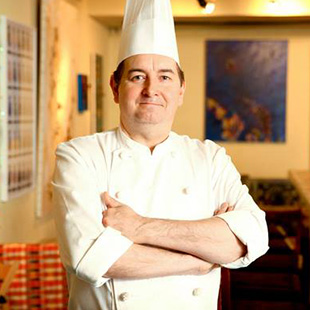 My name’s Andy. I’m a chef. I’ve been a chef for 32 years now. I trained in some major hotels in London, and I worked on the [Queen Elizabeth 2] passenger ship for a few years. Then I came to Japan. I’ve been here with Traci [Consoli, owner] at The Pink Cow ever since.

How did you discover cooking?

I left school at quite a young age: I was 17 years old. I decided to [take] a cooking course at an air force base close to where we used to live, in Kent, England. I did that for six months. I passed, and then just progressed slowly, moved up to London, started my proper training. My training was four years in a hotel, with one day a week in college.

What was home cooking for you, growing up?

Mum was good at roast dinners. Not a whole lot else, to be honest! [Laughs.] Roast dinners, that’s pretty much it, really! My mum’s cooking didn’t have any influence in my moving into the catering industry, to be honest. That came much later. We did own a small hotel when we were children. My mum and dad, they had a small, 11-bedroom hotel in Kent for about seven years. My mother ran the kitchen on the hotel side, my dad did the bar.

What made you decide to come to Japan?

To cut a long story short, when I worked on the QE2 ship—that was back in 1990—we were basically a floating hotel in Tokyo for six months. I met a girl in a bar and, basically, we got together for six weeks; then I went back to England and she followed. Anyway, we got married. She stayed there for 11 years, we had a daughter, and in 2002, we decided to move back to Japan. Probably the best thing I ever did; no regrets. I’m very happy.

Before the QE2, I worked for a hotel called The Barkley, which was part of the Savoy Group in London. From there, I went to the Institute of Directors in Pall Mall. I was a sous chef, then head chef, and I spent 11 years there. And that’s where I left to come to Tokyo.

Word has it you’ve also cooked for the Queen.

Did she give you any feedback?

Not me; I was a fairly junior chef back in those days. We had no negative comments from her, so that’s normally a good sign.

How did you become The Pink Cow head chef?

I arrived in April 2002. I took a couple months off, then I started looking around. I met a lady called Lauren Shannon …  and she put me in contact with Traci. We sat down, we had an interview, we sat down for 10 minutes. And it’s been bliss ever since, he says with a smile!

Did you create the famous Cal-Mex menu?

Pretty much all the menu is done by me. Our base is Cal-Mex—Mexican, Californian—but we do all sorts of international menus for different customers. Whatever people want, really! People get in contact with us, give us a budget, tell us roughly what they want to eat, and I write the menu. And nine times out of 10, it’s pretty successful. People go away quite happy!

How did you come up with the whole Cal-Mex idea for the Cow?

That was Traci’s idea, really! We just looked at ourselves: we’re a Mexican food base, but California style. So she thought, “Cal-Mex” … we put that together, that sounded quite good. So we went with it, and it’s very popular.

What’s most important about food to you?

That you really like—and you really take it very seriously—whatever you’re preparing. You do that a hundred percent all the time, or it doesn’t work out. So you have to be committed and really focus all the time. Even after a long week … you’ve got to love what you do, really.

No signs of stopping for you in the kitchen?

No, I never want to retire! I love it! 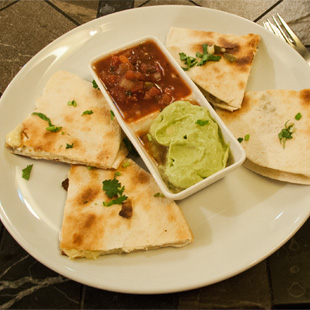 A look inside the Berlin-based artist’s career-spanning exhibition