To take in one of Keeenue’s works is an engrossing task. You follow one thread hoping to find something that will anchor you down to the piece, only to realise, suddenly, that you’ve come right back to where you started, you’ve been going around in circles, and you’re still as lost as before. With its warped figures, eye-popping colour, sprawling lines and chaotic imagery, each piece is an addictive labyrinth, capturing your attention and refusing to let go.

The creative influence of Keiichi Tanaami, for whom Keeenue worked as an assistant for three years while studying design, is unmistakable. “[Before I met him] I thought it was impossible for me to make a living as an artist,” she says of her time under the legendary pop artist’s mentorship. “He told me a lot of things I couldn’t learn at school. I learned what an artist should be, not to mention painting skills.” However, unlike Tanaami, whose expansive, psychedelic worlds address the blurred lines between his dreams, reality and memory, the ideas behind Keeenue’s surreal works are rooted somewhere much more tangible.

“I don’t really remember dreams,” she says, ‘that’s only the theme of my work ‘Dawn Town’ … recently I have often been making ‘connection with people’ the theme for my works.”

In Keeenue’s world, sets of eyes stare at each other curiously while figures are linked by dizzying networks of lines or they are wrapped around each other so that you don’t know where one begins and another ends. Almost every piece taps into our shared cultural experience, illustrating the need for human connection amidst political turmoil and an increasingly impersonal public sphere. “There is something beautiful we’ve never seen before, and something horrible that doesn’t look real is happening around the world. It’s not easy to see the actual situation, but we should try to see it because we are all connected,” the artist explains.

In a metropolis like Tokyo (where the fact of living together is something many people would rather forget) it’s an important message. And as she has already amassed a laundry list of high profile clients in just over one year, including Adobe Creative, Netherlands Board of Tourism, Lipton, Tastemade Japan, and Shake Shack Shinjuku, it’s one that people seemingly want to get behind. 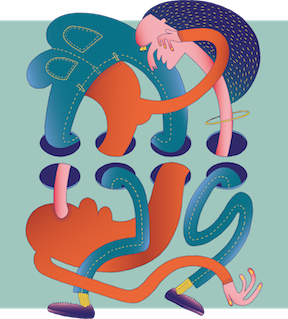 “I’m often told that my works don’t look like a [typical] Japanese artist’s,” Keeenue says of her impressive commercial success thus far, “When I make commercial works, I try to make a good and strong first impression visually … viewers don’t just come to see a museum. Boring visuals make people pass through without looking, I’m always conscious of that.”

It’s the million-dollar question: how does an artist create memorable images in the oversaturated information age? In the spirit of the irreverent ‘60s and ‘70s pop art movement, for which Tanaami became legendary, it’s with a healthy dose of rebellion. “People tend to care for good manners too much in Japan,” says Keeenue, “there are a lot of things we must not do, but not in art. We can discover new perspectives in art.” As time speeds up, making art that requires more than a few seconds of your attention span also seems like a rebellious act.

While we collectively try to forget the more harrowing events of 2017, Keeenue outlines her dreams for the coming year. “I want more people [in Japan] to be interested in art,” she says, her eyes set firmly on the future. “I want to go abroad somewhere I’ve not been yet. I want to see something new.”