There’s been a lot of buzz around last November’s opening of this popular U.S. burger chain, which started 15 years ago as a hot dog cart in New York City. Having never tried the fabled fast food, I thought I would check it out. 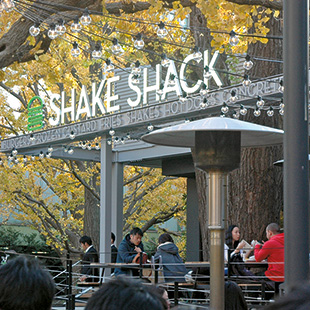 Even in the brisk weather, patrons seemed content dining al fresco on the large front patio. People were eating, and there were lots of smiles. I felt optimistic … that was, until I saw the 65-yard queue that separated me from my sandwich. It seemed I wasn’t the only one to clue in to the buzz, and the line attendant informed me that I should anticipate an hour-and-a-half wait. Granted, it was a Saturday afternoon on a nice day. But an hour and half for a burger? Not today.

My second attempt was slightly more favorable. It was a Monday afternoon, and now, with the queue reduced by around 25 percent, the elusive burger seemed more within my reach. In the end, I waited just under one hour.

You might be asking yourself—as I did numerous times standing in the cool December air waiting for a hamburger—whether all of this is worth it. And the simple answer is “yes”; Shake Shack is a revelation in fast-food dining.

In a world where hamburgers have evolved into artworks of bewildering gourmet complexity, Shake Shack, which opened its first official restaurant in Madison Square Park, New York, in 2004, provides a simple and tasty alternative. The chain describes itself as a modern-day “roadside” burger stand, and offers an extensive selection of comfort-food favorites like burgers and hot dogs, as well as a range of signature—and delicious—custard shakes and a house-label craft beer.

You won’t find any kale-infused chickpea patties at Shake Shack. What you’ll find are tried-and-true classics like the ShackBurger (¥680-980), a single or double 100-percent Angus beef cheeseburger with lettuce and tomato, and not much else. Alternatively, you can step it up with the SmokeShack (¥880-1,180), adding all-natural applewood-smoked bacon.

The menu also includes the signature Shack-cago Dog (¥580), a Chicago-inspired hot dog with nine toppings. The Crinkle Cut Fries (¥280-600) are also noteworthy; although they look like those much-loathed frozen fries in giant packets at the supermarket, they’re amazingly crisp and tasty and—for those looking to go all out—come generously smothered with molten cheese. Vegetarians are also well-catered to at Shake Shack with the ‘ShroomBurger (¥930), which substitutes the meat patty with a crisp-fried Portobello mushroom.

Shake Shack has evolved over the years into a fast-food phenomenon with stores popping up all over the world, including locations in Russia and Saudi Arabia. Amazingly, the Tokyo restaurant is the first Shake Shack to open in East Asia.

The Tokyo restaurant models itself on the flagship Madison Square Park branch, which is so popular that a 24-hour webcam was installed to monitor wait times via live streaming over the company’s website. According to Randy Garutti, Shake Shack CEO, the Meiji Jingu Gaien location came after a determined hunt for the perfect spot in Tokyo.

“The original Shack in New York City’s Madison Square Park created a place for New Yorkers and visitors alike to gather as a community. We’ve searched far and wide, and we’ve found that same feeling again in Meiji Jingu Gaien,” said Garutti in a statement.

Shake Shack Tokyo is certainly something to be optimistic about. In a city like Tokyo, where burgers are undergoing their golden age, the franchise is a worthy contender for the top spot, and I wouldn’t be surprised if other locations pop up in the coming months and years. All they need now is a webcam.

The depths of despair