Never lets up until the lights go out

Dairakudakan, the world-renowned butoh troupe led by Akaji Maro, has been thrilling audiences for decades with their ultra-physical performances which reflect all aspects of humanity and the elation, creativity and ultimate futility of the human experience. Many will testify that there is nothing quite like a Dairakudakan performance. Magical, primal, ethereal and essentially unknowable. 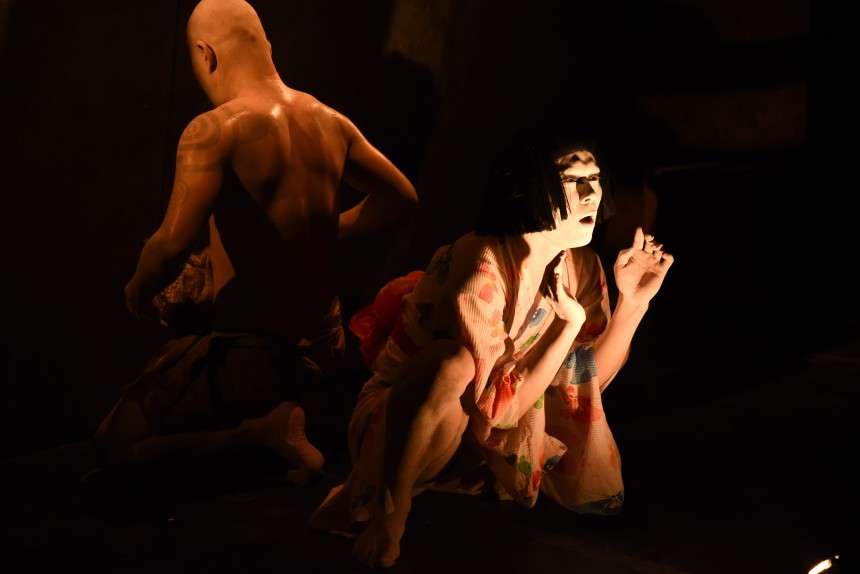 The company’s latest performance, “Bawdy frog,” led by performer, choreographer and director Ikko Tamura, is an intimate affair at the company’s own studio in Kichijoji. With seating for about 50 people this is very much in your face theater. It’s inspired by Tamura’s earlier trip to a group of ancient huts in Kyushu which spawned an imaginary and ancient underworld inhabited by frogs.

“Frogs have been dancing in my mind.” Tamura explains. “The frog has many characters in human history. In ancient Egypt the frog was a symbol of the embryo and in China, a bringer of good luck and property and in the west a symbol of wizardry and unluckiness and so on. Also frogs just live. We also just dance. I would like to identify the frog and us with familiar and new images.”

It’s an intimate and frenetic performance, almost entirely non-verbal, cleverly using music and lighting and set design to full effect. The all-male performers covered only by loin cloths, shaved heads and covered in white makeup writhe, dance, spit, float, lift and climb throughout the performance which is quite simply as intense and intoxicating as you’re going to get. Beautiful, funny and spiritual it examines the creation and experience of all living beings and never lets up until the lights go out. 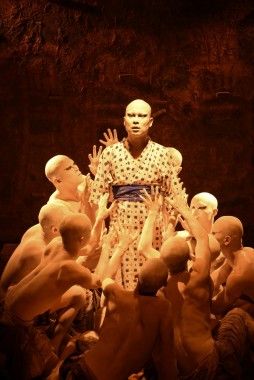 The troupe also embodies the spirit of collectivity seen in European groups such as Ariane Mnouchkine’s Le Theatre du Soleil which sees performers mingle with the audience after the show wearing makeup whilst chatting and drinking with each other. It’s a successful and friendly method of demystifying the theater experience. “Bawdy frog”, then, is a riotous experience but at the root of it encapsulates the more primeval aspects of humanity and we’re ultimately reminded that the word “butoh” means “dance of darkness”.