Usually, Dominique Ansel gives the staff working at his bakery based in Tokyo’s Omotesando neighborhood a warning before dropping in. In late 2016, the French-born chef and restaurant operator tells Metropolis that he paid a surprise visit to the staff at his nearly two-year-old shop.

“They were very surprised,” Ansel says. “We wanted to see how they were doing day to day. They were doing very well. Very organized, all the food was right on, no big surprises,” adding a laugh after that last review. 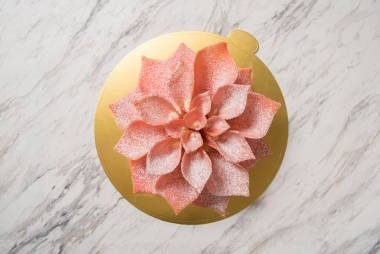 That “gotcha visit” served as a big milestone for the Omotesando store, which still manages long lines of Tokyoites eager to try Ansel’s signature dessert hybrid, the Cronut, along with a variety of Japan-only confections. It signalled that the Omotesando bakery had settled in, the employees operating it were trusted to handle everything on their own.

That’s not to say Ansel isn’t in touch. “I talk to the team daily. I use LINE to communicate, Skype. They share all the information with me,” he says. “We are a new generation of cooks, of baker.”

Now, Ansel will be doubling his time focused on Tokyo.

This week, the second Dominique Ansel Bakery in the capital opens up in Ginza’s Mitsukoshi department store. Alongside the sweets he has made his name on—besides the Cronut, Ansel’s known for his take on the classic French Kouign-amann and his Frozen S’more, all of which are tasty and Instagram like-bait—the store will sell special items only available there. They include raspberry mousse cakes shaped like square watermelons to a hot dog bun resembling…a pooch.

“It is always a new challenge to grow. But a very exciting and fulfilling one,” Ansel says ahead of the store opening. “We never just cut and paste, but try to always do something unique and different.”

This guiding principle is what earned him a chance to open two bakeries featuring his name on the marquee in Tokyo, along with several in New York and one in London. After stints working with French bakery Fauchon and New York’s celebrated restaurant Daniel, Ansel opened his first store in Soho in 2011.

Two years later, the Cronut appeared and turned him into one of the most discussed pastry chefs of the decade. Despite only being available in NYC, the donut-croissant hybrid captured international attention, including in Japan. Various attempts at replicating Ansel’s pastry popped up around the city. Even national chain Mister Donut got in on it, releasing the “Mr. Croissant Donut.” Opening a Dominique Ansel shop in Tokyo, then, made sense. Even moreso when factoring in the chef’s personal love of the country. 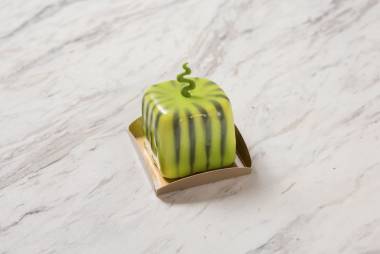 “I get inspired a lot by Japanese cooking in general. Just the way they cook, the ingredients they use, the tradition that goes into the food,” Ansel says. He recalls being fascinated by the nation as a child, watching television back in France. “I always wanted to learn more about it. What got me the most, was the passion and dedication people had for…any craft. Anything they love, they dedicate themselves to what they learn.”

The Dominique Ansel Bakery in Omotesando opened in 2015, to hour-long lines and much local fanfare. Initially, Ansel says the store focused mostly on items that were available in New York. “But now it has kind of switched around. We’ve created over 100 new pastries here in one year, and that makes up 70 percent of our menu.” Those Tokyo-only entries have ranged from an ice-cream-sandwich-like onigiri, to a French “yule log” Christmas dessert shaped like oden. Ansel’s daily conversations with the team tend to spark new ideas, which both sides then develop into a final form.

The continuing roll out of new, mostly limited-time items have kept Dominique Ansel Bakery Japan in the spotlight. Whereas Tokyo trends shifted away from New York to all things Portland, Ansel and his team simply kept at their own thing. The end result has been a store that always feel filled…and tends to have a small line, at least. 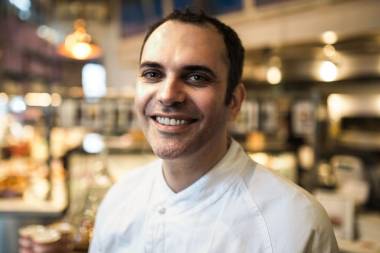 And it keeps Ansel busy. The chef says he has traveled to Japan over 20 times in his life, a figure that picked up quickly after the Omotesando store opened up. “Everytime, I need to find new food,” he says with a laugh, pointing out his latest foray into the city’s dining scene was Narisawa (“That’s a perfect example of reaching the Japanese roots when reaching the ingredients and techniques”). He’s come here so much his knowledge now extends to anthropomorphic food — when he sees my file featuring the popular Sanrio lazy egg Gudetama, he lets out an excited little shout of “Gudetama! I love Gudetama.”

As his second store prepares to open its doors in Ginza, here’s hoping Ansel is ready for even more trips out to Japan.