The first six months of 2019 have been full of surprises for Tokyo music project Dos Monos. The trio released their debut album Dos City in March, and soon found themselves getting attention from outside Japan. “We’ve done performances in the past, but this is really the first thing we’ve put into the world,” member Taitan Man tells Metropolis in late June.

Since releasing that full-length, though, they’ve made strides both at home and internationally. The album came out on American label Deathbomb Arc, which has released critically acclaimed acts such as Death Grips and JPEGMAFIA. The release party for Dos City attracted 400 fans to Shibuya’s WWW venue, while they’ve picked up a decent amount of English-language attention, including a favorable rating from influential music critic Anthony Fantano. “Most likely, the experience you have with this album will be unlike the experience you have with any other hip-hop album for the rest of 2019, I can guarantee that,” Fantano said in his review.

Dos City indeed delivers on that promise. The 35-minute-long album finds the group — consisting of members Botsu, Taitan Man and Zo Zhit (they ask not to share their real names, due to concerns regarding their day jobs) — taking samples of jazz and progressive rock, dynamiting them into smaller chunks that make for an at times disorienting musical backdrop. Over these beats, the trio deliver tag-team raps in Japanese and English, often times approaching an abstract approach to lyrics that boggle minds in any language.

For many living outside of the country, Dos Monos might be their gateway into Japanese rap, a corner of the nation’s music community that has long been hyped up as the next big thing but which up to this point hasn’t actually delivered a sustained global breakthrough. Dos Monos themselves, though, see things a little bit differently when asked where they fit in Tokyo’s hip-hop scene.

The three members of Dos Monos have known one another since junior high school, as they are all the same age (25). “Me and Taitan Man used to sit next to one another in class,” Zo Zhit says. “I want to say that the two of us talked about [rap] music but at the time we were into J-pop and J-rock, like Mr. Children.” Batsu says that his gateway into music came via pop-punk, through bands such as The Offspring and Sum 41.

All of them were involved in bands by the third year of junior high school, with Taitan Man and Zo Zhit playing in what they describe as a grunge rock outfit and Botsu preoccupied with a more punk-oriented group. Despite being close, they didn’t start working together until they formed Dos Monos in 2015.

“I started to make lots of hip-hop tracks around that time, but I didn’t want to start any projects by myself,” Zo Zhit, who creates the group’s music, says. “I wanted to have friends with similar music tastes with me. None of us had really experienced hip-hop music before, so we jumped into it together.”

Zo Zhit says he had developed an interest in jazz and progressive rock, and that he was turning to these genres as a source for samples. He was also getting into a handful of Los Angeles artists, like Flying Lotus and Madlib, who were using similar sonic ingredients to create mind-melting music also influenced by rap. Taitan Man and Botsu followed a similar path, and to hear the latter talk about how he learned more brings to mind the same path many coming from outside the hip-hop community came to the style in the mid 2000s.

“One of my favorite bands is Animal Collective. I think the member Panda Bear named [rap producer] J Dilla’s Donuts as one of his influences. I got into it from there.”

Their eclectic tastes also shaped the group’s name, which is Spanish for “two monkeys,” as Botsu says they were inspired by listening to lots of Latin music. “It’s maybe basic, but it’s also like what Yellow Magic Orchestra did … because we are yellow monkey,” he adds. “I didn’t want us to be named in English, because that’s everywhere, and putting ourselves in the world with an English name isn’t so interesting.”

Tracks that Zo Zhit worked on from the very start of Dos Monos eventually made their way onto Dos City after a lot of tinkering. Zo Zhit would make a beat, and then all three would get together to work on the lyrics. “I make a theme for each song, and we work on the lyrics. It’s just whatever image I have in mind while making the song,” he says. He points to the song “Muffin” — featuring a prominent vocal sample from another Dos Monos favorite, Frank Zappa — as being a good example. His goal was to create a song that sounded like a muffin. 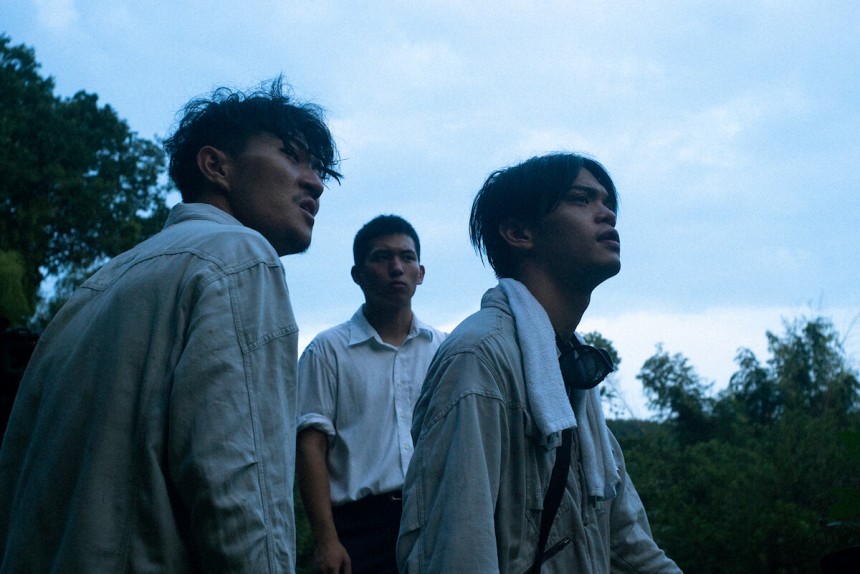 Other times, the trio played word games to put together lyrics, like for the provocatively titled “Abdication B4 He Dies,” in reference to the recently retired Emperor of Japan. They say they started with the idea of creating the “Empire sound,” and had an imagination exercise to get the words. It’s a common approach for Dos Monos, and they liken their lyrics to that of American rock band The Mars Volta in that it’s more about how they sound than message, although they believe listeners can definitely find the meaning they want within.

Rap proves to be a critical element of the Dos Monos sound, but part of their success can be attributed to their outsider status. While a handful of older Japanese artists in hip-hop have a similar dis-orienting sound rooted in jazz, Dos Monos stand out in 2019 because they aren’t concerned about imitating the sound of American rap like so many other musical compatriots. The distinctive sound they’ve cultivated has helped them overcome the language barrier, and made them one of the most interesting musical exports out of Japan in recent memory.

“People don’t have to understand us now, but maybe sometime in the future, a language researcher, someone who understands English and Japanese, can study our lyrics,” Zo Zhit says, adding with a laugh, “That’s my dream at least.”