Echoes of the Past

Confessions of an anonymous urban explorer

If there’s one time of year that’s perfectly suited to the subculture of urban exploration, it’s Halloween. Every major ruin in Japan has its own ghost story or urban legend. Some stem from tragic, real-life incidents; others—like the Himuro Mansion—are pure fantasy. My interest in ruins has taken me to prefectures in Japan I never thought I’d visit, into buildings I was never supposed to enter and have adventures I will never forget. Over the last six years, I’ve managed to avoid arrest, injury and confrontation.

However, for those tempted to venture out on All Hallows’ Eve, I have a number of cautionary tales to share.

My first haikyo trip on the outskirts of Saitama prefecture was an embarrassingly paranoid experience. Misjudging the amount of time it would take to get to my location, I ended up walking alone for over an hour down an isolated country road. As the sun started to go down, the leaves on the ground seemed to stalk me—stopping exactly when I stopped; scuttling behind me only when I moved forward. When I finally reached my destination—a run-down love hotel—an unknown beast in the undergrowth continuously circled the building but never showed itself.

The whole experience was overwhelming to the point I swore I’d never do it again. But I soon realized that urban exploration is an experience best enjoyed in hindsight. As the fear began to wear off, and the photos of my exploration circulated online, I was already thinking about my next destination.

“Whatever you do, don’t get sucked into this,” my wife warned me. It was already too late.

Visiting residential ruins is a line I’ve crossed and regretted. Even if you’re completely sure a residence has been abandoned by its original owner, there may still be some unofficial residents living there. Such was the case in Nagano, where I entered a broken residence with a dubious new tenant. 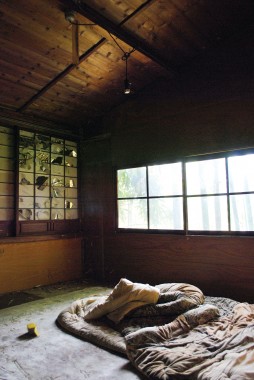 The first clue that I’d stepped into the wrong building was a series of disjointed children’s pictures scrawled on the sliding doors through which I’d entered. The second: a giant knife positioned next to a recently vacated sleeping bag. This was enough to see me scrambling out the door and running down the road.

Exploring ruins in a group can also be a lot of fun. Several years back, Michael John Grist, the explorer who gave me my first map, invited me along on a road trip to the Izu Peninsula with a couple of his friends. Their good-humored camaraderie was a stark contrast to the paranoia to which I’d grown accustomed, and if it weren’t for them, I probably would have missed out on seeing one of Japan’s greatest ruins.

So have a happy and exploratory Halloween. And as always: “Take only pictures; leave only footprints.”

The Open Paths of Tokyo

Pedal or relax around Lake Tama

Thrills and chills on the slopes of Hakuba

Back in Time at Kawagoe