At the extreme end of the spectrum, good fashion gives you fully-formed characters to play with. Designers offer complete worlds to romp around in, and of course, a fitting outfit in which to do it. The concept of a character creating an actor was the theme of the Chara Chara Area, a new addition to Tokyo’s most prestigious fashion trade show “Rooms,” recently held in the Yoyogi National Gymnasium. 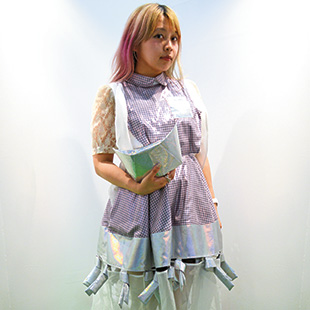 Setting the mood of the area was Saganosuke Reichel, whose grotesquely cute style has long reverberated over the city, deco-ing everything in its wake, from bikes to daruma.

Leading the lineup was new brand Lactose from American Brandon Reierson, who scooped the prestigious Kameyama Award with his first full collection. Entitled “Fashiolodeon,” the collection explored the Nickelodeon cartoon universe with a print-heavy collection that looked at nostalgia for childhood, and why it exerts a hold on us even in adulthood. We seem to strive to be something new; at the same time, we cannot shake how important our formative experiences in childhood are. Moreover, do we ever really want to let go of our childhood?

The depth on offer clinched the award in what was otherwise a light-hearted trip back to the 1990s, featuring the designer’s own lineup of characters who could have stepped out of the cartoons playing on the booth’s suitably retro CRT television, as well as the era’s fashion essentials—including oversized hockey jumpers and Buffalo platforms.

Elsewhere, Taiwan-based Dario—who enjoys a fanatical following in Harajuku—offered a dreamy world packed with translucent fabrics and transparent plastics that veered away from the body, or featured carefully placed cutouts, all of which rendered the person clothed, but vulnerable. The effect was particularly noticeable in the showpiece items, where oversized ensembles seemed to stand away from the wearer’s body entirely, creating silhouettes not unlike character mascots but still revealing the person inside. 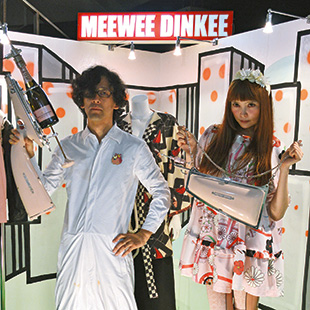 Meanwhile, MeeWee Dinkee, the fashion brand from anarchic musicians Maywa Denki, went with a Japanese warrior-inspired collection, finished with rifle butt-shaped clutch bags, perfect for those who want to fight off the attention of street fashion photographers.

Bringing in the kawaii was social media star hima://kawagoe, who’s moved from semi-salacious subcultural illustrations to fashion, adding Cardcaptor Sakura-style wings to accessories, robot armor to tights, and anime eyes to anything that moves. The standout pieces from the designer’s collection took her own otaku culture-heavy lifestyle to fashion, bringing in a penchant for anime binges to bed, with wearable pillows turning up in scarves, backpacks, and bags; and a host of bedding-themed items designed for snoozing anywhere.

Those not looking for the complete look were catered to by Holy Crap!, a new line of footwear designed with the sole aim of soliciting the aforementioned exclamation from its customers. Designs popular with attendees included shoes decorated with manga-style onomatopoeia sound effects, sure to add impact to your stance, as well as toothed heels that could serve as armaments in rush hour.

Away from the Chara Chara Area, the honorable mention from the “Rooms” exhibition goes to breakthrough brand Kisaburo, whose modern take on traditional kimono flitted effortlessly between tailoring and pop-culture references. Of note was a black salaryman suit reworked into a traditional Japanese style, including hakama trousers the designer provocatively displayed in front of a ukiyo-e of Commodore Matthew Perry’s infamous “Black Ships.” Definitely one to watch.