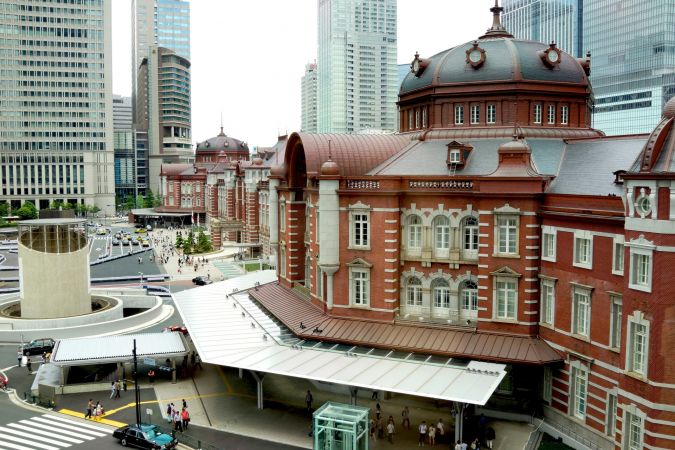 Image by chihiro sakai from Pixabay

Despite being one of Tokyo’s busiest subways, the Tokyo Metro Chiyoda Line is one line that seems to ride under the radar. Opening in the 1960s, Tokyo’s green line now journeys through twenty stations, starting in the city’s southwest, through some of the capital’s biggest-hitting stations before ending its trip amidst the local character of Tokyo’s north-eastern wards. 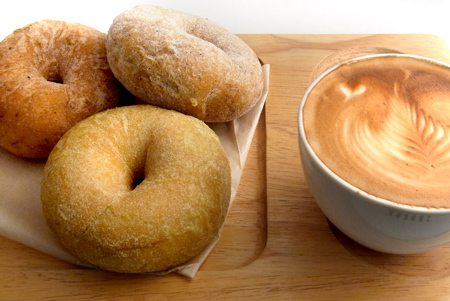 The line starts off at Yoyogi-Uehara Station where Haritts Donuts & Coffee turns out to be as tasty as it is easy to miss. Hidden away in a seemingly ordinary looking home, the handmade donuts here sell out fast while the retro interior keeps the experience personal. 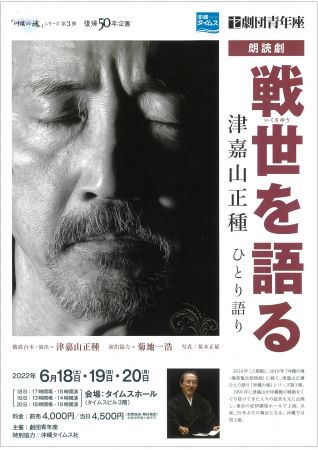 Yoyogi Park needs little introduction but Yoyogi-Koen Station also offers the chance to take in a modern shingeki theatrical performance. At the vanguard of modern theater, Seien-za Theater Company was established in 1954 and continues to produce scores of talent. 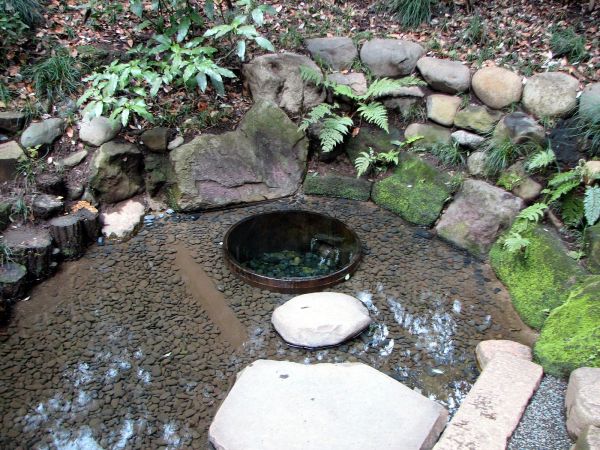 A stroll from Meiji-Jingumae Station to its namesake shrine is a no-brainer but tucked away within the shrine grounds lies Kiyomasa no Ido. This Edo period water well, now a famed power spot, was said to have been dug by a religious hardliner with a penchant for building. 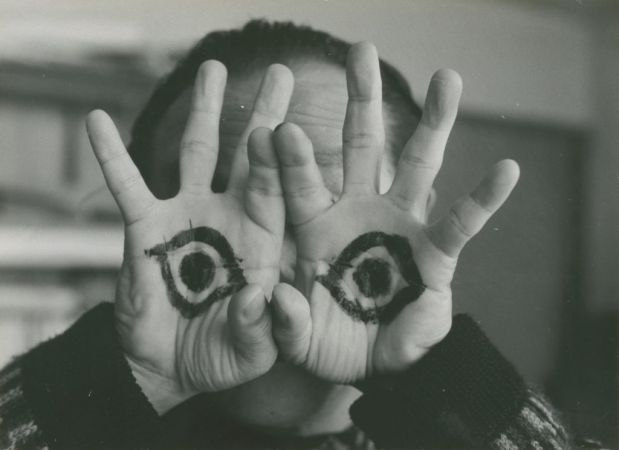 Surrounded by some seriously aspirational window shopping, Omote-Sando Station leads to the extraordinary Taro Okamoto Memorial Museum. Inspired by Japan’s ancient Jomon past, Okamoto’s works are utterly invigorated by his claim that art was an explosion.

Nogizaka Station’s high-end residential appeal features a somber note. Nogi Shrine is where, in 1912, General Nogi Maresuke and his wife, the Lady Shizuko, created a national stir when they ended their lives in a ritual suicide pact following Emperor Meiji’s passing. 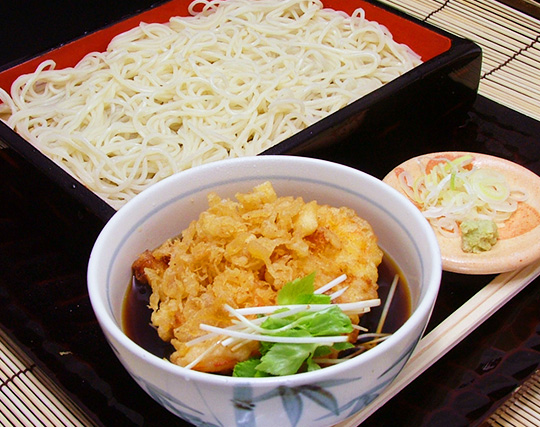 Head south from Akasaka Station towards Akasaka Hikawa Jinja, once a personal shrine of the eighth Tokugawa shogun Yoshimune, and visitors will find Muromachi Sunaba Akasaka. This local bar has been serving handmade soba noodles since the 1960s. 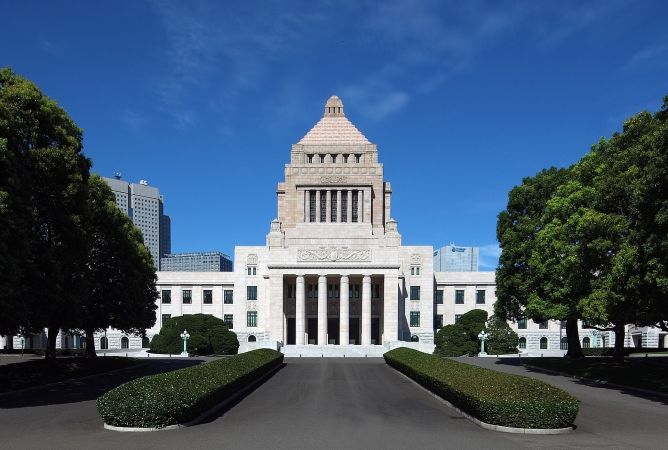 Doorstep to the heart of Japan’s government, Kokkai-gijidomae Station sits right by the country’s National Diet Building. A bulwark of political power, the grounds are also home to Todoufuken no Ki, a park featuring trees donated from each of Japan’s 47 prefectures. 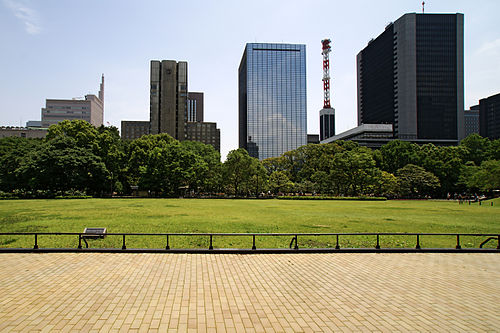 Bordered by government ministries, Kasumigaseki Station starts off on an imposing foot. Its position by the popular Hibiya Park, though, manages to soften the step with nods to local history like the Meiji-period arc lamp built when the park was first established. 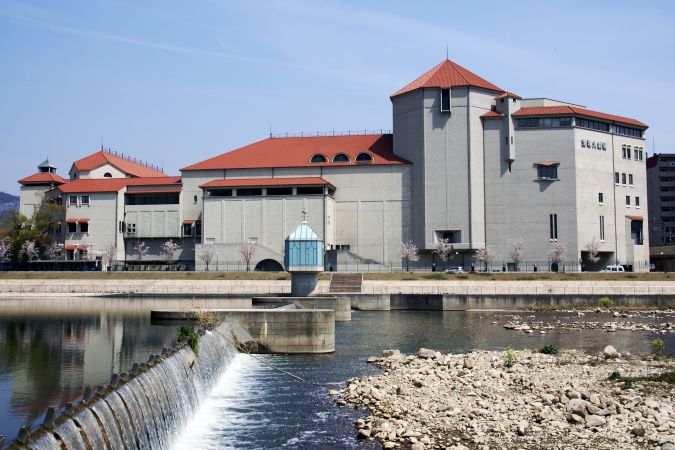 Hibiya Station steps away from the intense government polity of previous stops with an all-star cast of theaters. One of the most popular of these is flamboyant Tokyo Takarazuka Revue whose five all-female troupes perform regularly to sold out shows. 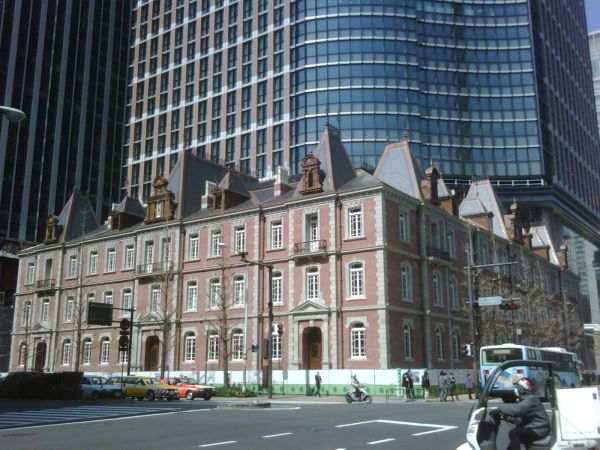 Down the road from Nijubashimae Station and the Imperial Palace stands Mitsubishi Ichigokan Museum. The district’s first Western-style office building, it reopened as a modern art museum in 2010. Continuing the taste are the British and French flavors of Rose Bakery. 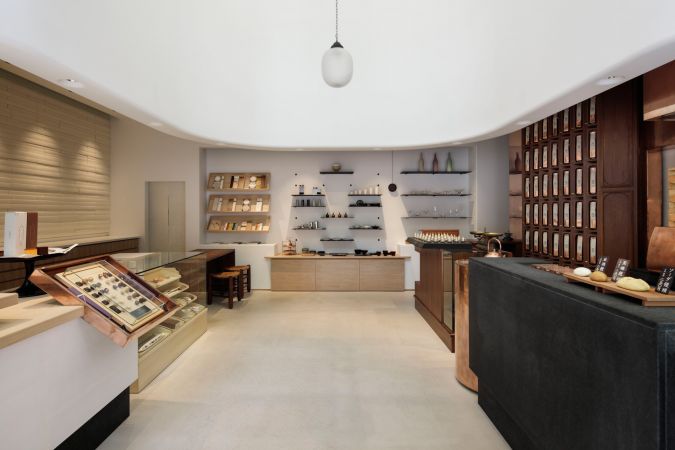 The palace may continue its dominance through Otemachi Station but in the other direction lies Higashiya Man Marunouchi. This modern Japanese confectionery store serves up a cosmopolitan array of traditional sweets and the relaxing option of pairing them with tea. 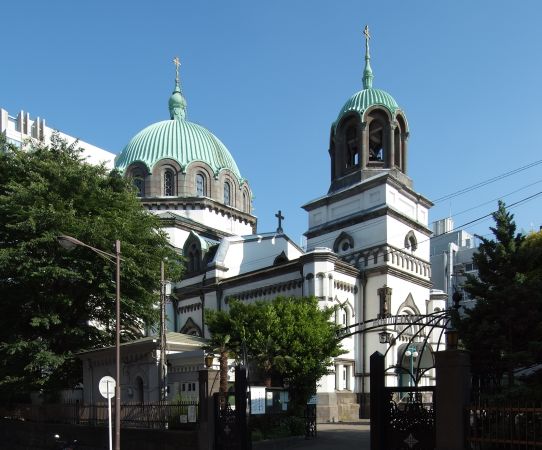 Step out of Shin-ochanomizu Station and the Holy Resurrection Cathedral, completed in 1891, is an impressive Byzantine architectural sight. For a palate-pleasing heritage, try Sasamaki Kenuki Sushi, established in 1702 and still using techniques from the Edo period.

Image by Daderot – Own work, CC0

Shedding political overtones, the line continues with Yushima Station. Yushima Tenjin, a shrine famed for learning and plum trees, is close. So too is the elegant Kyu-Iwasaki-tei Gardens estate and the punchy taste of Menya Genzo Yushima’s spicy tantan-men noodles. 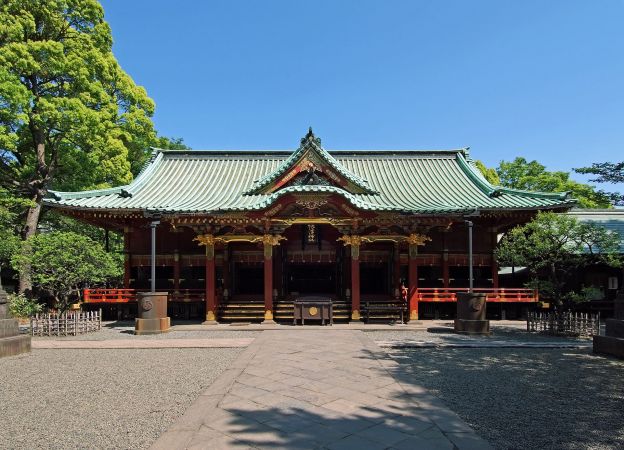 Nezu Shrine is the surprise of Nezu Station. With a torii tunnel reminiscent of Kyoto’s Fushimi Inari Shrine, 3,000 blooming azaleas during the Azalea Garden Festival and several heritage-listed buildings, this old Edo shrine is often called Tokyo’s most beautiful. 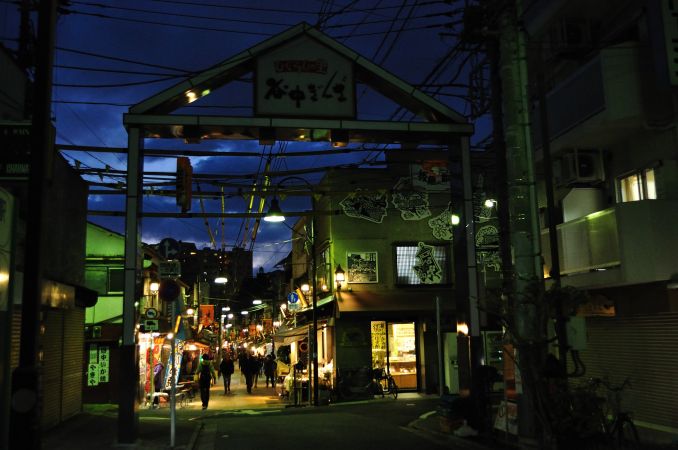 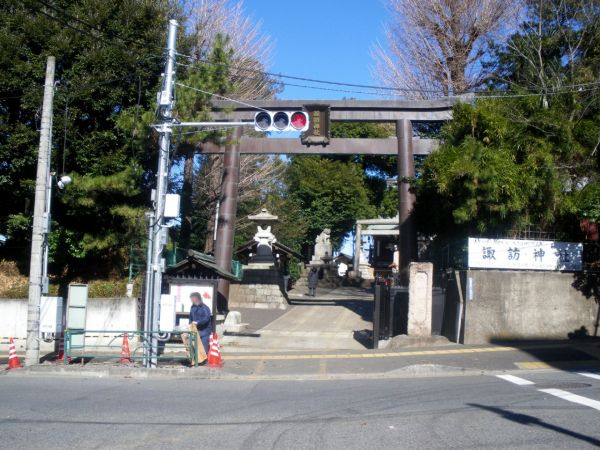 Downtown continues with Nishi-Nippori Station and a small swathe of temples and shrines. Built in 1205, the most famous of these is Suwa Jinja, having been immortalised through ukiyo-e woodblock prints by Edo-period artists Kasamatsu Shiro and Utagawa Hiroshige. 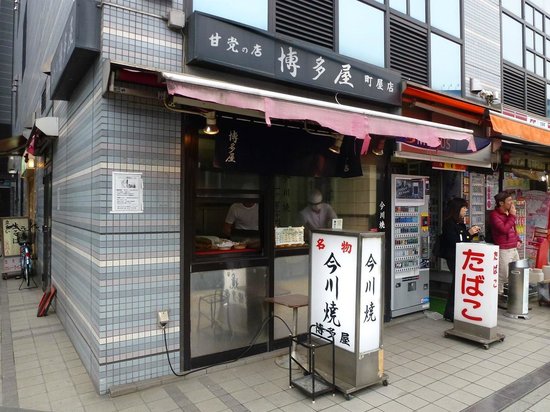 Eschewing any pretense to glamor, Machiya Station dips into local Japan with stores like Hakataya. Specialising in Imagawayaki, pancake-like buns filled with anko sweet bean paste, these voluminous snacks have been filling bellies since the late 18th century. 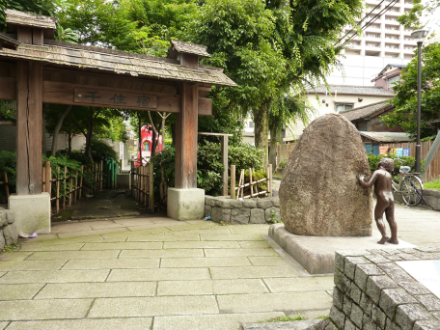 A major transport hub it may be but Kita-Senju Station remains shitamachi to the core. A former Edo period post town between the Sumida and Arakawa rivers, the area is replete with traditional shotengai shopping streets like Shukuba-Machi Dori and Senju Honcho. 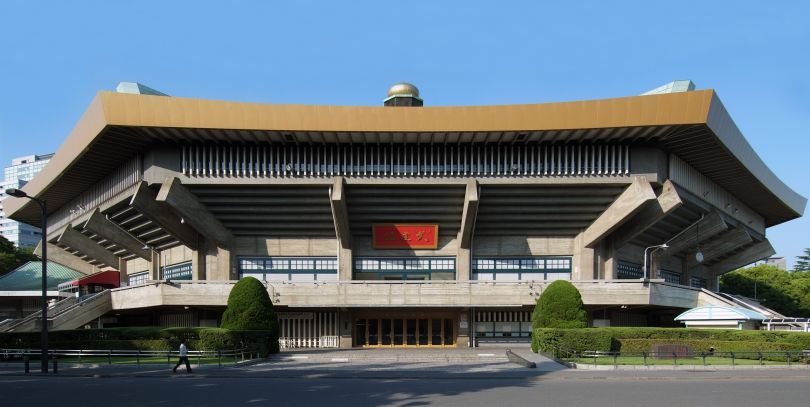 Ayase Station strikes hard with the eclectically designed Tokyo Budokan. This huge martial arts complex attracting practitioners from across the world is a short stroll from Ramen Shop Chukichi. The noodles here, topped with thick slices of beef, are not for the faint of heart. 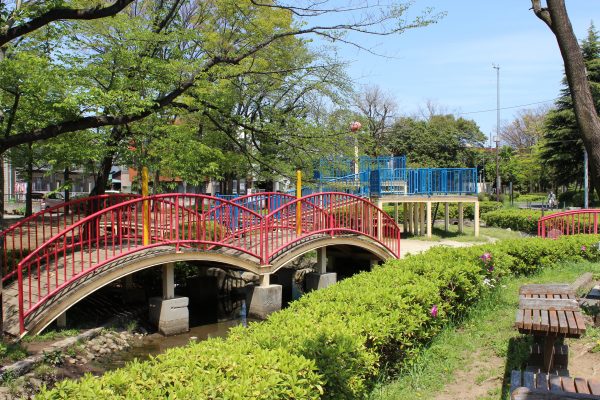