Kōyō in (and out) of the city 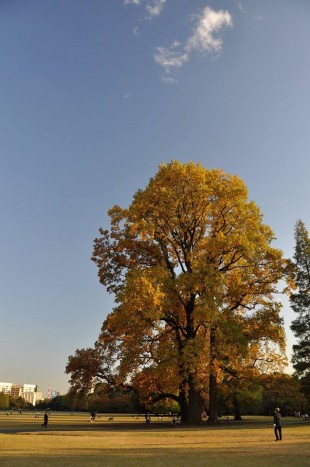 Anyone who’s been in Japan for a while—or anyone who’s paid any attention to the travel brochures at train stations—knows the country is big on its four seasons, of which each has its own “must-see” natural wonder. Spring’s cherry blossoms, however, quickly fade, and summer and winter have a certain temperature-based unpleasantness about them. Fall brings a perfect balance of warm-cool, and with its principal natural delight—changing leaves, or kōyō—on display from October to December, it lasts long enough for even the busiest foliage fans to get in some leaf time.

Obviously, location plays a part in how early or late the leaves change, but Tokyo is looking at mid-November to mid-December for the most part, with mountain areas starting earlier. So throw on a cozy coat, pack yourself a bento (bonus points for fall-themed lunches), and head out for some brilliant fall hues.

You can find a number of parks presenting prime fall foliage even without stepping outside the city.

Inokashira Park, straddling Kichijoji and Mitaka, is known for its maples, though its cherry trees also turn a lovely shade of red. Rent a paddle or swan boat (but maybe not if you’re on a date), and enjoy the view from the water. Those with young children should check out Inokashira Park Zoo, where the small entrance fee tends to keep the area less crowded than the rest of the park. Nearest station: JR Kichijoji or Inokashira Koen 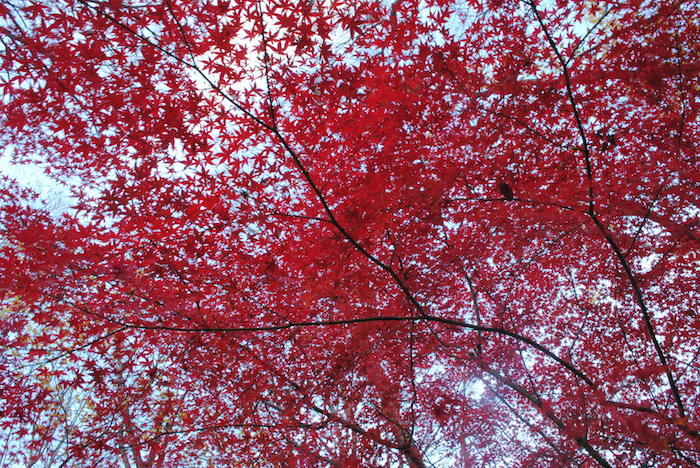 Musashino Park and Nogawa Park sit on opposite sides of a small road in the Mitaka-Chofu-Koganei area. Both have barbecue areas, and Nogawa offers a small playground on its far side. The parks are best known for maples, though the cherry trees in Musashino Park also put on quite a show—as do cosmos flowers earlier in the fall. Nearest station: Shin-Koganei

Koganei Park is located on the Koganei-Kodaira border, and is accessible from JR Higashi-Koganei or Musashi-Koganei stations, as well as the Seibu Shinjuku line’s Hana-Koganei station (roughly a 20-25-minute walk from each station; buses also available). Though it has lovely maples, it’s best known for its ginko trees. The park has several playgrounds, including a large, newly renovated one, and a barbecue area, making it a good location for a fall family outing. The on-site Open Air Architectural Museum (Edo-Tokyo Tatemono-en) has gorgeous Japanese maples that are highlighted by a special weekend of evening illumination, scheduled this year for November 22-24 from 4:30-8pm. Nearest station: Musashi-Koganei 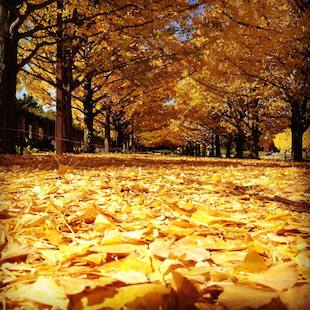 Showa Kinen Park sprawls sumptuously over Tokyo’s Tachikawa-Akishima area. Its most famous fall feature is an avenue of ginko trees accessible from the Tachikawa entrance, though there’s also a Japanese garden with beautiful Japanese maples closer to the Sunagawa gate. Check the map on the park’s website to find the best station for your desired destination—or you could find yourself in for a long haul. The park also boasts several brilliant play areas, one of which is barrier-free, so if you’ve got wee ones who care less about brilliantly colored foliage and more about, say, bouncing, Showa Park has something to keep them busy. Aim for mid-November to see leaves at their vibrant peak. 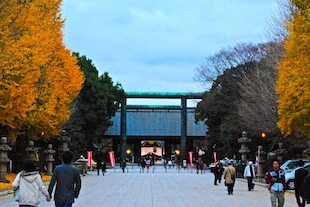 With Ueno, Shinjuku Gyoen, Yoyogi, Yasukuni Shrine and dozens more still on the list, Tokyo has far too many parks, gardens, shrines and temples to mention them all. Many are listed on the Tokyo Metropolitan Parks Association website and its Let’s Go To The Gardens page.

Park-hopping is a great way to explore the city on fall weekends. One word of warning, though: due to dengue’s first appearance in Japan in 70 years, some parks have been closed or partially closed, including Yoyogi Park and Shinjuku Gyoen. Keep abreast of the news before heading out. And while mosquito season is winding down, it wouldn’t hurt to have some bug spray on you.

If you’re up for more fresh air and exertion than Tokyo’s parks can offer, head out to one (or more) of the many hiking trails in the hills on the city’s western edge. Tokyo is surprisingly close to the wilds of Japan, and although weekends and national holidays will find a good portion of the municipal population out there with you, there are more than enough trails for everyone. 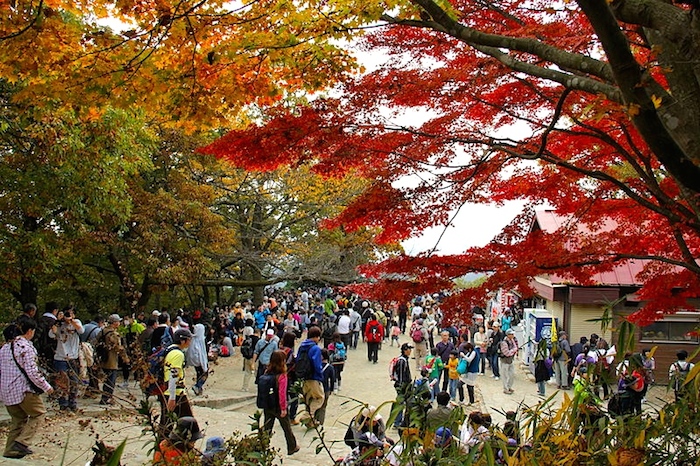 Takao-san on a Saturday—beautiful, but not for the faint of heart
(Photo via Wikimedia Commons)

Takao-san is easily the best-known (and most crowded) day-trip hike near Tokyo. While you can’t completely avoid the crowds, if you’d rather not walk with them, hop on either the chairlift or cable car for a quick ride partway up the mountain. Chase elusive solitude by continuing your hike to Jimba-san (four to seven hours), or head Osaka-way along the Tokai Nature Trail. Expect leaves at their loveliest mid-November, with maples in the spotlight at the Momiji Matsuri, which takes place from November 1-30 in Takaomachi. Nearest station: Takaosanguchi 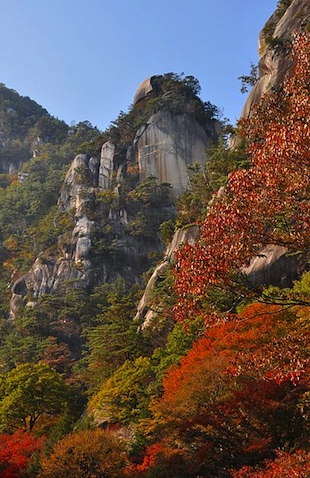 For more of a challenge, head out to the Okutama area, part of the Chichibu-Tama-Kai National Park. Just over an hour past Tachikawa down the Ome line, Mitake-san and Otake-san—two of the better-known peaks—are a good place to start. With the trail to Otake-san picking up near the peak of Mitake-san, they can be done together (ride the ropeway up Mitake-san to up the ease factor). Late October through November brings fawn-worthy foliage. Nearest stationn (for Mitake-san/Otake-san): Mitake

The especially eager should explore what else the Chichibu-Tama-Kai Park system has to offer. 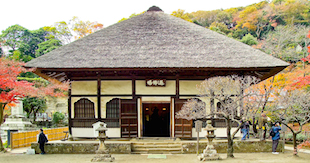 Those looking to leave the city behind, but not so keen on long treks, should ride the rails south to Kamakura. Temple- and shrine-hopping is easiest, but the area has a good network of short and easy hiking trails as well. As these often begin and end on temple and shrine grounds, you can easily combine hopping with hiking. Maple and ginko are the go-to trees. Nearest station: Kamakura or Kita-Kamakura

Sources: Kōen e Ikō, Walker Plus, and the Japan Travel and Tourism Association