Adults are doing a terrible job of combating climate change. And it’s not like they haven’t known about it. The United Nations International Panel on Climate Change (IPCC) was established back in 1988. The world’s first greenhouse gas emissions reduction treaty, the Kyoto Protocol, was adopted in 1997. And yet, 20 years after the protocol, the IPCC’s widely discussed 2018 report shows the world completely off track in terms of keeping global warming under control.

Younger generations are understandably upset at the prospect of having to live through a global ecological collapse they had no hand in creating. In 2018, then 15-year-old Swedish climate activist Greta Thunberg began protesting outside the Swedish parliament for measures to reduce Sweden’s carbon emissions. Her protest kicked of a global student movement known as “Fridays for Future.” Since then, students around the world have been skipping class to conduct marches and protests calling out governments for their insufficient action in preventing global warming.

The movement’s momentum has even reached Japan, where breaking rules to skip class and publicly challenge the authority of older generations requires considerable courage. Fridays for Future Tokyo held its first rally outside the National Diet on a Friday in February, its 20 or so student protesters outnumbered by reporters. But their third action on May 24, a march timed with demonstrations around the world, attracted as many as 300 participants according to media reports.

Hiroto Inoue, one of the founding members of Fridays for Future Tokyo and a second year student at Meiji University, explains that in Japan people often have negative stereotypes of protestors. “I invited my friends to join our actions, but without success. When people hear the word ‘demonstration,’ they think of something dangerous and scary.” Inoue notes that recent participants felt more comfortable about joining the demonstrations after seeing videos of marches in which everyone was smiling and having fun.

The movement attempts to change stereotypes associated with protests by showing that direct action can be fun and positive. Indeed, Inoue has been satisfied by journalists describing marchers “walking with smiles.” Nonetheless, he estimates that more than half of the participants in recent marches have been non-Japanese. Many Japanese participants have international backgrounds and therefore fewer negative preconceptions about demonstrations. High school participants, on the other hand, are few and far between.

“With a word like ‘strike,’ even if young people themselves want to go, their parents will not allow them to because they think it’s dangerous.” Looking forward, Fridays for Future Tokyo plans to host events that will be easier to attend for young students — something closer to a festival than a demonstration. “We want to create a society where anyone can feel at ease to say their opinions about environmental problems and take action,” Inoue says. 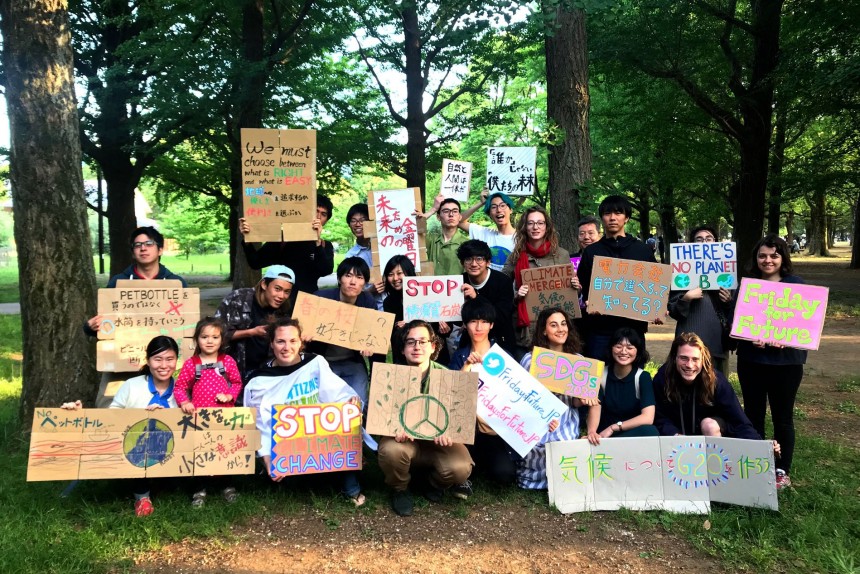 The organization’s next big move is a “global climate march,” set to take place on September 20. Rather than simply drawing attention to the problem, Inoue and his fellow members are working to establish more concrete goals and demands in the future. Following promising precedents in other countries, Inoue reckons that one strategy is to ask the Tokyo Metropolitan Government to declare a climate emergency. “If we could have Tokyo acknowledge that the situation is really critical, I think this could lead to further steps,” he says.

Visit Fridays for Future Tokyo’s Facebook page for more information about the group.