More than four years may have passed since the meltdown at Fukushima, but the effects are still being felt by those displaced by the disaster. Children have been especially impacted, and finding ways to help them step forward into a brighter future is a challenge. Fortunately there are men and women like Tetsuo Nakahara who are finding unique ways to foster healing.

Nakahara feels strongly about helping kids, and wants to do it in a way that allows him to share an experience that made a difference in his own life. While living in Hawaii, he was a dolphin swim guide for a company that gave people the chance to swim with wild dolphins. Ever since, he’s felt there’s something very special about the aquatic mammals. 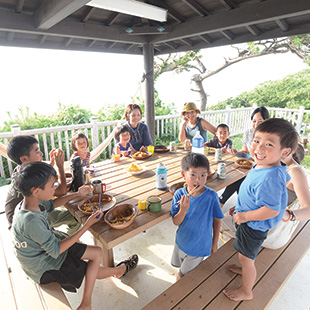 Kids mingling at the Dolphin Camp
(Photo by Tetsuo Nakahara)

“When you see the dolphin, they come just right by you. That encounter itself … it’s such an impact. You see dolphins coming by, and then you see them smile—I think that’s [a] pure encounter.”

It’s this kind of encounter that Nakahara wants to share with those struggling to find their identity and goals in the aftermath of March 11. So when his friend Toru Fujita called and proposed creating a dolphin camp, he didn’t hesitate.

The result is Fukushima Kids Dolphin Camp, a truly unique experience that’s now in its second year. Not only does it offer an opportunity for children to get back to nature, it also presents an inspiring challenge.

The camp takes place on Mikura Island, 200 kilometers south of Tokyo. Eight hours away by ferry, the waters around the island are home to more than 150 wild dolphins. Kids spend five days and four nights at the camp where they not only swim alongside their finned friends, but also enjoy hiking, drawing, yoga, and entirely organic food, donated by farmers from Kyushu, Kyoto, and elsewhere around Japan.

For the inaugural outing in 2014, Nakahara and Fukushima Kids Dolphin Camp welcomed 11 children and six parents. It was a huge success, and for Nakahara the greatest reward was seeing the kids embrace the challenge.

“Of course they encountered dolphins, but I was impressed with how they challenged themselves in the water,” he says. “They were jumping in the water, swimming with dolphins; and after they got back on the boat, if you see their face, you know that they overcame something. They are proud of something they’ve done.”

This year, interest has been extraordinary. More than 800 parents came to a support program meeting in Nihonmatsu, Fukushima, in June. Thirty kids signed up for the next trip to Mikura Island; but unfortunately, because of limited funds, only 13 will be able to go.

To help make the hard decisions, an essay contest was held to decide who would be chosen for this year’s camp. Many were heartbreaking, like one by a boy from Minamisōma, near the Fukushima Daiichi reactor, who was displaced to Chiba. Classmates at his new school teased him about being radioactive to the point of him asking his parents, “Do you think I should die?”

To help ensure that these children—and many more in the years to come—can take part in this therapeutic experience, the camp has turned to crowdfunding on Indiegogo. It’s an easy way for all of us to do our part in helping make sure the next generation has a bright future. The modest $8,000 goal, to be reached by July 31, will make a huge difference in these kids’ lives. As Nakahara reminds us, “This program we’re doing is to save the kids of Fukushima, but also to save the dolphins. I want to raise the awareness of how we can live with dolphins in harmony.”

To hear the full interview with Nakahara, tune into our new audio feed Metropolis One-on-One at: