Sparkling Swarovski-covered urn? Ashes inside of a floating balloon? Online virtual funeral with cartoony avatars? You might be frowning and thinking these are some awful jokes. But no, these are actual options people in Japan can choose for when they pass away. What? How? And Why? You are probably as confused as I was when I first heard all these products and services.

Japan is now the country with the largest population of elderly in the world. While its rapidly aging population has posed a series of challenges and threats for Japanese society as a whole, it has also brought some rare economic opportunities to some – the business of death.

Death (死) used to be a taboo in Japan. People tried their best to avoid using the word. Even today, they sometimes refuse to utter anything remotely “death-related,” for example, shi (the number four), just because the pronunciation is the same. 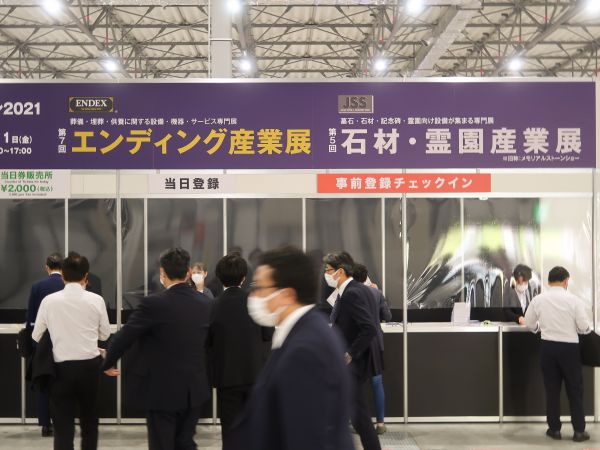 However, as the country becomes ‘grayer,’ death is no longer a forbidden word. The need for accommodation for the deceased is also skyrocketing and the popularization of the word shukatsu (preparing for the afterlife) is another result of such phenomena.

Though I am probably way too early for my shukatsu (a proud 20-something), I went to explore the 7th ENDEX Japan to see what my future holds. 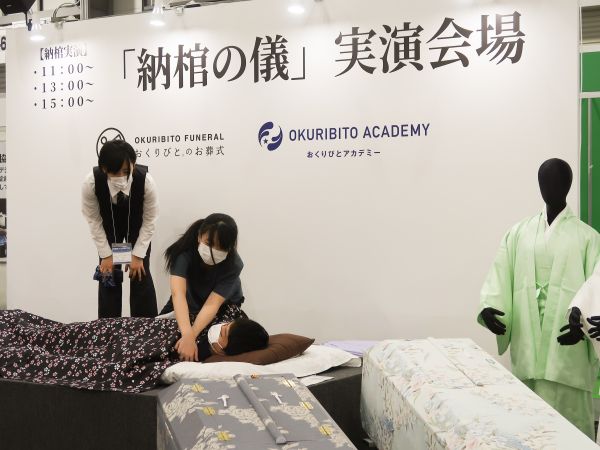 One of the first things I worry about is where my physical body will be located for my afterlife. According to JETRO’s report, in modern day Japan, virtually 100% of the deceased are cremated. However, a few hundred years ago the deceased were actually buried, as it was considered the more traditional way.

It wasn’t until the Meiji Era that Japan started to switch to cremation, due to the lack of burial space in populated urban areas. Which is probably the beginning of the cemetery buildings compacted with hundreds of urns. Some temples offer godobo (joint grave) where one is buried with many strangers under one big tomb. Another popular method is called jyumokusou (tree burial), as the name suggests, a heavy tombstone is replaced with an eco-friendly tree.

But are there any other places I can go?

To the infinite universe

Space travel is probably not news to you anymore as billionaire Richard Branson just launched himself into space as part of his space tourism plan. But what about funerals and burials in space?

Since rocket science isn’t that ‘rocket science’ to the public anymore, funeral service in space has been growing across the globe. Of course, Japan has its fair share too.

Ginga Stage (銀河ステージ) is a Japanese company that specializes in unorthodox funeral services. From space to ocean, they can take my ashes virtually anywhere I want. Allegedly holding the record of the most number of successful space funeral launches in Japan, Space Memorial (スペースメモリアル) is their flagship product.

Going to space is actually not as complicated as I thought. According to Ginga Stage I simply pay the fees, store the ashes in a special capsule and they launch the rocket in the U.S. so my remains would be in orbit before I (if I was still alive) would even know it. It’s also not just Earth’s orbit. How about a satellite? The moon? Or the deeper and infinite void of space? I have a range of options for my new home in space but I guess this also depends on my budget.

Here’s the price list and their actual launching video, just for your reference:

Pricing for different plans to go to space

These price tags may be out of your range. However, according to Japanese religion scholar Hiromi Shimada, a funeral in Japan typically costs about ¥2.31 million on average. So, ¥2.75 million for a funeral is just slightly above average by Japanese standards. Maybe I even have a chance.

The high cost of funerals and ceremonies has also been a huge concern for modern-day Japanese people, due to the massive scale of traditional Japanese ceremonies. Traditionally, people would invite their entire family, including distant relatives, friends and even people living in the same neighborhood but whom they haven’t talked to in ages.

However, as more and more households in Japan become nuclear families and, as Shimada Shinya pointed out in his journal, funerals are becoming more individualized or even isolated — hence the necessity of such huge funerals becoming a thing of the past. As a result, people are seeking cheaper and less complicated options for their afterlives.

To space (almost), but in a balloon

One of the creative, low-cost solutions funeral industry pros came up with is the “Balloon Memorial (バルーン宇宙葬)”. It only costs ¥240,000 for the most basic package. For this eco and budget friendly option, cremated remains are ground into powder (less than 1 mm grains) and put into a balloon with a diameter of 2 to 2.5 meters. The balloon is then filled with hydrogen gas and is released on the spot after the family has finished their silent prayer or goodbyes. In about two hours, the minimalist spacecraft will reach an altitude of 30 to 35 kilometers. As the air pressure decreases and the balloon expands, the balloon eventually pops and now the whole world is my urn. 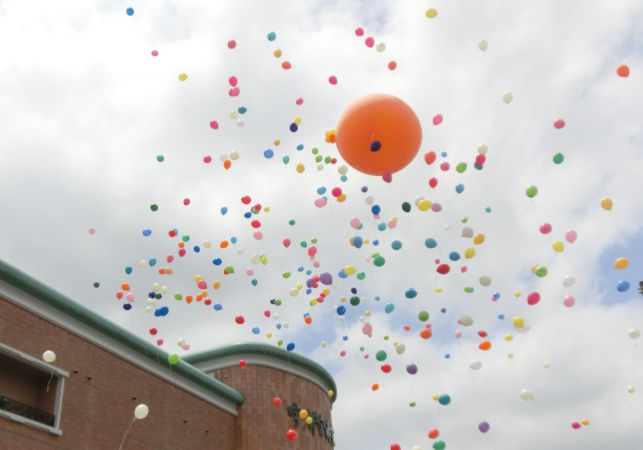 To the world of “the Wind Spirit”

At first glance, this animation-major-fine-arts-thesis-looking project might be a bit deceiving. Yet, this is an actual funeral service, but online. According to the service provider, if the past decades of materialism can be summarized as the age of “soil,” then 2021, would be the beginning of the age of “wind,” where the invisible spirit should be valued.

Indeed, as the 2016 questionnaire issued by the metropolitan government, 34.6% participants stated that they don’t think they would want a tomb in the future. I belong to the 29.1% who are not sure.

The online cemetery Kazenorei is established in response to such “spirits.” In this virtual online world, my family and friends can pray for me with their avatars. The photos, voice-notes, films and music I love and all other memories can be stored digitally so the living ones can retrieve them 24/7. My friends can also host online birthday parties for me. 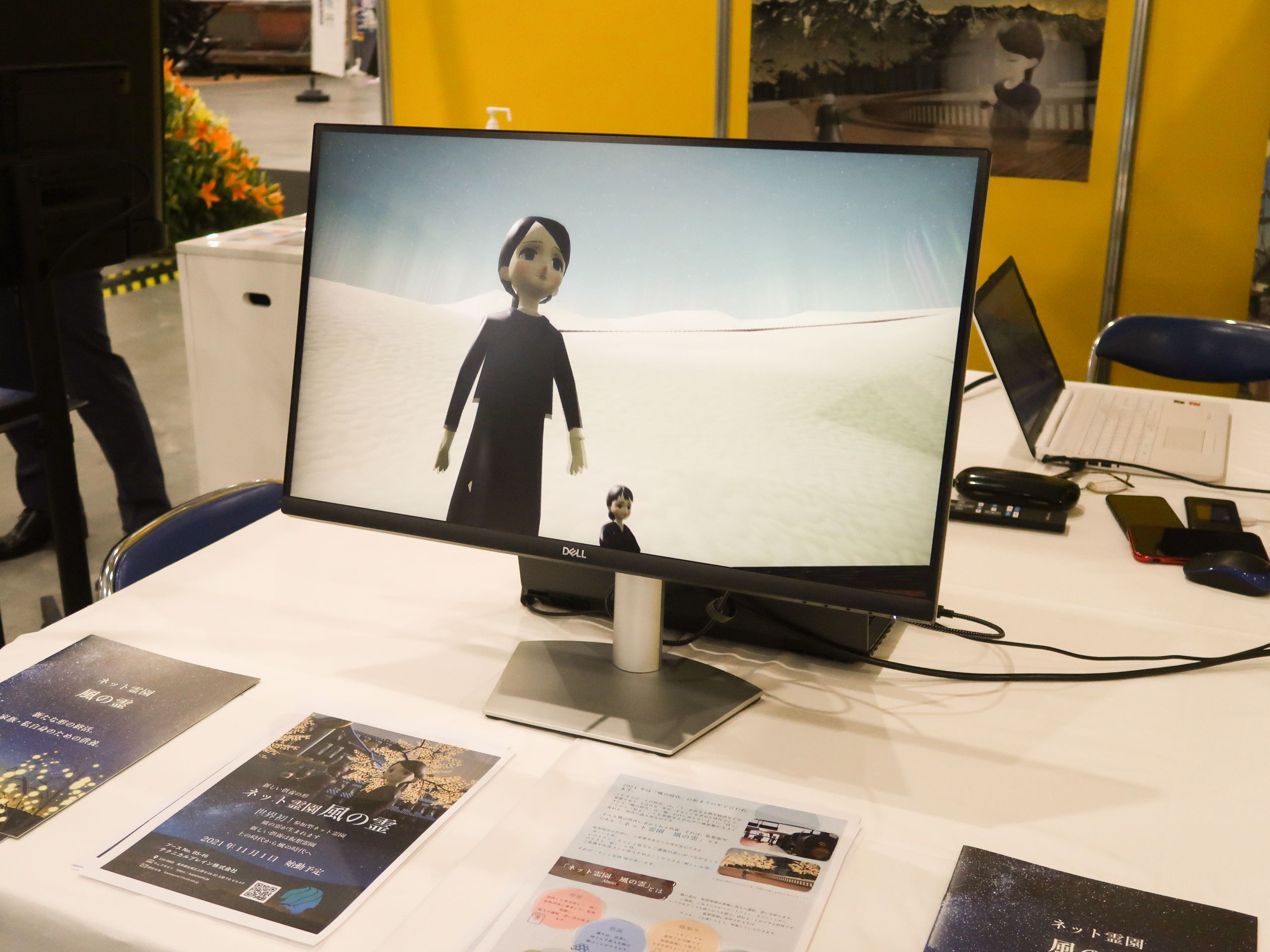 Though this online service seems to be a bit too ahead of time for now, this could be a more appealing option for the proceeding generation born with the internet, like me.

To the funeral van

The COVID-19 pandemic has also affected the funeral and cemetery industry over the past year. One of the solutions to lower chances of infection was to scale down the size of ceremonies to the size of a van or a truck. At the expo, it essentially comes down to two options: inside or outside of the vehicle.

For the more traditional version, a larger specialized truck can hold up to 23 people inside of the cargo so families can attend “indoors.” According to the manufacturer, this is designed for those areas lacking proper ceremony halls or means of long-distance transportation. 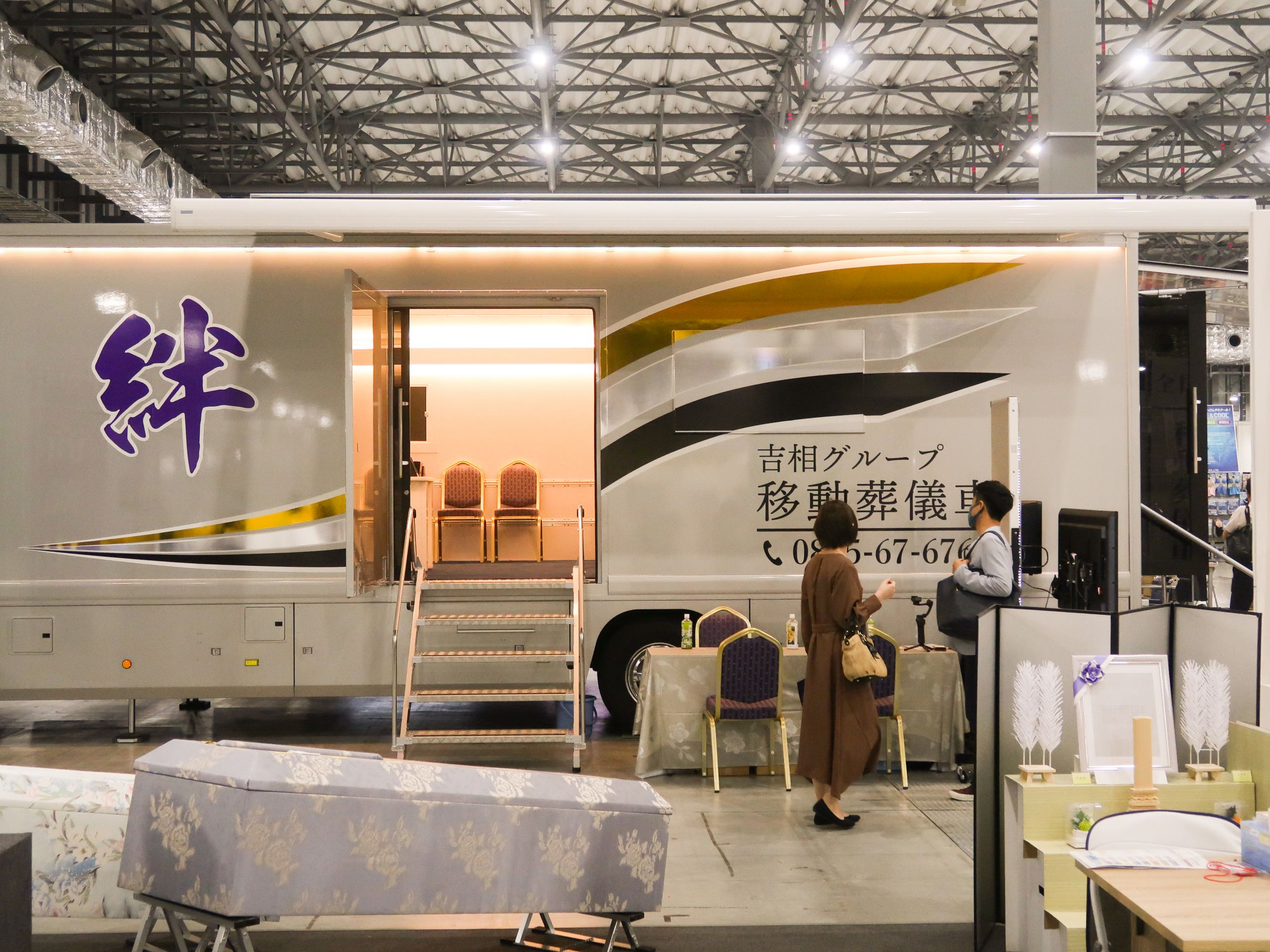 This specialized truck can accommodate up to 23 funeral guests

Maybe you have noticed, the scale of each type of ceremony is gradually decreasing. So, what is the ultimate form of minimalism funerals?

Yes, there is a type of “burial” literally called 0 Memorial (ゼロ葬) in Japanese. 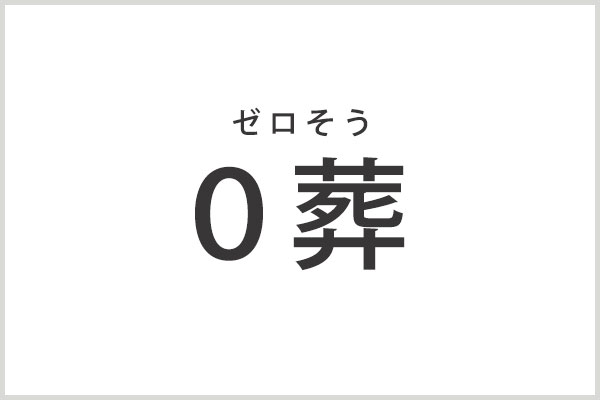 Usually, when the deceased are cremated, the ashes are collected by the family. In eastern Japan, people collect all the remains while in western Japan, some only collect one third or even just a quarter of the ashes.

But 0 means 0. After cremation with o Memorial, the ashes are left in the hands of the crematorium. No remains also means that there is no need to build a tomb either. Sounds a bit sabishii (lonely), but I was born with empty hands, so it also makes sense if I leave nothing behind as well.

Bonus: some fun gadgets for the afterlife

Why do we die? What do we do after we die? Do we go anywhere? The topic of death can sometimes become very philosophical. Before having another round of existential crisis, let’s take a look at some of the cool products for some individualistic afterlife plans.

Yes, you read it right. This urn is handmade with Swarovski crystals. To be honest, when I saw these ones shining under the light, for a second I did wish I could sleep in one of them after I passed away. And I guess you probably are asking the same question as I did to the stall staff: Who is actually buying these?

The young lady told me that even though this urn is designed for all age groups, because it does cost a fortune to make, most of their clients are still the older and wealthier ones.

And yeah, that’s definitely not me. 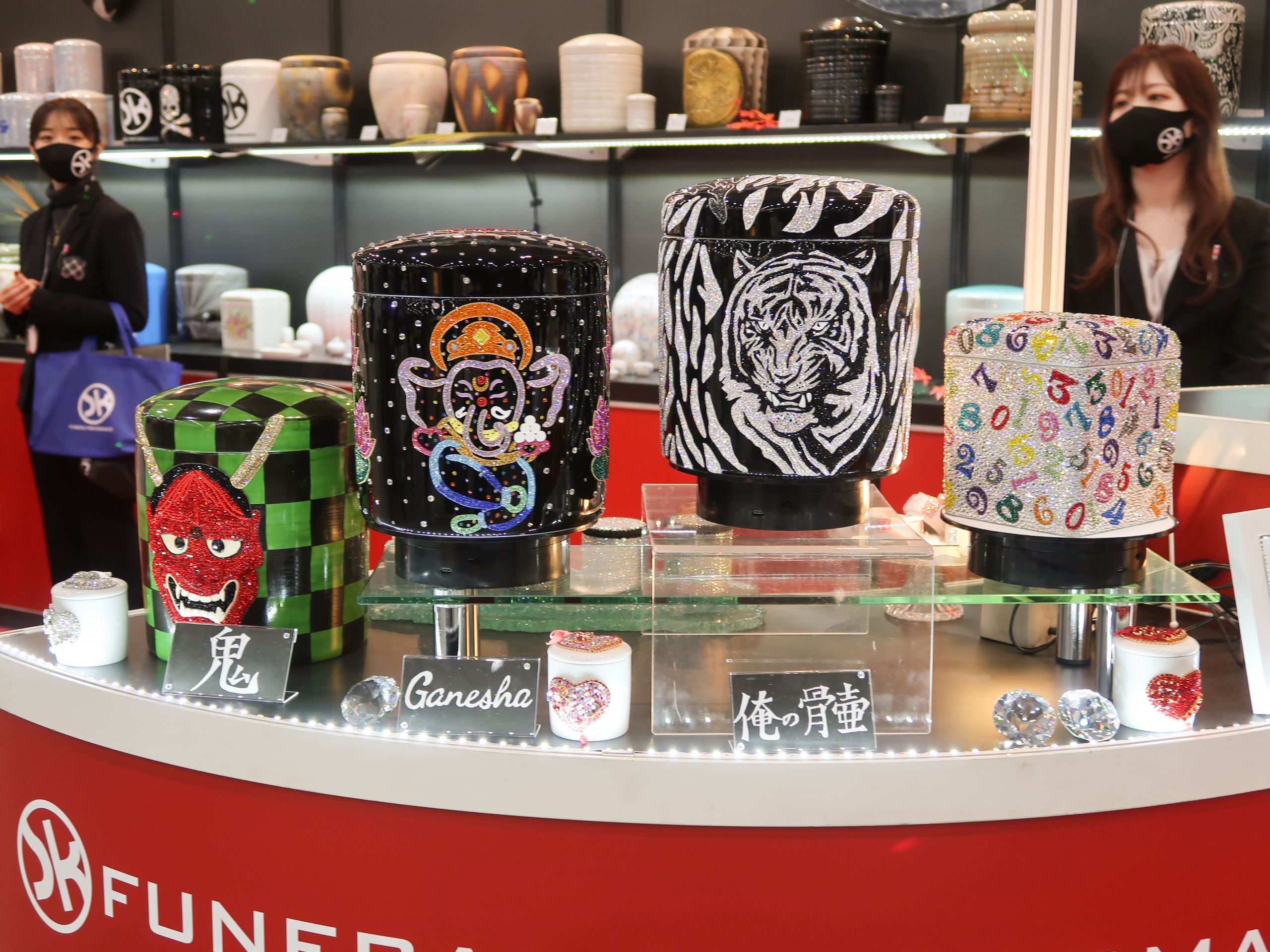 If you ask me what would I miss from the living world if I was transported to the afterlife, food would probably be on my list. But guess what, I don’t have to worry about that anymore because look at these vivid, realistic, delicious-looking candles! This definitely is going on my afterlife gift list. 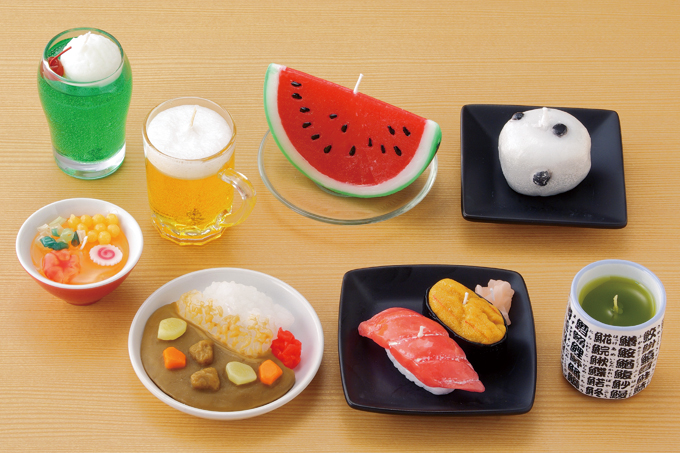 One drawback of these candles is that they can’t replicate the actual smell of each food or drink. But I’ll be happy so long as I can get these milk candy incense. 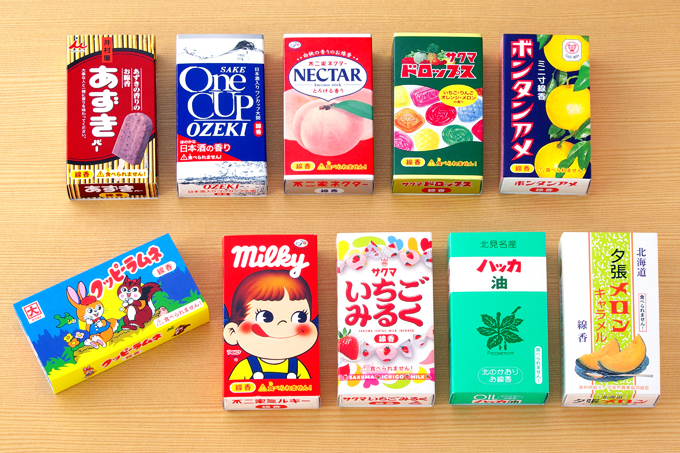 Of course, I still would love to live for as long as possible, but ENDEX Japan indeed showed me that the afterlife is not as boring or gloomy as I thought it would be. Thanks to the creativity, technology and all the advancements we have in today’s civilization, it’s not just ashes, flames and urns on a compacted shelf waiting for me, I guess.