A stroll through a spectacular Tokyo sewer

Buried below Tokyo’s surface, amid a tangle of rivers, lies a very successful and colossal feat of engineering.

G-Cans, as it’s commonly known, is considered the world’s largest underground flood diversion facility. Its official name is the “Metropolitan Area Outer Underground Discharge Channel,”—or, less of a mouthful in Japanese, “Sairyu no Kawa”—and its function and technicalities are … well, rather complicated. Nevertheless, whether you’re an architecture aficionado, video game visionary, or simply someone who enjoys going toe-to-toe with Mother Nature, it’s hard not to be delighted by the visual spectacle of G-Cans. And although most of the channel remains inaccessible, a tour into the belly of this massive system—the cistern—reveals a picturesque, cathedral-like womb of a structure that’s more than worth the price of admission. 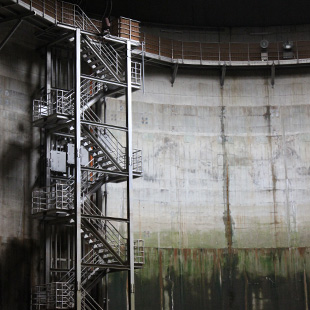 Completed in 2006, G-Cans maintains water levels in the Naka River drainage basin, an area of northern Tokyo, which is prone to frequent and destructive flooding. This basin, with its bowl-like topography, is surrounded by powerful rivers including the Tone, Edo, and Ara, which often inundate the surrounding area.

As urbanization in this area began approaching 50 percent, thus making it even more susceptible, G-Cans was built as a hopeful solution to improve flood control and restore water-retainment functions. And restorative it has been. Through 2014, it successfully adjusted floods and reduced devastation 85 times. To illustrate, in August 2008, when the highest ever inflow was recorded, G-Cans displaced 11.72 million cubic meters of flood water that otherwise would have affected the local community.

In order to function, G-Cans is comprised of a well-oiled system of parts. Five banks, each large enough to accommodate a space shuttle, dot the area, taking in flood water from the aforementioned rivers. They are all interconnected by a 6.3-kilometer tunnel built 50 meters below ground. The tunnel itself, with help from 76 pumps, has the capability to drain flood waters at a speed of up to 200 cubic meters per second—equivalent to a full 25-meter swimming pool. Finally, a water cistern reduces the overflow and drains it smoothly into the Edo River. It’s this cistern, with its 59 stabilizing pillars, all towering 18 meters high and weighing an unfathomable 500 tons, that visitors can gawk at, as included on the tour, available when the facility is not performing its critical function. 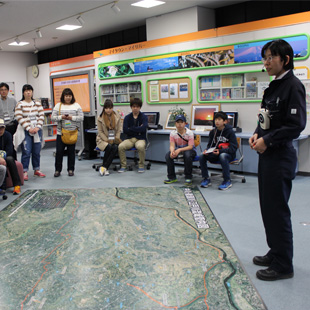 While the one-hour tour, from orientation to underground submersion, is conducted entirely in Japanese, you can request a rather informative multi-page English booklet, which includes much of the same information presented. The first half of the tour takes place in the meeting room, as the guide offers explanations about the floor map and demonstrates how the system works using a model. After a short video and group stretch—120 or so steps comically justifies this—it’s then time to descend. The entrance, a concrete bunker-like shed, is a short walk across an unassuming soccer field. You then head down, single-file, passing sign after sign warning not to take pictures. The smell, reminiscent of a basement, soon becomes irrelevant once you reach the bottom.

Once down, you are immediately dwarfed. The cistern, with its shadowy and menacing pillars, silently envelops you just like a character in some some abandoned world of Final Fantasy. Puddles of water splatter the floor, creating eerie reflections. A drop off at one end of the vault-like room appears to sink into the recesses of hell. Though the tour guide launches into another lecture upon entering the cistern, it can be difficult to concentrate. 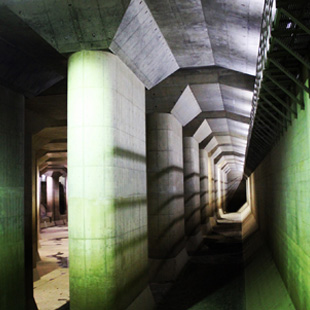 Eventually, you have time to wander, albeit only 10 minutes and in a very regulated area that’s sectioned off by rope. Nevertheless, it’s still a worthwhile segment of time with plenty of spectacular photographic potential. Bring along a tripod to combat the low lighting. (Or maybe even a costume for an impromptu modeling session.)

All in all, G-Cans makes for an interesting day trip from Tokyo, if only to marvel at a world few venture down to see.