The healing waters of Nisshinkan

Relax and refresh in Gunma

Nestled on the Gunma side of Jōshin’etsu-kōgen National Park lies one of the oldest and most highly-rated onsen, or hot springs, in Japan. At 1,800 meters high, Manza Onsen Hotel Nisshinkan also holds the record for the “highest-placed” onsen in Japan. Its owner, singer-songwriter Ken Izumi, often jokes that it’s “God’s favorite onsen,” because it’s “the closest to heaven.” 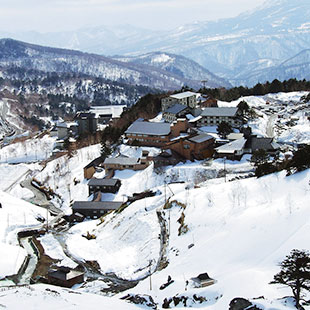 The resort from a distance
(Photo courtesy of Nisshinkan)

Opened in 1973, it originally consisted of one wooden building built along a stream. With increased prosperity and an influx of customers, three new wings were gradually built, higher and higher up the valley. Bidding farewell to its antiquated first wing in 2007, Nisshinkan now offers customers three levels of accommodation from which to choose, organized vertically from vintage to modern.

Breakfast and dinner are both served buffet-style in the hotel’s main dining room and are included in the price of your stay. Breakfast features offerings such as produce harvested daily at local farms and Japanese staples such as miso soup and rice as well as Western favorites such as yogurt, croissants and cereal. Dinner options, on any given night, may include casseroles, Chinese dishes, noodles, sushi as well as a dessert bar that includes six flavors of ice cream. For lunch, hotel guests may purchase meals from the hotel’s café, or buy a ticket for the all-you-can-eat lunch in the main dining room, where options are most often curry, udon and chukadon.

Bath with a view
(Photo courtesy of Nisshinkan)

In terms of baths, Nisshinkan stays true to its antique roots, using only Japanese cypress wood in the construction of its onsen rooms as well as the baths themselves. Guests may enjoy six types of hot springs in nine baths spread out over four different locations on the hotel premises. Surrounded by snowbanks in the wintertime, Gokuraku no Yu, an outdoor (or “rotemburo”) bath perched on a hilltop, offers striking views of the surrounding valley during the day as well as exquisite star-viewing at night. Chouju no Yu, the main onsen room, features four different indoor baths as well as two rotemburo. Manten no Yu consists of one bath with views of a local forest, and Enman no Yu is a private hot spring room, which may be rented for ¥2,000 per hour. All of the hotel’s onsen locations—except Gokuraku no Yu—also offer showering facilities.

The hotel rooms themselves range from simple tatami rooms with futons on the floor for sleeping to luxurious suites that include two beds, two sofas, a bar, en-suite toilet and a private bathing room. Pricing ranges from ¥6,630 per person for a basic room to ¥30,120 per person for a deluxe suite. 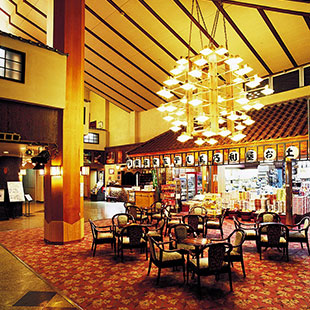 Seeking entertainment between your feasting and bathing? Options abound. Seven different levels of hiking trails spring from the hotel’s entrance, from a quiet boardwalk stroll around a scenic pond to a three-hour trek to the nearest volcano, Shiranesan. In the winter, hotel guests may also ski at slopes within walking distance. The entertainment feature on which Nisshinkan prides itself the most, however, is its floor show. At 8pm nightly, hotel guests may enjoy a free, hour-long performance by the artist du jour. Past performers have included world-class Hawaiian musicians, jazz artists and dance troupes. The mainstay is, of course, hotel owner Ken Izumi, whose idea it was to start the show. “Despite the fact that I was only playing the guitar casually in the hotel café, customers would listen very attentively and encouraged me to perform on a nightly basis,” states Mr. Izumi. “Then, some of my professional musician friends asked if they could play here in exchange for accommodation. This lead to my deciding that we should set up a nightly show, with a rotating cast of performers.”

“Being a family-run business,” muses his son, executive manager Kazumasa Kuroiwa, “I believe that we are more capable of responding to each customer’s desires than your average hotel is.”

Fluent in English, Mr. Kuroiwa looks forward to helping foreign visitors make reservations, and can be reached at 0279-97-3131. www.manza.co.jp/eng/

There are plenty of reasons why Japan is consistently mentioned as a bucket-list travel destination. Delicious food, onsen, convenience and Japanese hospitality are just a handful that naturally spring to mind, but there’s one other thing that has been bringing…