How to Build an Idol

“How’s it going? I’ve been checking out your tracks on Soundcloud and they’re rad,” wrote Ricky Wilson. The email was for Dan Terminus, an ear-pummelling darkwave songwriter.

“I’m starting an underground Japanese idol unit. I’d be producing a group of girls who sing and dance along with backing tracks. The theme would be horror with extreme metal. Would you be interested in writing a song?”

Next, he messaged Al-Kamar, a post-Black Metal musician, who he discovered while scouting for talent on the racks of a Shinjuku record store. The selection process was simple. Were they good? Were they active? Would they respond to an email?

Wilson was in luck. Despite his getting “really bad responses from the darkwave guys,” Terminus and Al-Kamar agreed to help out. It was early 2014. By November, the result would be a single, ‘Kholat Syakhl/Azatoth.’ The group’s name, Necronomidol. 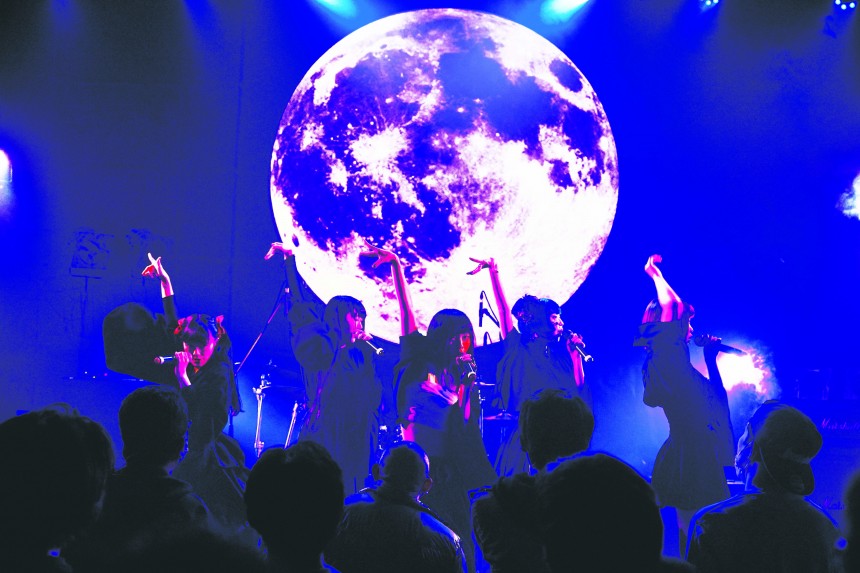 While recollecting this, Wilson sets up his camera to record the show, which will start in fifteen minutes. Necronomidol are the second headliners on a bill of six at the Chelsea Hotel in Shibuya, a multiplex of live venues that also includes a falafel kiosk. It’s their fifth show this week. The near-nightly performances are a necessity, Martin explains while leading me inside, “otherwise fans get bored.”

The ticket girl is wearing a blue vinyl nurse uniform with a Playstation joystick protruding from her head. The group onstage don luminous nightgowns, playing what sounds like a VHS home-workout cover of the White Stripes. Two women wander about in Mickey Mouse hats made from party balloons. The audience is in their twenties — not the stereotypical old men one expects. They are crowd surfers and mild slam dancers. One guy is slid onto the stage, lying supine there a while. He looks like he wants to peer up skirts, but he actually just wants to flip the group off.

Wilson fell into this world by total accident. Fifteen years ago, after finishing his studies in Pittsburgh, Pennsylvania, he moved to Japan. An avid punk and metal fan, in Tokyo he gravitated towards the thrashcore scene. “Then I got married and stopped going to shows.” He took a job in advertising and event management, and it was while organizing a Japanese festival in Malaysia that an idea emerged.

“My superior wanted a big idol group like AKB48 to play, but there wasn’t money for them. So we saw if we could get another group instead. I didn’t know anything about idols but then Momoiro Clover Z broke. Suddenly, there was this huge movement.”

While on this business hunt, he encountered idol group Bellring Girls Heart. “They did 1960s psychedelic music, like 13th Floor Elevators. I noticed one guy was running everything. That got the wheels turning. You could actually just make an idol group.”

Of course, the DIY music ethos is easier to execute in the realm of punk or metal. For an independent idol unit, a band is not formed after learning only three chords. “If we wanted members, we needed a decent webpage, songs and an image.”

He had the songs by March and then put out a call for members. About thirty appeared, and four were chosen: Kakizaki, Himari, Sari and Tachibana. The former three remain active, with two new girls being drafted in recently, Hina and Rei. 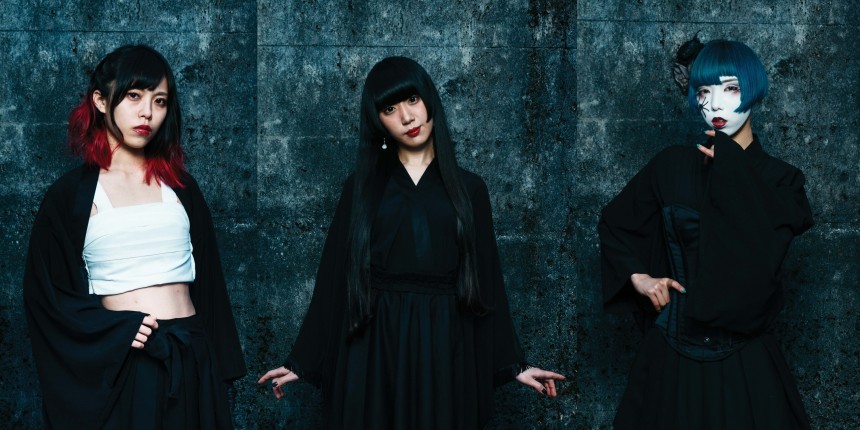 Kakizaki came from another group, which broke up six months prior. “They were brighter, but there was a gap between the members when we weren’t onstage. Also the fans didn’t really care about music,” she recounts. In the post-split months, “life had just become: wake up, go to work, go to bed. I had no purpose. Then I heard about this.”

We’re in a sweltering recording studio five minutes from the venue where she sits, remembering this. The five are already in costume, though Sari stands out in particular, since her face is painted white, her hair is green, she wears body and neck corsets, and there’s a spider glued to her cheek. Previously she wore fake leather. “It literally cooked her onstage” Wilson notes. “She found it hard to breathe, so we had someone come in to design breathable fabrics.”

Her background was in the fashion subculture of shironuri (face painted white). Like Wilson, idolatry was never her intended path.

“I listened to avant garde composers, but I was doing shironuri since high school. This was just a suitable outlet for that fashion.”

And when did the spider appear? 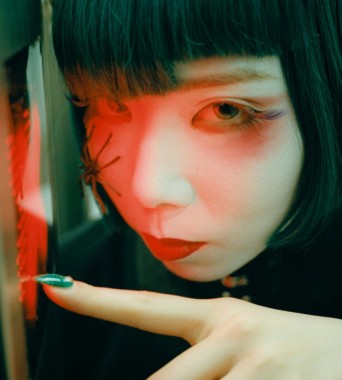 “One day he was just there.”

It’s a throwaway joke, but it’s also a detail indicative of the culture. To be an idol is to be a perfect, otherworldly illusion, so the spider is spoken of as a real bug. “This is not who I am on the street,” she adds, but in costume, she gets to define the reality. It is why independent idols are so appealing. A crowd can witness normal people transcending real life from meters away, transforming into perfect beings that walk among us. It’s like Batman. Anybody can put on the mask and be the Batman. In fact, Hina, the youngest member, managed to finish high school without ever letting on to her classmates that she was performing as an idol most evenings.

As this is being explained, Himari has attempted to cool herself down by holding a bottle of water between her chin and neck. It falls into her costume. She didn’t want this to be seen, otherwise she wouldn’t be using her knees to fish it out. It is a refreshing image, because despite the hypnotic effect of the illusion, seeing the human mistakes is an equally riveting part of the independent scene.

Onstage it is the same. As their set kicks off with a foreboding disco number, they prance like marionettes, but you can see the sweat and sheer force of energy being spent. It’s why the idea of punk is not actually an absurd parallel to draw. By bringing the performance down to a crowd’s eye level, it validates the culture as an artform by showing the sincerity of their efforts.

They may dance like puppets on strings but they are not passive vessels being played by a faceless producer. It is a cottage industry run by the six of them. They press their own albums and design their own t-shirts and merchandise. Both Kakizaki and Sari are integral to the overall presentation, down to the polishing of Wilson’s lyrics and press releases, while also handling the mail service that caters to the growing international fanbase prioritized by Wilson, what with him being one of the few Americans in the trade.

“Domestically, I’m disadvantaged,” Wilson says, but goes on to explain that the obstacle provided an incentive to broaden their horizon, having social network pages in both English and Japanese, which has enabled them to gig in Australia, Thailand and Taiwan. Europe is the next major target.

“It’s not extremely profitable but I’m getting to do this professionally now.” With this he disappears to convenience store to do an errand for the members.

It’s after ten o’clock and they are about to spend the next hour doing merchandise. The process of merging music and necrolatry seems draining, but Wilson appears chipper, willing to miss a few nights of sleep in exchange for doing everything on his own terms. 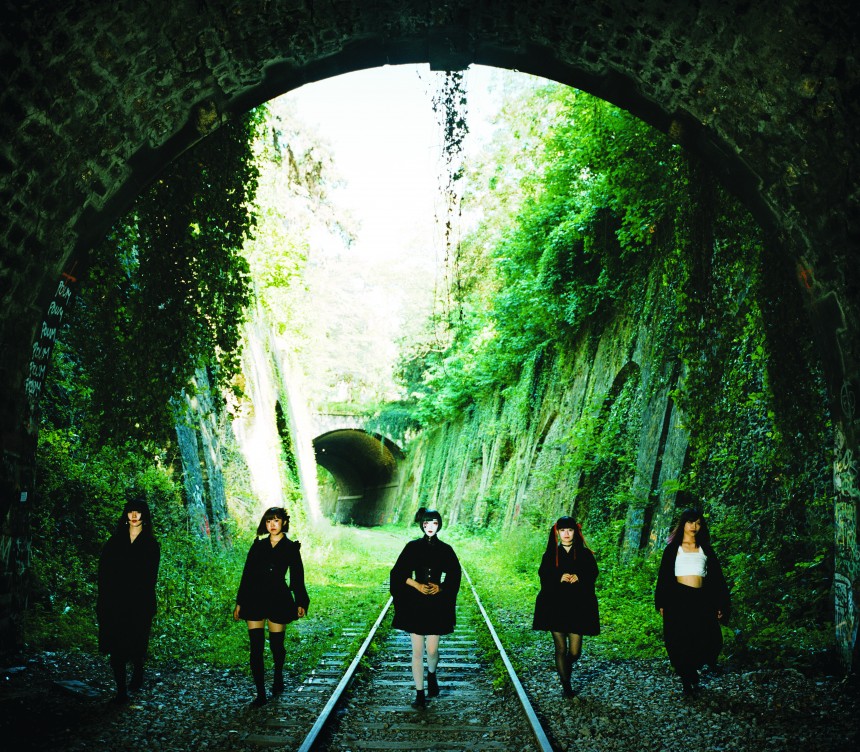 Note: In the print version of this article member “Himari” was identified as “Henmi” (a name given during the interview). We’ve updated her name as “Himari” to be consistent with how she is identified on the idol group website.