Get your next gardening fix in air-conditioned comfort with a visit to the little known but eminently worthy Toguri Museum of Art, a hidden delight tucked away in the Shoto neighborhood near Shibuya Station in Tokyo. The museum, which specializes in Asian porcelain, is currently showcasing the many flower and plant designs seen in Imari ware, arguably the best loved and most collectible type of Japanese antique porcelain. This is the first time the museum has offered a botanically-themed exhibition and it’s a winner.

Whatever your favorite flowers may be, whether irises or orchids or peonies, there are plenty of pretty blooms here to ooh-and-ah over. But in Japanese art, a flower is never just a flower: every botanical design is a potent symbol of a specific season, laden with poetic associations. What’s more, nearly every botanical motif carries an extra auspicious meaning. Designs incorporating fruits and vegetables with many seeds, for example — think gourds and pomegranates — convey a wish for many offspring and a long family line. Learning the meanings behind motifs will do more than deepen your appreciation; life in Japan becomes a lot more fun when you can decode the hidden messages in commonly used symbols. 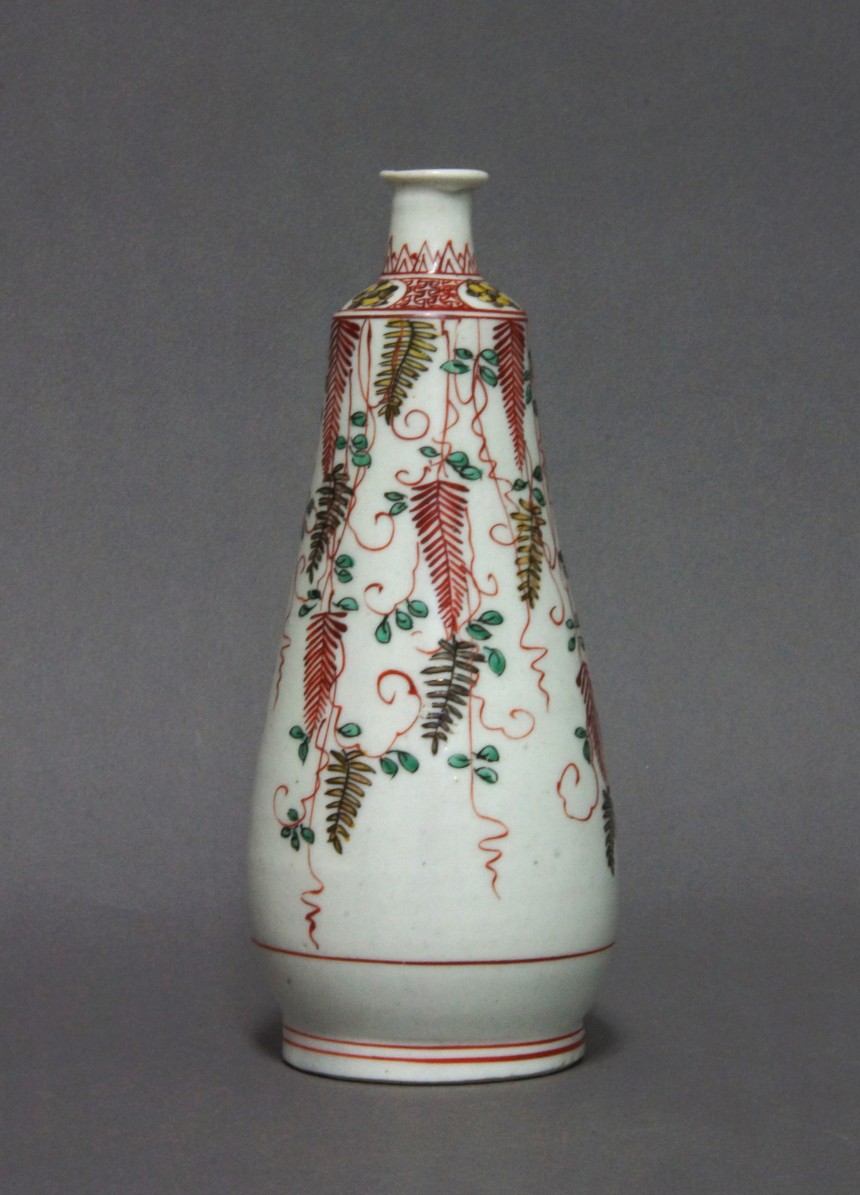 Bottle shaped to resemble a tea whisk and lavishly decorated in gold and overglaze enamels with a design of trailing wisteria vines. Imari ware, second half of the 17 th century. Toguri Museum of Art.

Ever since ancient times, it has been the custom in Japan to mark even the smallest changes in season by appreciating the plants and flowers then in bloom. Celebrations of the changing natural world are seen in Japanese art, poetry and of course meals, and the dishes used at banquets often incorporated botanical motifs that were highly specific to the season. Many of these plant and flower designs also carried auspicious meanings, some of which were borrowed from China. An example is the trio of pine, bamboo and plum, which came to Japan as an established symbol of perseverance in the face of adversity. Likewise, the peony symbolized prosperity and distinction, while the chrysanthemum carried a wish for long life. Other motifs are uniquely Japanese, such as the daikon radish, which was considered lucky because daikon sounds like daikoku, meaning “great riches.” Such word play is often at work in traditional Japanese designs.

The advent of Imari ware in the early 17th century, as Japan’s first domestically produced porcelain, coincided with a growing interest in the cultivation of plants and flowers. The culture of flower appreciation began among the nobility and gradually spread to all levels of society, and a great many gardening books and manuals were published. Woodblock printers even sold inexpensive sheets, modeled after the banzuke rankings of sumo wrestlers, that ranked chrysanthemum blooms for their rareness and beauty. In 1828, the first Japanese botanical compendium was published. Titled Honzo Zufu (Iconographia Plantarum, or “Diagrams and Chronicles of Botany”), it was written by Iwasaki Kan’en and richly illustrated in full color. The present exhibition is organized around this famous first botanical encyclopedia, and reproductions of pages from the book are included in the display to provide context about the interest in plants and flowers at around the time the works were made. 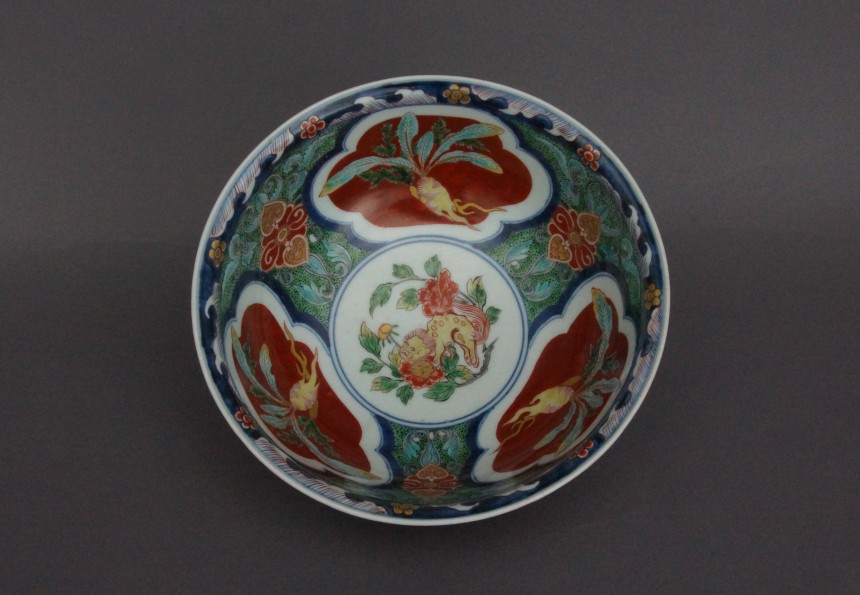 This bowl bears a felicitous design of daikon radishes around a mythical Chinese lion-dog amid peonies. Imari ware, first half of the 18th century. Toguri Museum of Art.

What is striking in this show is the huge variety of botanical motifs used in Imari ware. There are plenty of cherry and plum blossoms, to be sure, but you’ll also see depictions of lesser known plants such as the golden lace (Patrinia scabiosifolia), a humble summer flower that grows easily in sunny areas. Even myoga, the edible flower buds of a type of ginger plant, makes an appearance: the little curved buds, probably most familiar to you as the fragrant pile of pink shredded vegetable served atop cold tofu in the summer, are artfully captured in a set of small and finely crafted blue-and-white dishes. Myoga is considered an auspicious plant because a word meaning “divine protection” has the same pronunciation.

The exhibition offers approximately 80 very fine examples of Imari, ranging in date from the early 17th century to the 19th century. There are dishes and bowls, large and small, as well as bottles, cups and a charming celadon incense burner that shouldn’t be missed. It’s shaped like a melon — you can probably guess why that, too, is an auspicious symbol. 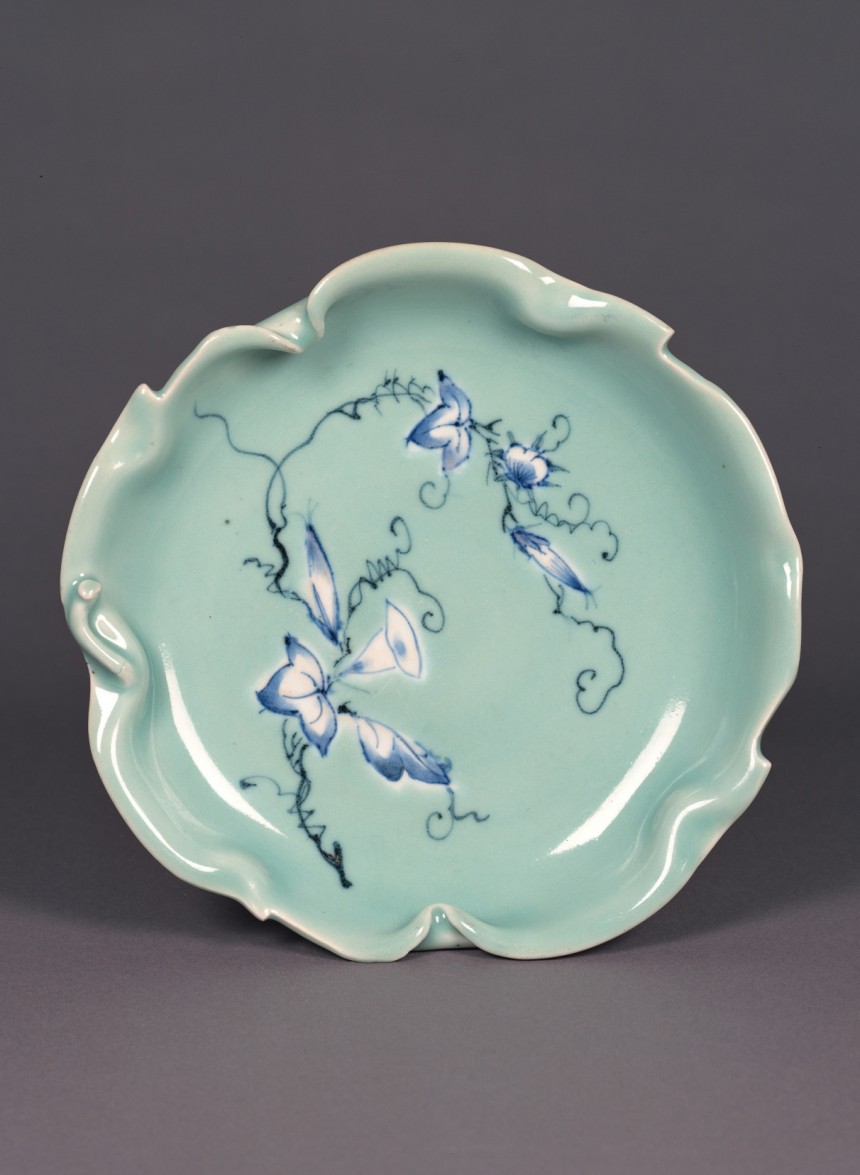 Celadon dish decorated with morning glories. The rim was curled to give it the natural contours of a leaf. Imari ware, second half of the 17th century. Toguri Museum of Art.

The Toguri Museum of Art emphasizes education as a way to satisfy both informed connoisseurs and visitors who may arrive knowing nothing at all about Japanese porcelain. In recent years, the museum has been making a special effort to better serve foreign visitors, so all works are labeled with basic identification in English. In addition, about half of the extended captions have also been translated, providing more in-depth information. This makes this exhibition a welcome opportunity for anyone — including those who don’t read Japanese — to learn more about Japan while indulging their passion for plants and flowers.

Win free tickets to the exhibition! Apply online at metropolisjapan.com/imari-lottery. Winners will be selected by lottery and tickets mailed out on August 6, 2018. 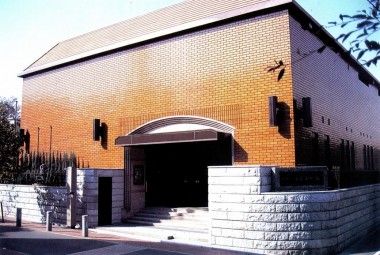 Remember this building: the sign outside is only in Japanese.

Hours: 10am – 5pm daily, Fridays until 8pm. Last admission 30 minutes before closing. Closed Mondays, unless a national holiday, in which case the museum will be closed the following day instead. Also open the 4th Monday of the month when conversation in the galleries is encouraged. Brings kids or friends and chat away with no fear of disturbing others. Closed for changes of exhibitions and at the end of the year and the beginning of the new year for the New Year’s holidays. Check the calendar on the top page of the museum’s Japanese-language website before visiting.

The author of this article has organized a special event in English at the museum on Monday Sept 10 from 10am – 11:30am, including a fully guided tour of the exhibition. Details and sign-ups at alicegordenker.wordpress.com