“Japan is slow to change,” the aphorism that seemingly can be used to hush any progressive voice, including the call for marriage equality. In 2015, Shibuya Ward introduced marriage status certificates for same-sex couples, and the example has been followed in other locations across Japan such as Setagaya, Sapporo, Fukuoka and Osaka. However, this form of same-sex partnership is not legally binding and does not grant the couple rights such as custody of children, tax breaks or inheritance rights.

There’s been something in the air these past months, signs that people in Japan are getting impatient with the pace of change. Ten same-sex couples will file a lawsuit against the Japanese government in February for not recognizing their marriages. A Japanese lesbian couple are making headlines by traveling around the world, staging wedding photos in countries where same sex marriage is legal in an attempt to raise awareness back home. Frustrated by slow moving attitudes and imperfect legislation, the LGBTQ community are taking matters into their own hands.

LGBTQ people exist in Japan, living and loving, whether same-sex marriage is recognized or not. Metropolis spoke to three LGBTQ couples and one professional activist in Tokyo about their thoughts on love, marriage and equality in 2019. 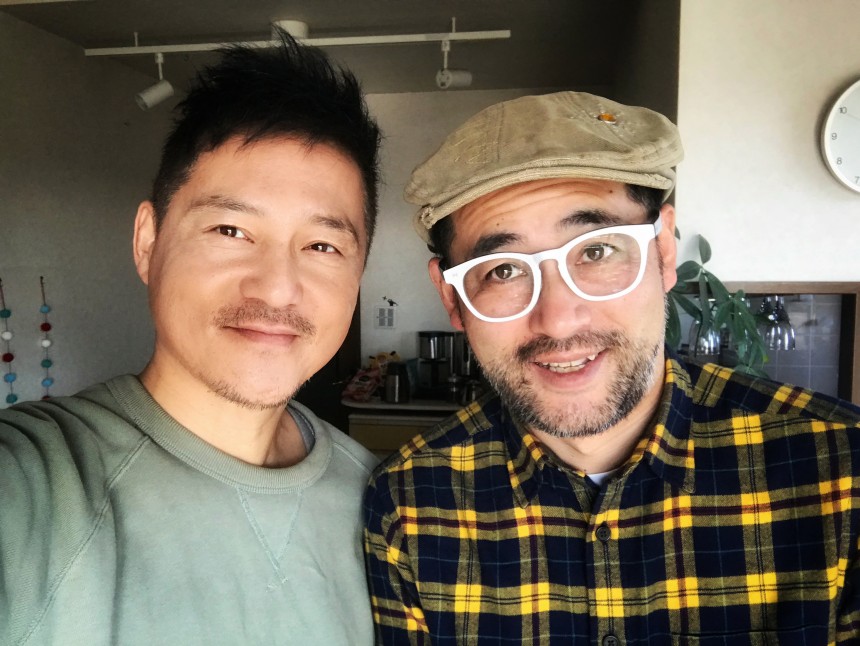 Shinichi and Satoshi are the hosts of the popular YouTube channel TabiEats, where they travel around Japan, cooking and sampling food. Like many Japanese couples, the two aren’t outwardly affectionate on camera, and didn’t define their relationship explicitly to their 200,000+ subscribers. Speculation was dispelled when the two were interviewed on the YouTube channel Asian Boss, discussing their experiences as a same-sex couple in Japan. Shinichi was kind enough to talk about their relationship to Metropolis.

“We met online through a dating site. This was way before smartphones were invented so there were no useful apps like these days. Satoshi answered my ad. We decided to meet up after a few back and forth emails. He sent me this gorgeous photo of him. When we met up, he looked nothing like the photo, haha. But I guess it worked out because we’ve been together for 17 years. We live together but we are not married. I’m not sure if we’ll get married in the future. We’ve never really talked about it.”

I do feel that things change slowly here in Japan. If we don’t stand up for our rights or for any kind of change, it won’t happen.

As LGBTQ people in the public eye, the couple are no stranger to prejudice. “We get hateful comments all the time but fortunately we have even more comments from people who appreciate what we do. That [Asian Boss] interview was especially difficult for Satoshi because his parents still do not accept him being gay. He’s never been so open in the public until that interview. I’m very proud of him.”

Shinichi is hopeful that things are moving in the right direction, but urges people in Japan to be more proactive. “I definitely think [the same-sex partnerships] are a step in the right direction. I do feel that things change slowly here in Japan. If we don’t stand up for our rights or for any kind of change, it won’t happen. We need to make it happen. Whether gay or straight, or whatever the color of your skin, we all just want to love and be loved.” 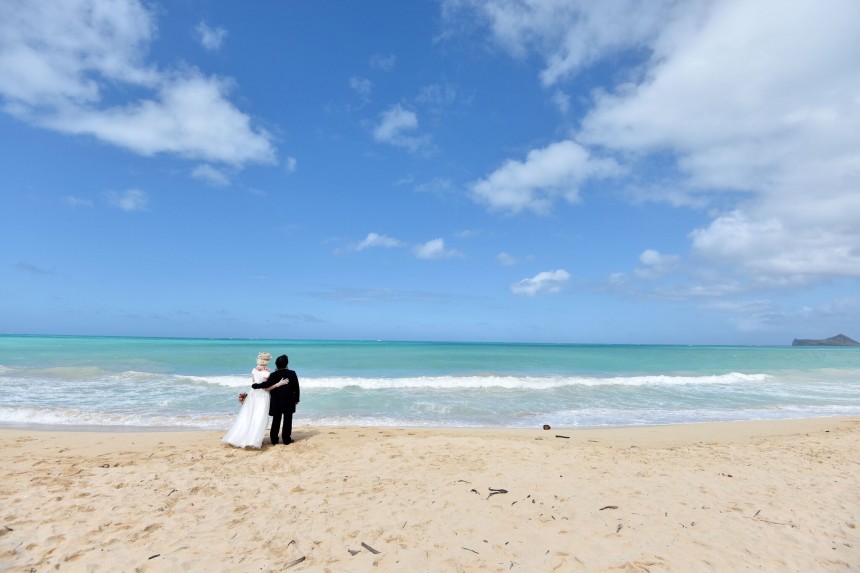 A and J are a testament to what the love and activism of ordinary people can accomplish. Married in Hawaii in 2017, the two women were frustrated by the lack of recognition of their relationship in the city of Wako, where they live. They created a petition to introduce a same-sex partnership system as well as measures to prevent discrimination against LGBTQ people in Wako. “We managed to collect over 400 signatures, of which 318 were counted due to the strict restrictions. We also petitioned for signatures in front of Wakoshi Station, hoping to spread information about the movement within Wako. In addition, we also met with the city council members and discussed LGBTQ issues. On September 10, [our petition] passed the Committee on General and Environmental Affairs with all seven members in agreement. Then on September 21, it passed the city council with 16 in favor and only one member opposed. Since passing the city council, we’ve been in contact with the head of the department in charge of executing the petition to discuss the needs of LGBTQ people in the city and what can be accomplished with the implementation of Partnership Certificates in Wako. However, it seems that they want to collect a lot of information before proceeding with its introduction, so it may require more effort, especially from LGBTQ people in Wako, to achieve real progress.”

Although the introduction of same-sex marriage won’t solve all of the problems LGBTQ people face in Japan, it is important for various legal protections.

Despite fighting so hard for a partnership certificate, A and J acknowledge that the Japanese system is flawed. “We see it as a good tool for spreading awareness of the need of same-sex couples to have legal protections. Unfortunately, the certificates have no legal bearing and their utility is limited to private corporations that recognize them, such as cell phone companies that accept them as proof for family plans. However, at the moment they are better than nothing, or even foreign marriage certificates, which are generally not accepted for anything in Japan.”

For A and J a lot of work needs to be done to achieve true equity. “Currently in Japan, there are same-sex couples raising children with only one of the parents having parental rights. There are also cases of the surviving partner losing everything after their partner dies due to having a lack of legal recognition. Although the introduction of same-sex marriage won’t solve all of the problems LGBTQ people face in Japan, it is important for various legal protections. LGBTQ people are here to stay, so we hope the government comes to understand that our rights can’t be ignored.” 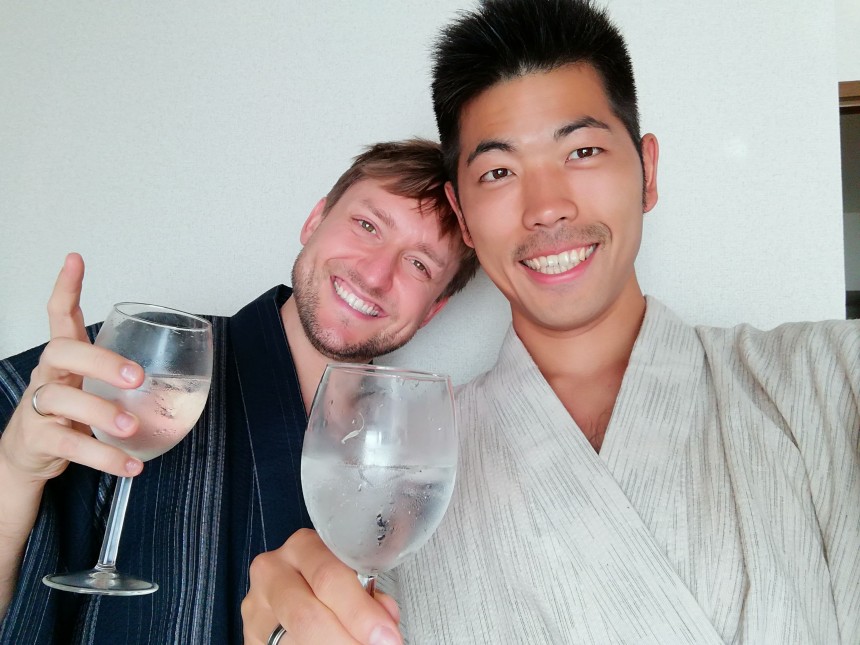 Internationalism can be a double-edged sword, if one partner is from a country where same-sex marriage is legal. On the one hand, these couples have the opportunity for their marriage to be recognized in one partner’s home country; but they also live with the cold hard fact that they lose those rights when they touch down on Japanese soil.

Matthew and Koki are an American/Japanese couple, married under U.S. law. “We do not believe marriage is the right choice for everyone, but especially for international couples it is important. Visas. Medical issues. We want to be able to live here, in the US, or in another country together and being married makes that easier. That and we get to wear these cute rings.”

We hope that by being open about our situation, couples like us will come forward and do the same.

Although they recognize the positive symbolism of Japan’s same-sex partnerships, Matthew and Koki are skeptical of the practical benefits. “It is important to be clear that [the partnership certificates] are more for promotional purposes than for actual LGBTQ rights. Though Ken Hasebe, Shibuya’s Mayor, was nice enough to include a kind apology for denying our marriage, we do not believe that this system is worth spending our time and money on.”

For Matthew and Koki, being a positive example is the way to move forward. “We hope that by being open about our situation, couples like us will come forward and do the same. We just want to have the same rights any loving partner wants: to be able to have our husband/wife next to us in the hospital, to be able to make a future together, to live without fear of losing our job or apartment because of who we love.” 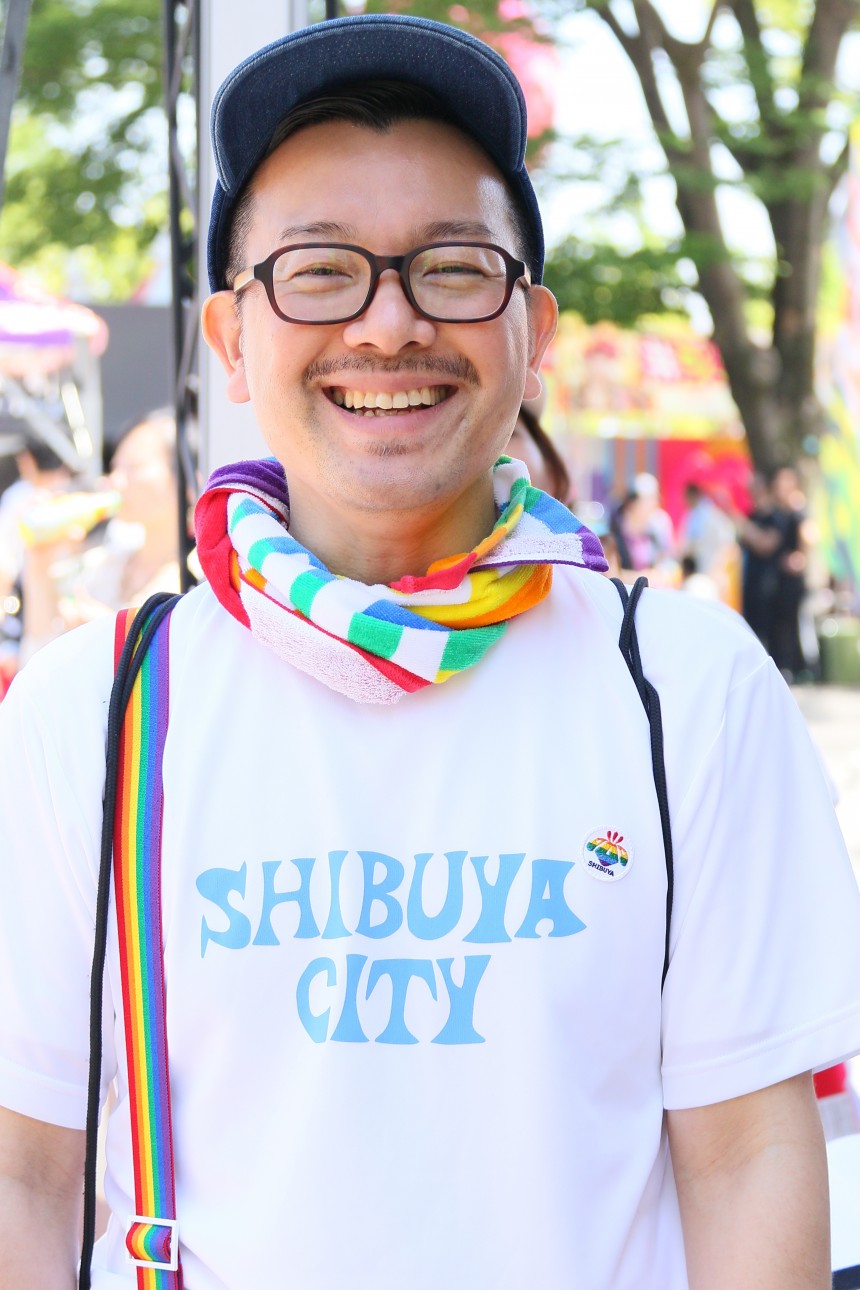 The remarkable Ryutaro Nagata works tirelessly as the “Diversity Lead” at Iris, Shibuya’s Gender Equality and Diversity Center. Day to day, his work involves issuing partner certificates, managing community spaces for LGBTQ people and running campaigns such as “Shibuya Rainbow Stores”, which provides posters for businesses to show they are an LGBTQ friendly point of purchase.

Imperfect though it may be, Nagata is rightfully proud of what has been accomplished in Shibuya Ward. “As the town of Shibuya has developed by accepting various peoples’ cultures and business, its history embodies diversity and inclusion. I believe that this historical background has lead to Shibuya being the first town in Japan to provide same-sex couples a partnership certificate.” While it’s true that the partnerships have no legal bearing, Nagata believes in their power as a symbol. In 2017, Iris conducted a report into the partnerships two years after their introduction and found, “Being recognized by society was a huge source of empowerment for members of the LGBTQ community. Problems for LGBTQ people are not always restricted to legal rights, they also manifest as poor mental health. As such, feelings of empowerment are extremely important.”

I think that it’s important to begin with some dialogue and foster the consciousness that LGBTQ people are simply your neighbors.

A gay man himself, Nagata knows all too well the discrimination LGBTQ people face in Japanese society. For him, the way forward is to push back and against apathy and ignorance: “In Japan, many people believe they have never spoken directly with an LGBTQ person and a lot of ignorance stems from this perception. I think that it’s important to begin with some dialogue and foster the consciousness that LGBTQ people are simply your neighbors. Particularly, in Japan, I think it is better to think that it isn’t a matter of ‘LGBTQ vs. straight’, rather, ‘LGBTQ and allies vs. apathetic/hostile people.’”

Equally important to Nagata is the need to coordinate with other groups to fight for change. “Japan sits at 110th place on the global gender gap. Many people consider gender equality a different issue to discrimination against LGBTQ people, but these types of prejudice have the same roots. Focusing on LGBTQ issues in isolation won’t make a society that is easy for LGBTQ people to live in. By joining hands with activists working in other fields, I hope we can form a movement that creates a society that’s free from all kinds of discrimination.”