Expanding the Coming Out Narrative

From California to Japan

Before coming to Japan to become an English teacher, I was heavily involved in the LGBT community in Southern California. We often discussed the importance of being “out” and being proud of our identities, being confident in who we were, and how our differences produced unique experiences.

So one night in Japan, when I found myself slightly tipsy at an after-school nomikai (drinking party) and realized that I was going to come out to my co-worker — about to assert my individual identity on to a Japanese person — I was surprised by my hesitation. After all, I had been out and proud with my family and friends in the States for almost eight years. I was following the Western script of declaring space for my identity to be discussed and wrestled with. I was making visible what was previously invisible. And I was doing so in a space that was culturally sanctioned for “taking off the mask,” removing our flawless tatemae and saying what we meant.

I think it’s time to complicate the discussions on visibility versus invisibility, the value of coming out as a tool of liberation, and the ongoing struggle to define how we — as foreigners — engage with queerness in Japan.

And yet, there was this sinking fear sitting in my stomach. I remembered the one time at our bōnenkai (year-end party) when our school superintendent scoffed that I was sitting like an okama (a faggot), my legs crossed and tucked to my side in a lazy seiza lean. I remembered the aggressive lecture from my principal to take a date to Suidobashi, and to “take a girlfriend, not a boyfriend.”

At the time, I’d brushed the paternalistic lectures aside, but somehow they’d become lodged in my unconscious. Even as I led my co-worker to the hallway of the small izakaya we were at, I paused, trying to remember why I felt the need to come out to my JTE. Did I want her verbalized support? Did I want to change hearts and minds about queer people? Would she tell people? Would the board of education find out? How would this change the working relationships I had built over the past two years? 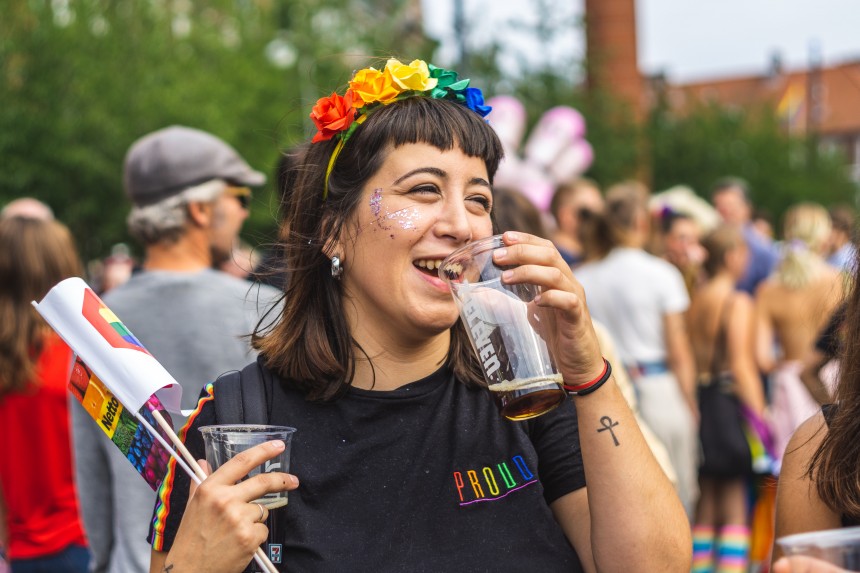 It wasn’t like I wasn’t open in other parts of my life in Japan. I’d been the Block 3 coordinator of Stonewall Japan for the Kanto/Tokyo area for two years, running events for both the foreign and Japanese LGBT+ communities. I had my LGBT island, and I had my work island — and I kept them separate. Why did I want to bridge them now? I had very little to gain and possibly a lot to lose.

Fumbling for the right words, I took a deep breath and told my JTE I was queer. She gave me a hug and thanked me for letting her know, and she promised to keep it a secret. I found a strange sense of comfort in those words, knowing that I hadn’t caused too many ripples in my workplace relationships.

When I showed up to work Tuesday morning, we exchanged quick nods before returning to our normal work routines. Although my friends back home wouldn’t have been satisfied with this quiet acknowledgement of my identity, I felt a sense of relief.

I also felt — and still feel — slightly melancholic about the experience. In my JTE’s silent support for my queerness, I realized that my queerness was negligible in the workplace. It didn’t seem to have a place, and I’m not sure it ever will. And that’s been a huge shift for me.

Being so invested in LGBT+ organizing in California meant my queerness had been the center of my identity. It framed my friendships and all the projects I was working on—academic, literary and artistic. But here in the Japanese workplace, other parts of myself were the center: my hobbies, my foreignness and my English ability. Queerness had become compartmentalized, moved around and isolated to particular (and important) spaces in my life outside of work. I no longer see being “out and proud” as the primary way to fly my colors. I’ve found other ways of building community and sustaining it here in Japan.

I’m still wrestling with this recent shift in consciousness. Coming to Japan, many sempai ex-pats warned me that Japan was an extremely “closeted” society, where people were too timid to openly embrace their identities. But I don’t feel it’s fair to judge a person (and an entire group of Japanese LGBT+ folks) based on their “out” status—especially in a culture that’s different from how I was raised. The judgment of Japan as a “closeted” society is insensitive to the real, lived experiences of Japanese LGBT-identified people. And I think it’s time to complicate the discussions on visibility versus invisibility, the value of coming out as a tool of liberation, and the ongoing struggle to define how we — as foreigners — engage with queerness in Japan.