Skiing in Hokkaido, beaches and karate in Okinawa… Japan is a country with huge natural and sporting variation.

Hot on the heels of Japan’s success at the PyeongChang 2018 Olympic Winter Games, interest in sports amongst Japanese people has been revitalized as the country looks forward to hosting Tokyo 2020 and the 2019 Rugby Wold Cup. Overseas too, these historic sporting events have put Japan on the sporting map. International tourists are becoming more interested in participating in outdoor activities on their visits to Japan, often in locations far off the beaten tourist track of Tokyo, Kyoto and Osaka.

Thanks to this increased exposure, visitors are starting to understand the appreciation of the natural world that is so deeply embedded into Japanese culture. Every location across Japan is worth experiencing in each of the country’s four seasons, not just during cherry blossom time. More than that, a single trip to Japan can take you through several seasons as you traverse the scope of the archipelago. A two week holiday in March could easily involve blossom viewing in Nikko, snow sports in Hokkaido and sunbathing on the beaches of Okinawa. Climate aside, the culture of Japan also exemplifies the archipelago’s diversity. Whether you take to the piste or the seas, you are always guaranteed a taste of Japanese washoku cuisine with a local twist, and natural onsen waters that vary even within a region.

Join JNTO as we take a brief tour from the northernmost extremes of Hokkaido to the southernmost reaches of Okinawa, all undertaken back to back in early spring. Along the way we capture Japan as it gears up for next year’s Rugby World Cup, with the Tokyo 2020 Olympic Games just on the horizon. 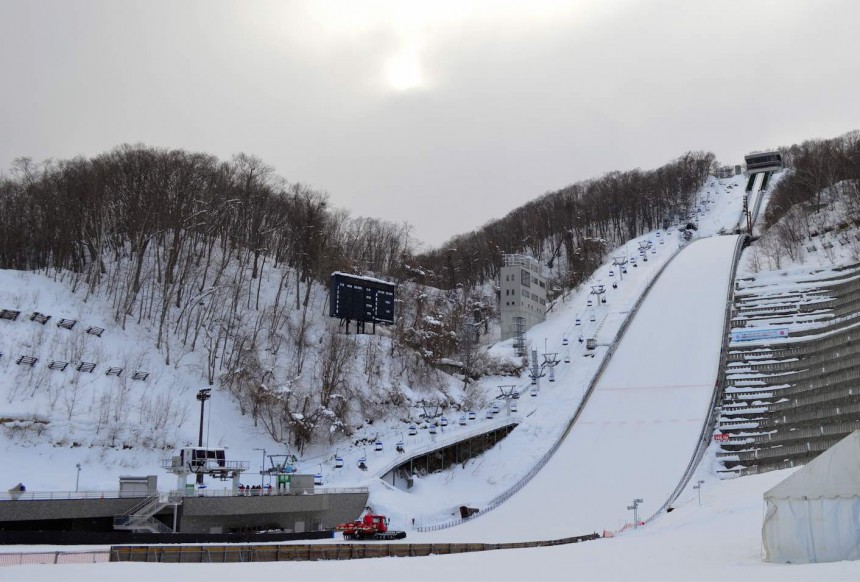 A short flight away from Tokyo, Hokkaido is more accessible than you might think. The moment you arrove in Hokkaido’s capital, Sapporo, you know you have reached an area of Japan with a character all its own. An energetic city, Sapporo still carries the sporting legacy of the 1972 Olympic Winter Games. The Sapporo Dome stadium will host the 2019 Rugby World Cup as well as the soccer for the 2020 Olympics.

Truly, the competitive spirit has long been alive and well in Sapporo. In the 19th century, the famous professor Dr William Clark came to Hokkaido to help establish Sapporo Architectural College (now Hokkaido University). As he was leaving Sapporo to return home to America, he famously said, “Boys, be ambitious!” to his students. This phrase came to describe Sapporo’s determined and sporting spirit. Today, you can see the motto etched on a bronze statue of Dr Clark on Sapporo’s Hitsujigaoka Observation Hill, where you can overlook the entire city including the impressive sporting dome.
Also located on Hitsujigaoka Observation Hill is Sapporo Snow Festival Museum, a celebration of the city’s world famous snow festival. In February each year, this remarkable festival showcases Sapporo’s vitality. A mix of competition and culture, teams build huge snow sculptures depicting subjects as diverse as popular anime characters, Olympic motifs and landmarks from around the world. If you’re in the mood for competition proper your next stop should be Sapporo Olympic Museum at the seat of Okurayama Ski Jump Stadium. You can climb the jump yourself and get a taste of the vertigo the athletes must face. The museum also captures Japan’s love of winter sports, from Japanese geta fitted with ice-skating blades to the Imperial household’s own collection of antique skis.

As you would expect, Japanese hospitality extends from the locker rooms to the piste, and you will find top-class equipment rental to match the quality of the powder snow outside. The various skiing and snowboarding routes are well maintained and the surrounding nature simply stunning; you can instantly see why these mountain ranges were revered as gods among Hokkaido’s indigenous Ainu people.

To get even closer to nature, snowshoe trekking offers a more leisurely way of experiencing silent snowy glades, and perfect landscapes punctuated only by animal footprints in the snow. With an experienced guide a trek can highlight just how Japan’s snowy landscapes are different from those elsewhere in the world, not just in their foliage and wildlife, but also the natural hot onsen springs that punctuate the volcanic sculpted peaks. At the end of an adventurous day the steamy onsen is the perfect way to relax. 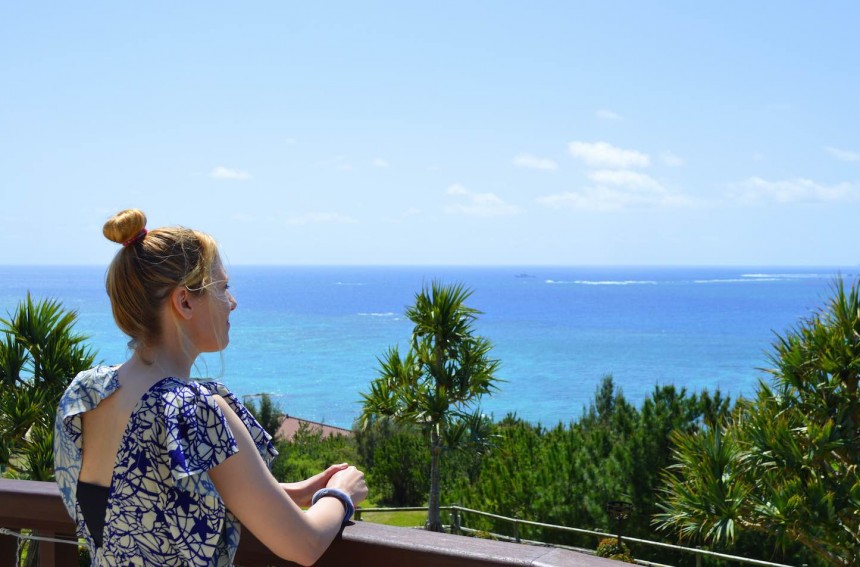 From north to south, snow to sun, like Hokkaido, Okinawa was one of the last territories to become part of the kingdom of Japan. As such, in Okinawa you will find the culture of the indigenous Ryukyuan people is still a strong part of the islands’ identity, existing side by side with an American military presence.This hybrid culture reminds us that while there is clearly a strong sense of shared values in Japan, rich regional differences are still there for the solo traveller to discover.

Regarding sports, Okinawa’s most famous export might well be karate, founded in Naha, the islands’ capital. Okinawan karate varies slightly from the mainstream Japanese karate often exported overseas. It was originally developed as a form of peaceful self-defense and this pacifist element remains important to Okinawan karate to this day. Karate will get its long awaited Olympic debut in Tokyo 2020, which is sure to put Naha on the sporting map. Martial arts aside, Okinawa is famous for it’s beaches and the islands’ clear waters are perfect for swimming, diving and other water sports

It is hard to remember as you go from snowy wonderland to island paradise that this huge natural and sporting variation are part of the same country. And yet, Japan maintains cultural cohesion and a strong sense of national pride. This will be seen when these sporting traditions unite for the Rugby World Cup and the Olympics in the next couple of years. These historical events are sure to bring Japan’s rich athletic and cultural heritage to the world stage. 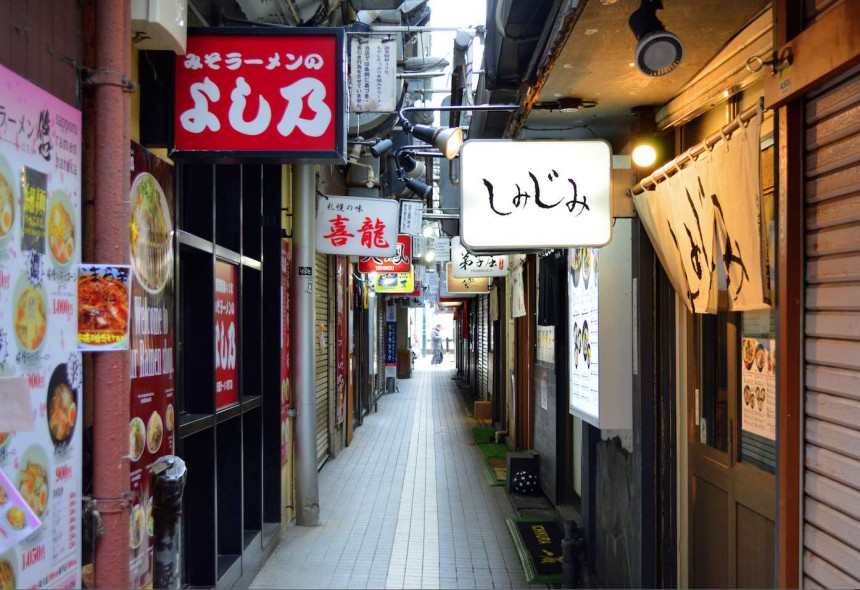 The Japan National Tourism Organization (JNTO) is involved in a broad range of activities promoting travel to Japan through various activities overseas as well as tourism-promoting activities in Japan. www.jnto.go.jp