A romanticized view of the distant past, more ageless than Instagram

But, as selfies on social media, apps like Instagram, and many well-known female photographers reveal, women have a much more complex interest in photography than simply being passive subjects. This female fascination with photography also has surprisingly deep roots, as the exhibition “Julia Margaret Cameron” at the Mitsubishi Ichigokan affirms.

As usual, the Ichigokan likes to focus on exhibitions that fit in with the period of its architectural identity. Although the museum is a facsimile of an earlier building that stood on the site and only opened six years ago, it’s built on a Victorian plan. So, it is not surprising that the museum is hosting this exhibition by one of the great photographers of the Victorian Period, someone who helped to pioneer and define the way we see photography today. This point is made in the exhibition’s subtitle: “A Woman Who Breathed Life into Photography.”

Many of the images come from London’s Victoria and Albert Museum, which bought and exhibited 100 of Cameron’s photos just one year after she acquired a camera and began teaching herself photography.

What immediately strikes you about the images in the exhibition is how old they are—Cameron started photographing in 1863, when she was 48 years old—and yet how contemporary they seem, with faces and expressions that could almost have been taken from yesterday’s social media. 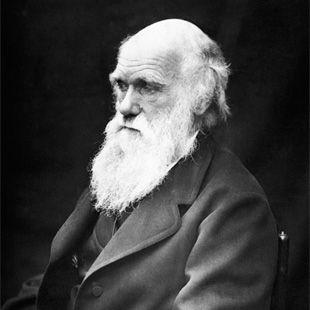 In Cameron’s day, photography was still very much a novelty. This, combined with the photographer’s social connections, gave her access to many of the celebrities of the day. Included here are portraits of the Poet Laureate Alfred Tennyson, the astronomer John Frederick Herschel, and Charles Darwin, the “Father of Evolution,” who looks suitably wise in his portrait, which Cameron  shot in profile.

People today tend to have a rather stiff and formal image of Victorian photography. This is partly because of the lack of color and the rather long exposures necessary, which required subjects to sit perfectly still for long periods. But many of Cameron’s photos break this stereotype, being full of expression, creativity, and elements of what can best be described as “cosplay.”

It’s obvious that Cameron, soon after mastering the basic techniques of photography, saw the medium as a form of painting. Accordingly, she started to dress her models in various costumes and arrange them in theatrical poses. A portrait of her friend Lady Elcho casts her in the role of the Cumaen Sibyl. Another shows the same friend outdoors as a “Dantesque Vision.” 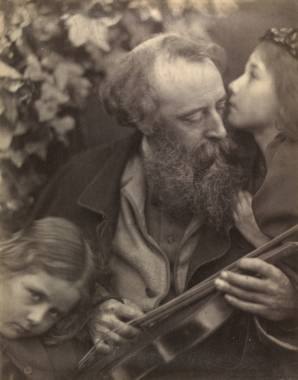 From these tentative attempts, Cameron soon moved on to more expressive compositions. In “Whisperer of the Muses” (1865), she shows a musician holding a violin, while a young girl in the guise of the muse of music touches her lips to his brow to symbolize the moment of inspiration.

There is a delightful Pre-Raphaelite atmosphere to many of Cameron’s photos, and this should come as no surprise. She socialized with some of the members of that artistic movement, and shared a similar romanticized view of the distant past. Old as they are, it’s this quality that helps give her photos a much more timeless quality than anything you might find on Instagram.