Playful views of the contemporary world

Distinctively simple and a contemporary synthesis of something between pop art and minimalism, Julian Opie is known for his use of digital media and is widely recognized for his commissioned album cover design for the pop band Blur. Yet the British artist’s practise has expanded over time to explore many other mediums too, including aluminium and granite sculptures, vinyl, LED installations and also public projects in various cities across the globe. Through these, Opie captures and interprets the modern day world that shapes us and our urban landscape by using the very materials and technologies that define it.

The recently-opened exhibition at the Tokyo Opera City Art Gallery is a perfect cross section of this diversity and experimentation. Visitors have the chance to view some of Opie’s latest pieces as well as gain a strong sense of his defining and influential style. 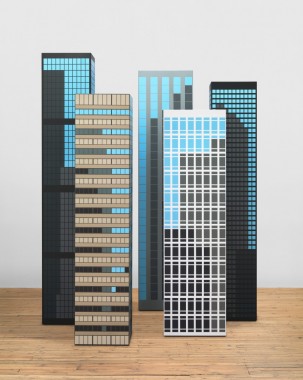 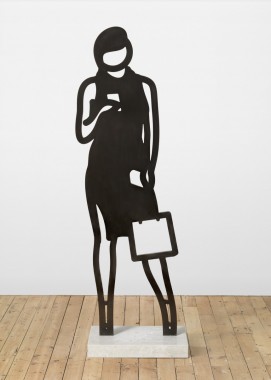 One of these newest works is the striking “Walking in New York 1.” A towering wall of auto paint on aluminium, the piece captures a snapshot of urban daily life through a cluster of walking pedestrians. In line with Opie’s classic way of depicting the human form, the people are represented as abstracted figures reduced to little more than solid black outlines and block areas of color. Homogenized through this simplified physical form and through their assimilation of the same distracted behaviors — hands in pockets with heads down, absorbed in music via earphones, engrossed by a mobile phone — the work simultaneously evokes a sense of group identity and of anonymity in modern city life. It also suggests some of the societal conventions present in many city environments.

However, within this homogeneity there is diversity. As with all of Opie’s human subjects, each figure is characterized through a single feature, and in this way they retain their individuality. Rather than abstract shapes, they become charged with personality through their accessories, hairstyles, tattoos, postures or clothing. Whilst walking through the gallery, viewers become a part of Opie’s crowds, and this experience might make viewers question what single attribute they would choose to be defined by if they were also to be reduced in this way.

The process of reading things as simulations but knowing at the same time that they are real is quite central to my work. — Julian Opie

Even as simple outlines without faces, it’s easy for us to identify with the people and the scenario of the snapshot before us. As inhabitants of the urban mass of Tokyo, being part of a crowd is part of our everyday mundanity. This is one of the powers of Opie’s work. Although there may not be the same level of clarity and detail as a photograph, its simplicity allows us to capture the essence of each scenario and how that relates to our own worlds. 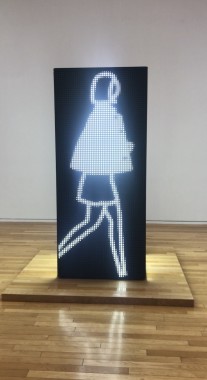 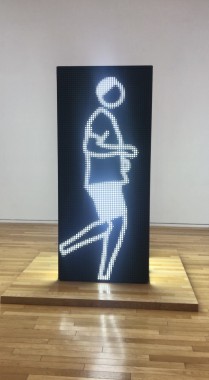 When moving away from static images to animated LED monoliths and screens, such as with “Sonia Elvis Elena Paul,” Opie’s work takes on an important shift. The figures, now merely outlines depicted by LED dots, are able to enact the physical movement of walking through the city. Just like in the crowds in reality, they have their own characteristic gaits on their journeys to destinations unknown to us. Travelling around the monolith’s four sides, viewers are invited to follow them and walk around the piece themselves, which playfully echoes and engages with the movement of the city.

Open until September 23, 2019, this exhibition is a rare chance for Tokyoites to see some of the latest works of one of the UK’s leading contemporary artists. It’s made even more special by the fact that it’s Opie’s first large-scale solo exhibition at a Japanese art gallery in 11 years. The ticket also grants free admission to “From the Terada Collection/ 067” and “project N / 76” on the upper floor of the gallery space, which celebrates the work of Japanese artists Ikeda Ryoji and Suematsiu Yukari.