As you step out of Tsuruhashi Station and into the undercover market that snakes towards the center of Ikuno-ku, the smell of barbecue wafts your way. Many of the signs hanging above the mismatched stalls that line the walkway are in kanji, but the area feels distinctly un-Japanese.

This is a different side of Osaka: older, quieter, more run-down, and home to one of Japan’s biggest Korean resident populations. Tsuruhashi’s “Koreatown” is already well known among locals but is becoming increasingly popular abroad.

The presence of Koreans in Japan is largely a result of Japanese colonization of the Korean peninsula. During World War II, many Koreans were brought to Japan to take over work in the coal mines and factories so that more Japanese could enter the military. Another influx of Koreans then arrived in the 1950s, after the communist uprising on Jeju Island. By this time, there were more than two million Koreans living in Japan. 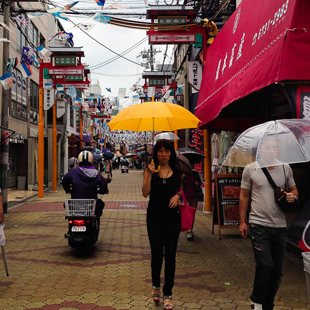 Ko Yong-hui, the mother of Kim Jong-un, was born and raised in Tsuruhashi until her family was repatriated after the war. Many other families chose to return to the peninsula, but those who felt they had nothing to go back to stayed behind.

While many Koreans ended up naturalizing and taking Japanese citizenship, others chose to continue to send their children to Korean schools, keep Korean names, and maintain a non-Japanese identity in segregated communities.

Tsuruhashi is one such settlement, and the heart of this “Little Korea” is Miyukimori Shopping Street. Traditional gates guard each of the 600-meter avenue, lined with stores that collectively offer the neighborhood’s biggest selection of K-pop goods, Korean cosmetics and clothes, kimchi, and other delicious Korean foods. 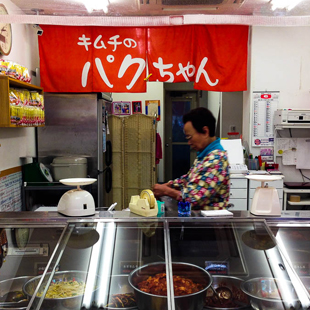 Park-chan is known for their octopus radish kimchi, which starts at ¥500. They offer a total of 10 different varieties of the pickled cabbage, all handmade from family recipes. They also sell about 17 different kinds of side dishes, including gejang (salted, fermented seafood). For lunch, you can try the new Keihana, which serves a range of traditional Korean dishes like bibimbap (mixed rice) and bulgogi (grilled beef). Korean dramas play on a TV fixed to the wall, and the staff are helpful and friendly.

The café on the first floor of Hiro’s Guesthouse has a good reputation for being cozy and relaxed. The owner allows guests to bring in food to eat from the outside stalls. The guesthouse itself offers air-conditioned dormitory and tatami rooms with free Wi-Fi and linen.

Even if you’re not in the market for one, the elaborate Korean wedding dresses and national costumes at Kumugan are worth a peek. The beautiful traditional attire is available both to order and rent.

K-Station is not only the largest shop in Koreatown; it also has the biggest offering of K-pop CDs and Korean dramas and movies, and additionally sells cosmetics.

For more cosmetics and miscellaneous items, including K-pop and Korean celebrity merchandise, you can check out SAMI, which has two branches of the same shop on Miyukimori.

There are over 130 stores in total to explore, making a visit to Koreatown a trip all in itself. Visitors can also combine it with a visit to the nearby Osaka Castle.