The slow, steady beats of the taiko drum hang in the air as a lone actor poses midstage. He is clad in an elaborate, kimono-like outfit with long hair flowing over his shoulders. The monotonic rhythm is pierced by the tune of a yokobue flute, to which the actor moves energetically yet gracefully.

Kagura, a variant of Shinto (Japanese indigenous religion) theater, may not be as well known to foreigners as kabuki and noh. However, kagura is just as significant to Japanese culture and spirituality, if not more so. Kagura, like kabuki and noh, blends traditional music, dance and Japanese pantomime to tell stories based on folklore and mythology. But unlike the better known artforms, kagura is conducted without a single spoken word.

Literally translated to “god-entertainment”, kagura was originally performed as sacred rituals by shrine maidens for the Imperial Court. While the performance was later made accessible to the masses, the respect and worship for the spirits still remain.

“We invite the gods down from the heavens, and we perform for them. Of course, we also perform in front of an audience, but it is with the gods’ blessings that we do so,” Hiromasa Ishiyama tells Metropolis. He is the current master of the Ishiyama Shachu, the oldest kagura performance company in the Kanto region. “It’s a theater where one can feel the gods, where the gods are worshipped.”

The Ishiyama Shachu has been performing the Bushu Sato Kagura, or the folk kagura in the modern day Kanto region, since the Edo period. The Bushu style ecompasses the Edo variant of the performance, which was designated as “Important Intangible Folk Cultural Property” by the Japanese government.

While the importance of kagura to Japanese traditional culture is evident, interest in the art has unfortunately been on the decline: “The Japanese people who come to my shows tell me that my performances were entertaining, or that they were glad they came, but the fact that not many are even willing to come is an issue,” he laments. It’s a shame, he says, because “there is lot packed inside traditional art to learn from.” 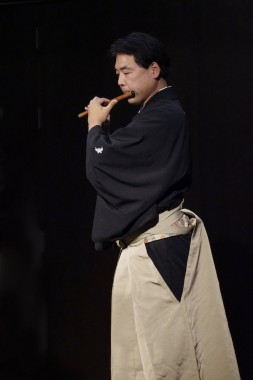 Hiromasa Ishiyama plans to change that. Since becoming the tenth master of the company, he has increased public performances to get more people interested in kagura. His shows have taken him all across the country, including the Kabukiza theatre and the National Theatre of Japan. He has also recorded CDs and DVDs of his performance.

Ishiyama’s efforts seem to be paying off, as he says there is a demographic that is more interested in kagura than ever: foreign audiences. “The enthusiasm foreigners show to our performances is overwhelming,” says Ishiyama. “The performance must seem very exotic and new for them, and they are very keen on learning about the traditional culture.”

Ishiyama sees a solution for the artform’s woes in foreign audiences’ love for kagura. “It’s hard to get Japanese people to come to our performances and appreciate kagura, but if people see foreigners taking an interest in kagura, that might prompt the Japanese people to reevaluate our art.”

To this end, Ishiyama will be holding a kagura performance on March 31st with English commentary at Shibuya Cultural Center Owada. He will be joined by two speakers, with whom he will discuss the charms of kagura for an English-speaking audience. The event is part of the Beyond 2020 initiative by the Japanese government to showcase the best of Japanese culture for a global audience.

Ishiyama hopes that foreign visitors who come to the performance can enjoy the “good old tradition” that kagura has to offer. “I hope that the long history of Japanese culture can be appreciated.”