The reason that Conder was such a pivotal figure was not just because of his technical skills as an architect—he worked under the Gothic revivalist architect William Burges in England—but because he also had a deep affinity for the Japanese people and their culture. 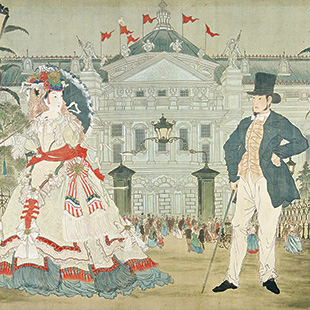 Among other things, he even wrote the first book in English on ikebana. This positive attitude to his host country made him an ideal figure to assist in the modernization of its architecture.

The exhibition presently held at the Mitsubishi Ichigokan Museum focuses on one of the most fascinating aspects of Conder’s relationship with Japan, namely his association with the famous Meiji-Period artist Kawanabe Kyōsai, who agreed to teach the Englishman traditional Japanese painting.

The exhibit contains biographical materials on both men—photographs, personal letters, architectural plans by Conder (of the actual building the exhibition is being held within!), etc. But it also includes a good selection of Conder’s own Japanese artworks. He painted these under his Japanese artist name of “Kyoei,” a somewhat tongue-in-cheek name that means “the English Kyōsai.”

It’s clear from the examples on display, like his silk painting Swimming Carp (undated) and his folding screen Ling Zhao and Shide (undated), that Conder was a quick learner and attained considerable proficiency in Oriental art. 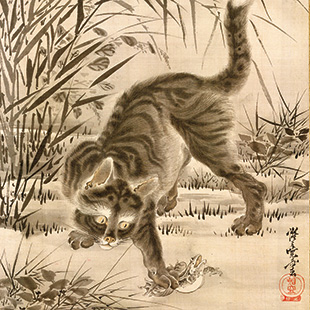 This is a fascinating storyline, but it’s more in the nature of an exotic appetizer. The bulk of the exhibition centers on the work of Kyōsai, an extremely active and prolific painter in the decades before his death in 1889.

But the best of his works, in my opinion, are the charming paintings of animals, which he painted near the end of his life, such as Owl Mocked by Small Birds (c. 1888), Monkey Hanging from Grapevines (c. 1888) and Cat Catching a Frog (c. 1888). These often have an endearing comical or macabre twist, which speaks of an old man’s sympathy for his fellow creatures. Most of these works are ink and in very light colors on silk, with the fur of the animals evoked with particularly beautiful and soft brush strokes.

Several of these works are also accompanied by sketches, inscribed, “Preparatory drawings for the Englishmen.” This suggests the pictures were painted at the behest of foreign buyers, although, shortly after Kyōsai’s death, they were purchased by a rich American collector and are now part of the Metropolitan Museum of New York’s collection.

Overall, this is a rich and fascinating exhibition that has several interesting stories to tell, and lots of visual variety.