Leading culinary institute’s seminar showing a different side of sake

As a clueless twenty-something year old, the pressure to live the ideal modern adult life is omnipresent. We all aspire to be the person that has reached prominent life goals such as learning to fix a flat tire, paying for travel insurance and using eye cream on a regular basis. While it will personally take another good five years to adopt those particular milestones, a recent trip to the revered French culinary institute, Le Cordon Bleu, has helped to satisfy one life goal: to attend a gastronomy workshop and pick up dinner party-worthy facts.

Established in 1895, Le Cordon Bleu is one of the oldest cooking schools of culinary arts and gastronomy, boasting a rich repertoire of programs and celebrated alumni like Julia Child, Giada De Laurentiis and Great British Bake-Off legend Mary Berry. Its Tokyo branch is located in the chic neighborhood of Daikanyama, tucked into an alley off the main road. The sleek, navy blue facade stands out against an exposed red brick wall, exuding a distinctively European vibe that echoes the poised atmosphere of a Parisian bakery. 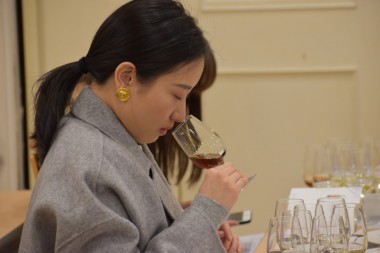 The institute is comprised of multiple stories, with the ground floor acting as a bakery/cafe space. On a warm and sunny day, these tables are occupied by throngs of well-dressed women chatting over French pastries and afternoon tea. The magic, however, happens on the other floors. In professional kitchen classrooms, aspiring chefs busy to complete their dishes for chefs to grade their work. Elsewhere, students sit in demonstration kitchens for lectures from chefs and industry experts. Alongside these intensive culinary diploma programs, Le Cordon Bleu also hosts a series of seminars and workshops centered on French culinary arts for everyone.

Recently, the institute has broadened its focus to include education in authentic Japanese cuisine, offering classes on washoku (Japanese cuisine) staples. Le Cordon Bleu invites seasoned professionals trained in this genre to give lectures on specialty ingredients and lessons on making intricate dishes such as wagashi (Japanese sweets). In this session, Metropolis was invited to sample nine combinations of Hiroshima sake with an assortment of well-known cheeses. Led by certified sake connoisseur Sebastien Lemoine, the two-hour seminar dives into the history of sake production in Japan before introducing students to the world of tasting. The series of sake classes are offered in English, Japanese and Chinese, giving foreigners the rare chance to get close and personal with top industry experts.

Lemoine does a fine job as a knowledgeable speaker, taking the time to dissect certain concepts and terminology, while also giving an in-depth analysis of the brewing process behind the sake presented at the seminar. For liquor enthusiasts who aren’t familiar with Hiroshima sake — let alone sake culture in general — this seminar is a must. 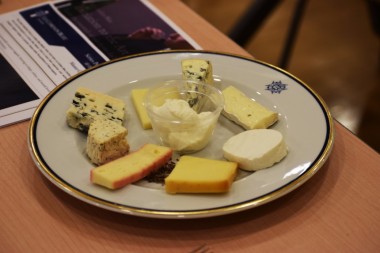 One of my favorites was Iikaze “Hana” Junmai Ginjo, a light-bodied yet strong sake produced by local brewery Yamaoka Shuzo. Paired with a slice of St. Maure — a full-fat unpasteurized French goat cheese infused with hints of hazelnut and a sharp acidity that dances around your tongue — the sake cuts through the buttery milkiness and delivers on the umami factor. As was the case with a majority of the pairings, the sake often acted as a denominator to the cheese, lifting the entire flavor to a lighter note while teasing out hidden flavors. Lemoine offers his opinion on each pairing but for those who are curious, there is a student textbook that comes with each session which provides background information on the food as well as a flavor wheel to help you identify what you’re tasting. These elements reflect Le Cordon Bleu’s proactive approach to gastronomy; although students are not required to be knowledgeable on food, the lectures are conducted at a higher level that delves into specific terminology and production processes. Educational, yet accessible, Le Cordon Bleu offers a range of culinary workshops throughout the year with various disciplinary focuses.

Steve Jobs once said that the key to success is to stay hungry. While the tech giant meant ‘hunger’ in the metaphorical sense of maintaining curiosity, it also applies to the act of eating as well. You can go on in life not really caring about what you eat and why you eat certain foods, but when you do take the time to learn about food you become more appreciative of every bite. Le Cordon Bleu brings Japanese food to the forefront and breaches new ways of understanding different cultures and their cuisine. As Lemoine suggests in his closing address, “the future of sake is not washoku… the future of sake is the food that [everyone] prepare[s] at home.” By pairing two seemingly distinctive genres like French and Japanese cuisine, you can open up your palate to a new way of experiencing food.