Little Old Me in the Universe and Art

An exhibition covering space, time, our future, and aliens

It feels a little like space travel as my ears pop while I shoot up the elevator to the 53rd floor. For my first time in the Mori Art Museum in Roppongi, I hadn’t expected it to be so high up. The lift sent me sky high as if I were on a space mission. This fits all too well for the current exhibition, The Universe and Art: Princess Kaugya, Leonardo da Vinci, teamLab. For someone who gets vertigo from zooming out too far on Google Earth, this whole experience was pretty thrilling for me. 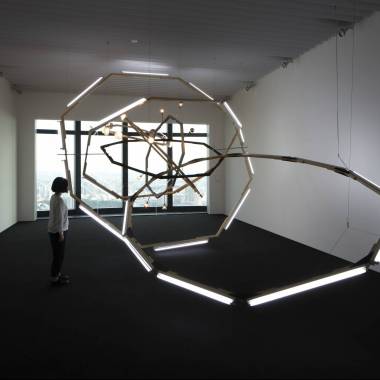 The exhibition really opens your eyes to the vastness of our whole universe and our limited understanding of it. It makes you feel tiny, but at the same time this exhibition is about getting our brains whirring with ideas on where we came from and where we are going. It is comprised of four sections posing some very good questions: “How Have Human through the Ages Viewed the Universe?”, “The Universe as Space-Time”, “A New View of Life – Do Aliens Exist?” and “Space Travel and the Future of Humanity.” All this is explored through both very old and very new art.

The first section focuses on how we’ve tried to make sense of the world around us through religion, myths, and astrology. Knowledge of time, months, and seasons is universal, and second nature to us all. So it’s fascinating to see how we created measurements of time by observing daylight and moon cycles and the seasons around us.

Then there’s the sword made with the iron from a meteorite that fell in Japan. It took Okayoshi Kunimune an arduous three weeks of work and many prayers at the Hikawa shrine to make it.

The second section of the exhibit features more contemporary pieces, such as a reinterpretation of the Milky Way titled Black Hole by Björn Dahlem. It stands in its own room and overlooks a gorgeous view of Tokyo. Look away from Dahlem’s multiple galaxies and supermassive black holes and you can see tennis matches on rooftops below, or a school soccer team practicing in a field in the distance. The view is probably remarkable at night too.

Another piece was a huge, mesmerizing mechanical sundial that I sat and watched it for at least 3 minutes. This is one artwork where I can understand the patience of art gallery guards–of course it’s easy if you’re hypnotized the whole time! 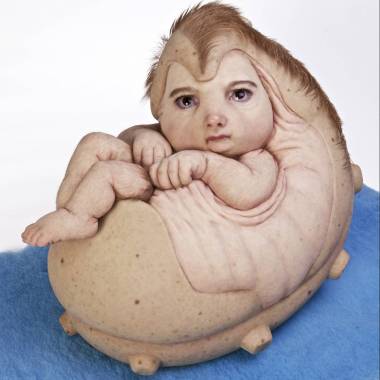 My favorite area was the third section. Charles Darwin’s Origin of Species reminds us that species are constantly changing to best adapt and survive as a favored species. Not far from this idea we see Patricia Piccinini’s The Rookie, a terrifyingly lifelike sculpture of a child-slash-caterpillar. It implies that humans will genetically modify themselves in the future. But I highly doubt we would give ourselves hairy limbs and watery eyes. Let’s save ourselves the visit to the beauty salon.

Also fascinating were the ancient artworks depicting the “Utsurobune no Banjo” story–the landing of a so-called “hollow ship” in the Edo-period. The ship had unusual markings and a beautiful lady inside. Obviously, it was a UFO. HG Wells’ War of the Worlds magazine is on display, alongside other magazines proposing scenarios of what kind of aliens would live on what planet.

Finally, in the fourth section, meet a super Sexy Robot who towers over you while spinning seductively. You can see the transcripts and photos from NASA’s 1969 supposed “moon landing”. See what the architecture on Mars would look like, as well as algal space fashion (also quite sexy). teamLab also has an installation here, and the immersive light show combined with a dramatic soundtrack, unsurprisingly, gave me goosebumps. Twice.

The gift shop is very good too. There are some nice tote bags, and “Mission Emblem” embroidered patches to stick to your own tote bag or t-shirt. Browse for Cosmic Algal Cookies and Space Bread that comes in a can, or Sexy Robot notebooks and t-shirts, and a rice bowl designed to look like the hollow ship/UFO.

The Universe and Art is on until January next year, so you still have a bit of time to check it out. You’ll leave starry-eyed with your thoughts in another universe.