Making a slightly unlikely entrance onto the Tokyo fashion scene is My Little Pony, the beloved ’80s Hasbro franchise that has returned to pop culture prominence around the world thanks to 2010’s Friendship is Magic. This series reboot that spawned, among other things, the “brony” phenomenon—that is, grown men who watch the show; time will tell whether a similar culture develops around the franchise in Japan. 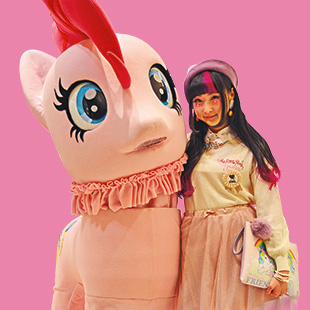 For now, the Rainbow Christmas in the Sky-themed unveiling of the pop-up in the Isetan Girl fashion department of Isetan Shinjuku seems to have captured an altogether stylish following. The launch of the clothing and accessory line in the high-end fashion hub of Shinjuku follows hot on the heels of a successful themed café in the kawaii-culture haven of Ura-Harajuku, which seems to have put My Little Pony back on the cultural map for a new generation.

I say “back on the map” because the original generation of kawaii fashion aficionados who birthed this culture on the ’90s Harajuku backstreets were directly inspired by the pastel-infused cute culture imported from the U.S.

The original My Little Pony series was a core component of this movement. Over the years, imported “cute” gave rise to “kawaii” in fashion, and it took on a life of its own to become the uniquely Japanese culture celebrated today. Thanks to the likes of cult Koenji vintage shop Spank, who kept 1980s pastel alive as “mode” monochrome and chic fashion arrived in the late 2000s, kawaii stayed in vogue. Now, that pastel cuteness seems to be back on girls’ fashion radar, and the timing couldn’t be better to bring the all-new My Little Pony to Tokyo. 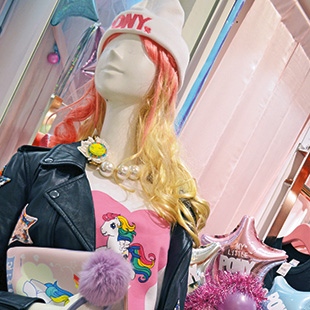 Display at the Isetan store
(Photo by Samuel Thomas)

Greeting fans at the launch was Harajuku and Lolita fashion icon RinRin Doll. The model was joined by new My Little Pony character Pinkie Pie, making for a suitably kawaii pairing that very much contextualized the brand in the otherwise luxurious Isetan. Early reports indicate that the brand is off to a storming start with a second volley of My Little Pony Japan-exclusive accessories and fashion set to join the lineup early next year.

Highlights of the current lineup include items themed with artwork from both the retro and new animated series, all next to sanctioned reinterpretations by some of Japan’s finest. One of these is illustrator Horaguchi Kayo, who put his own twist on the characters for a series of Isetan exclusives.

On the fashion side of things, kawaii was given a streetwear twist with a leather jacket emblazoned with motifs from the series, and hoodies that anyone could buy into. There were also more Harajuku-styled items that take someone like RinRin Doll to pull off: items packed with layers of sheer and lace, furry pompoms, and ultra-cute embroidery that begged you to enter the universe of My Little Pony. Actually seeing the plush toys lined up in-store next to the fashion brand really brings home just how much the fabrics and silhouettes of the Harajuku street scene have in common with plushes right now. As such, you can live every day in the rainbow world of My Little Pony if you choose. It seems for the current generation, fashion really is the toy of choice.

We’ll see whether My Little Pony will go on to build the fervent fan base it currently enjoys in Europe and America. However, I for one would advise you to keep an ear out for the distant sound of hooves trotting into Tokyo soon.