Footy Japan scores goals for those in need

If there’s one constant in the universe—at least the sporting one—it’s that football (or soccer, as it’s known to some) brings people together. One thing that many expats miss is the chance to play the beautiful game while in Japan, and also to share it with their kids. Thanks to Footy Japan, there’s no need to leave that part of you behind. Not only do they provide a place to compete and learn, they also offer a way to use this globally-loved game to make a difference for those who need help. In the lead-up to this year’s Charity Soccer 7s tournament, Metropolis sat down with Sid Lloyd, Managing Director of Footy Japan KK and NPO Centre Circle, to find out more about the organization and event.

Tell us a bit about Footy Japan KK. How long has the organization been around and who were the founders? 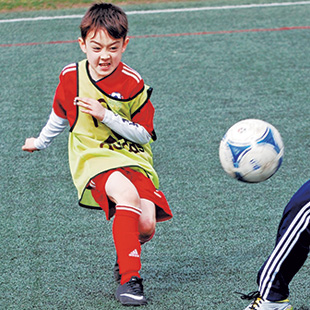 Footy Japan KK has been going for ten years, founded by myself, my wife Paco Hanaoka-Lloyd, and good friend Jonathan Day (who left us five years ago). We started the company to provide football to both the adult expat community (Tokyo Metropolis League) and international children wanting to play in an English-speaking environment (British Football Academy), as there was no real infrastructure providing these.

What are your primary goals? What initiatives and programs do you offer?

Our goal is to create the opportunity for international friendship and fun through the world’s most popular sport. We provide football classes throughout the year for kids ages 3-15, coached in English by qualified British coaches at six locations around Tokyo and Yokohama. Also, we run the 30-team, three-division Tokyo Metropolis League (TML)—now in its twelfth season—with 270 league matches played on weekends over the nine-month season. On top of that, we organize the Footy Japan Knockout Cup (like the FA Cup), various sevens tournaments like the Charity 7s, and regular “INTERLiga” tournaments for the kids. We have also just started a kids league— “International Junior League”—for U10 and U12 that we hope to expand like the TML.

Let’s talk about Charity Soccer 7s. How has the event evolved since the first one was held in 2005?

We started the Charity tournament to raise funds for UNICEF after the Asian tsunami. We started it as a six-a-side tournament, but since then it has become seven-a-side to be more in line with other tournaments held around Asia. We have tried to make it bigger for prospective sponsors, thinking of ways to enhance the event and raise more money. So, this year we have also included a children’s tournament for the first time.

This year, Charity Soccer 7s will be raising money for Refugees International Japan. How do you select the charity that you want to support?

We have always chosen a charity close to our hearts, with children being a major benefactor. I have had a long relationship with RIJ, and have known the CEO for 25 years. We like the way they help people by creating opportunities for them to help themselves. Football is also a tool they use for bringing people together and bonding communities, so is also a good fit with what we do.

If someone wants to sponsor the event, what are their options and how do they go about this?

We look for financial sponsors (Gold, Silver, and Bronze) and raffle prize sponsors. Details are at http://footyjapancompetitions.com/events/charity-soccer-7s and contact us through the Sponsorship Request Form.

Where can people find out more about this year’s event, sign up to participate, or get tickets?

Both adult and kids teams wanting to join should contact info@footyjapan.com (there are limited spots available). The cost per team for adults is ¥25,000. For anyone just wanting to come along and watch, it’s free (although we hope they’ll buy raffle tickets)!

Lastly … Which team is the favorite to win the tournament this year?

As the teams who enter each tournament vary (as do their players) we are never quite sure who will be strong, but you can always count on YC&AC’s own team be at or near the top!