When you first sink your toes into the white sand and gaze out onto the turquoise waters of Miyakojima, you’ll forget entirely that you’re in Japan. And, culturally at least, you won’t be.

Okinawa’s fourth largest island is one of hundreds in a chain that extends 1,000 kilometers across the East China Sea. Formerly known as the Ryukyu Kingdom, the area once prospered as an independent territory with its own unique language and way of life. 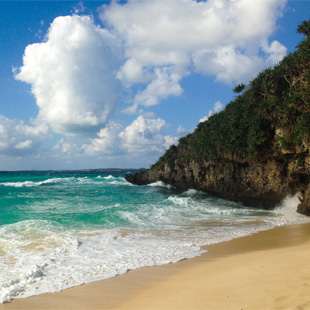 The archipelago’s location helped it flourish in the 14th century as a trading partner of China and territories as far away as Indonesia and the Malacca Straits. The Ryukyuan people were already a melting pot of Mongolian, Ainu, and Malay cultures, and continued to borrow from their new neighbors in creating their own crafts, music, and dance.

Three hundred years later, the Tokugawa shogunate absorbed the Ryukyu archipelago as Japan’s 47th prefecture, and renamed it Okinawa. Japan used its new prefecture as a safeguard to its southern approach during World War II, at the close of which Okinawa was brought under the administrative rule of the United States. The island was returned to Japan on 15 May 1972, but the U.S. still maintains Marine Corps, Air Force, Navy, and Army bases on the islands.

As part of ongoing efforts to improve the defenses of the Nansei Islands, the Japanese government recently implemented a plan to deploy Japan Ground Self-Defense Force troops to Miyakojima. As yet, it’s unclear what effect this move will have on the island, which has, until now, remained installation-free.

A patchwork of sugarcane fields and mangrove forests, edged with white-sand beaches that give way to a tourmaline sea, the island is currently an untouched paradise. The main business and entertainment district of Hirara and the three bridges that extend from the island’s belly to smaller ones offshore are the only real marks of civilization. 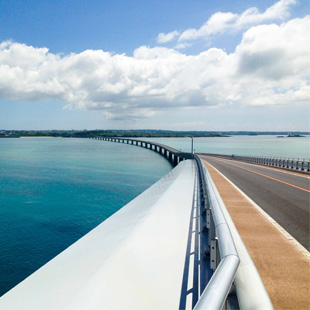 Marine activities are Miyakojima’s biggest draw. Yonaha Maehama is the island’s biggest and longest swimming beach, offering beautiful views of the Kurima Bridge and surrounding nature with yachting, boating, kite-boarding, and jet-skiing opportunities. Visit the smaller, secluded Sunayama Beach to see its famous rock archway and untouched coves on either side.

If you can get past the venomous jellyfish and poisonous sea snakes, the waters on the east side of Miyakojima are famous for their abundance of coral life and swarms of colorful fish. Rent a mask and flippers at Yoshino Beach, where you can enjoy some of the best snorkelling the island has to offer.

A drive across Irabu Ohashi, the longest toll-free bridge in Japan, will take you to the island of its namesake, which boasts over 100 diving sites. Irabujima is known for its extensive network of underwater arches and limestone caves. South of Sawada Beach, you can also witness a unique style of fishing called “katsu.” Here, fish are caught in special traps made of stone walls that work with the rhythm of the tides.

Back on the main island, visit Painagama Beach next to Hirara Port at dusk for spectacular sunsets and night swimming. 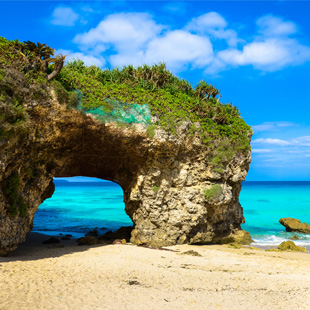 Be sure to sample goya, the region’s bitter cucumber-like vegetable, and the island’s speciality sugarcane juice. A pair of shiisa statues—a traditional Ryukyuan decoration resembling a mythological part-lion, part-dog creature that is believed to ward off evil spirits—make great souvenirs.

Miyakojima is home to several luxury accommodations, including Shigira Resort, which boasts three hotels, a golf course, natural hot springs, and a selection of restaurants. But for a truly authentic island experience, you can’t beat Tsurumiso Guest House. The two-story hostel in Hirata offers both private and shared rooms, and is just a 10-minute walk from Painagama Beach. Attracting both locals and tourists alike, the atmosphere is welcoming and laid-back, with the friendly owners going out of their way to make guests feel at home.