The Mask and the Cityscape

Is facelessness a sign of unity or lost identity?

In mid-February, my aunt and uncle in New York discovered a small box of unopened masks, stored away in an emergency kit from almost two decades ago. The masks were buried away among smoke hoods, flashlights and a small first aid kit, compiled after the devastation of 9/11. As fears of COVID-19 began to circulate among Americans, they pulled out the untouched emergency kit and unpacked the masks, the small pieces of paper connecting the city’s past and present instability.

The presence of the mask in New York, and across the country, has corresponded with the suspension of normalcy. “All of the structures that we depend on have failed us,” lamented a friend in New York. In the city, the mask has become a physical and tangible sign of the crisis, a now ubiquitous cultural artifact inscribed with disruption. “Once, a person wearing a mask in public stood out. But now, it’s the other way around,” wrote Michael Wilson in The New York Times. My parents, lifelong New Yorkers, have never worn a mask before this crisis. Now, my father does not even fetch a package barefaced.

From the perspective of a New Yorker, the ubiquity of the face mask in Tokyo has appeared as a manifestation of the city’s facelessness, for, on the metro, the mask shields the features of many commuters from public view.

Though a lifelong New Yorker, I have become accustomed to masks in daily life in Tokyo far before the current pandemic of COVID-19. I have never donned a mask in New York, but I have often worn one on Tokyo’s metro in rush hour and abided by unspoken social codes, where a cold of any sort requires a mask when in public.

From the perspective of a New Yorker, the ubiquity of the face mask in Tokyo has appeared as a manifestation of the city’s facelessness, for, on the metro, the mask shields the features of many commuters from public view. The metro, like the city, has a rhythm and face coverings are interwoven into the rush and solitude of the world’s largest metropolis.

As fears of COVID-19 spread in late January and early February, Tokyoites were quick to adopt masks, actions undertaken prior to lockdowns or a suspension of normalcy. Unlike the sudden desolation of New York’s streets, disruptions to life in Tokyo have steadily grown and the streets have slowly emptied. The mask, a signifier of collective action, may have helped to perpetuate a sense of stability As Christos Lynteris wrote in a New York Times op-ed, “’Mask culture’ fosters a sense of a fate shared, mutual obligation and civic duty.”

One week prior to the emergency declaration, Prime Minister Shinzo Abe addressed a room of tightly packed, but masked, Diet members and aids. To the dismay of observers, the meeting countered Tokyo Governor Yuriko Koike’s firm requests to avoid enclosed spaces. Instead of heeding the calls for strict measures, Abe offered masks. Two reusable masks per household, to be precise.

Commentators quickly lampooned Abe for the proposal, as a widely shared cartoon jestingly depicted an eight-member household struggling to use two masks and another plastered two masks upon Abe’s eyes and mouth. Masae Ido, an opposition party candidate, criticized the measures as misguided, arguing that the proposal shed light on the administration’s failure of “crisis management.” Though many in the capital have received the masks, they have yet to appear in the cityscape.

From Tokyo, I watched as the aversion to masks among family and friends in New York rapidly transformed into begrudging acceptance by late March. A friend, who previously had mocked my mask wearing in Tokyo, began to don one each time she left her East Village apartment. Yet, even as alarm grew, masks were still not widely used across the country. In an article on Forbes Japan, Keita Nagano explored why Americans failed to adopt masks, even with the growing anxieties over the coronavirus pandemic. While Nagano estimated that 70 percent of people donned masks at Haneda Airport in Tokyo in February, this number shrank to 20 percent as he arrived at an unspecified American airport. American’s initial aversion to masks has not yet abated. 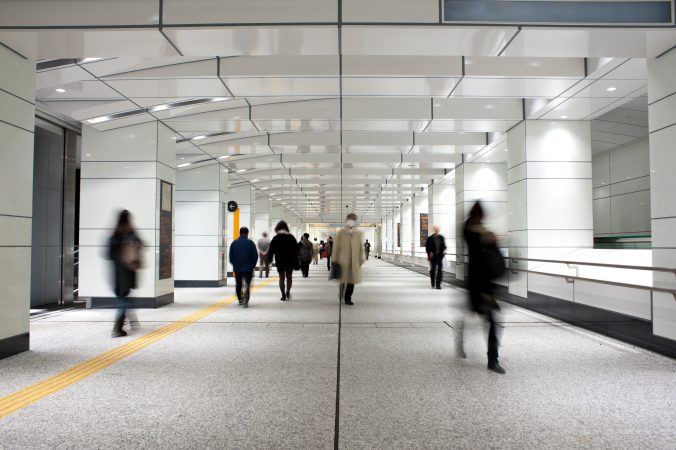 Even now, as American officials recommend and, in some places such as New York, require masks, the usage still faces backlash. “It’s a show of fear,” writes Cheryl K. Chumley of masks in a controversial op-ed in The Washington Times, adding, “America loses a bit of its identity as a nation of rugged individualists and morphs more Asian.” Writer Sandra Heflin, who is half-German, half-Japanese, explains the inverse from the vantage of Japan. In an invocation of kabuki, a form of classical Japanese theater, Heflin insinuated that eyes are essential for communication in Japan, while mouths are central in the west. Despite the essentializing tones in the two pieces, the widespread adoption of the mask did face a rockier road in the states than in Japan.

I never thought I would see masks upon the faces of New Yorkers, for I have understood the mask as antithetical to the character of the city of my birth. The flow of the New York subway is defined by unspoken glances, a brashness tinged with kindness. Though Michel de Certeau writes that the streets of the city, twist and careen “according to an anonymous law,” the inhabitants are anything but anonymous. The face mask contradicts the character of the city, where its use is taboo on the subway, streets or anywhere outside of medical institutions.

Yet, as in Tokyo, the face mask has now entered the cultural landscape of New York. As the legions of the city’s writers begin to sharpen their pens and dissect the landscape of the city, many may soon write of faceless masses that transverse the streets, shop in the stores and ride the subways. The exact meaning of the mask for New York, beyond a symbol of the city’s descent into madness and emergence of crisis, is yet to be entirely written.