Mirai Summer Camp: Tinkering and Coding for the Future

It isn’t every day that kids get to don a cape and mask and fly through the sky, but at the Have fun programming in Scratch! session of Mirai Summer Camp that is exactly what happened.

“What did you notice about the cat?” Kazuhiro Abe, a Professor in the School of Social Informatics at Aoyama Gakuin University and one of the session leaders, asks and hands shoot up around the room to answer. The twenty boys and girls gathered at the computer tables around the room sit in rapt attention as Abe explains how to make the cat move, meow and walk across the screen. Later, the children will use their newfound coding skills to create a version of themselves that will fly over a landscape they create in collaboration with their tablemates. 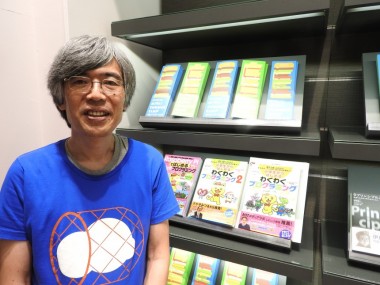 “Mori Building holds these kinds of kids’ workshop hoping that children can realize the fun of learning something by themselves while also cultivating future opportunities for themselves,” says Moichi Watanabe of the Marketing Communications Group for Mori Building.

The Mirai Summer Camp, a series of workshops held each summer since 2015 and sponsored by Mori, are part of a larger initiative that focuses on culture, art and learning the company believes will ultimately improve the quality of life in the city. Starting in 1986, Mori Buildings also offered programs for working adults, established a lending library in 2003 in Roppongi Hills, and opened the Mori Art Museum in 2003.

Abe, who has authored a number of books on Scratch and regularly gives workshops on it to teachers and students alike, sees coding as part of a new and effective way to engage children in learning.

“Traditional education means the teacher teaches the knowledge to the students. However, sometimes this style is not effective. Children learn many things through making and tinkering.  They also learn when they make something that they are interested in, and digital native kids’ interests are, for example, animation, video games and music. If so, we should prepare an environment that lets them make those things, and Scratch is that environment.”

That tinkering Abe refers to should have many forms, according to Atsuo Terada, Director of Canvas, who helped lead the portion of the workshop where children created masks from paper plates, yarn and glue. Canvas, a non-profit organization, offers workshops and classes that combine the study of science with music and art. Putting programming together with real world crafting like making the masks during the Scratch workshop, further engages the children and stimulates their creative minds. 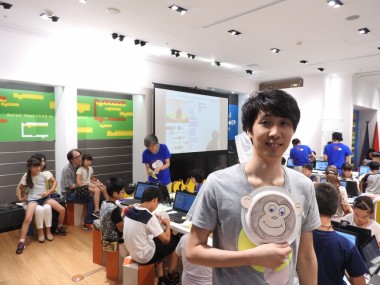 “In the past, we have used old cardboard boxes as game controllers that children painted,” Terada says. “The combination of both hardware and software lets them make some surprising discoveries and expands their minds as well as the possibilities.”

Eric Schilling, Scratch Online Community Manager with the Lifelong Kindergarten Program and Yumiko Murai, a Postdoctoral Associate at MIT’s Media Lab Learning Initiative, were also on hand to help lead the Mirai Summer Camp Scratch workshop. They see Scratch as a means to kindle and stimulate creativity, something that can be lacking in modern life.

“We are concerned that more and more children are engaged in passive ways of spending time such as watching television and playing video games,” Schilling says. “We would like to create more opportunities where children can be creators and not consumers. This workshop aimed to introduce this idea and support the children to gain confidence that they can create interesting things with their own hands.” 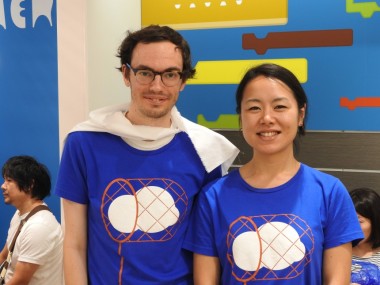 It’s also important, Schilling says, that the learning and exploring do not end with the workshop.

“We also hope that this workshop provided an opportunity for the participants to explore and find their interest and passion. We bumped into a parent on a street in Ginza after the workshop and was told that her son is working on Scratch project at home after the workshop, which is the most wonderful thing we could hear.”

Is conformity law for students in Japan?

The Pleasure of Learning

How the different education styles have changed me