The complex is over 330 meters long, three stories tall and has about 60 different shops and restaurants filled with both international and domestic brands. Long-term residents of Tokyo will be happy to see the park sticking to its athletic roots, as the rooftop has an open lawn, a skateboard park, a bouldering wall and a multipurpose sports arena. In an effort to promote sustainability, the park is the first project under real estate developer Mitsui : Rayard Brand, which combines commercial buildings with green spaces.

The facility, which opened in July, is indeed beautiful. So beautiful, in fact, that it’s easy to forget that Miyashita Park used to be home to a large homeless population in Shibuya Ward. 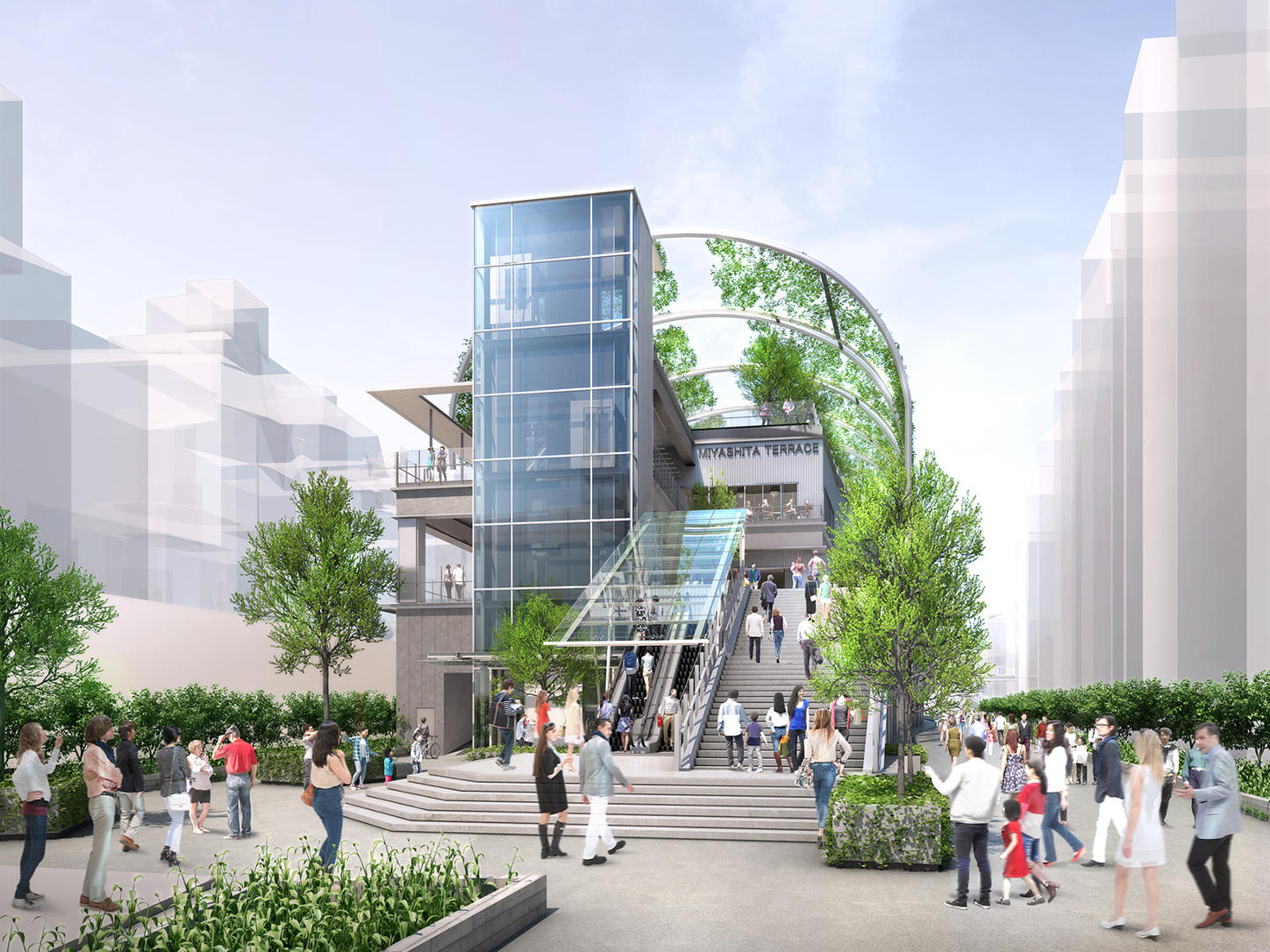 The tumultuous history of Miyashita Park

Before its redevelopment, Miyashita Park was one of the few public green areas in Shibuya’s business ward. The origins of the park stretch back to the 1930s and, in 1964, the year of the first Tokyo Olympics, the Japanese government redesigned the space to include a parking garage.

Since then, ownership of the park has fallen into numerous hands, from the government to Nike Japan in the early 2000s. As Shibuya’s vibrant youth culture gained national and international fame, local officials embarked on a series of beautification efforts to clean up the city’s image.

In 2011, Center Gai, a popular shopping street connected to the famous crosswalk, was nicknamed “Basket Street,” a Japanified version of “Basketball Street,” to instill an image of youth, health and sports. As Shibuya unveiled its new beautification campaign and increased street policing, Miyashita Park was just one of the many spaces on the list to be redeveloped.

The park functioned as more than just another green space in Tokyo. Since it was one of the few publicly open spaces in Tokyo, many homeless people and runaway youth gathered in the park at night. In a Twitter post, Yumeno Nito, a social entrepreneur and founder of Colabo, a nonprofit that helps victims of sexual abuse, recounts her time as a lost youth on the streets of Shibuya. Nito describes how police patrols would forcibly remove both young and homeless people from the park once the park was officially sold.

Yumeno Mito, who runs an organization that helps girl runaways, is angry that developments like Miyashita Park in Shibuya are removing vulnerable people from public view, without addressing the underlying problems. https://t.co/fOdIS2U4qk

Nonprofits also began operating out of Miyashita Park to give service to the park’s vulnerable community. Volunteer-based organization Nojiren began their soup kitchen operation in 1998. The NPO targeted all public parks in Shibuya Ward but their biggest base of operation was in Miyashita Park. The battle for Miyashita has been ongoing for ten years, prompting protests from Nojiren and The Coalition to Protect Miyashita Park from Becoming Nike Park to band together and protest the rebranding of the park under Nike, fearful that one of the few public spaces in Tokyo would change into yet another commercial establishment.

Last year, the Japan Ministry of Health, Labour and Welfare reported that there were approximately 4,555 homeless people in Japan — a low number compared to 2003, when about 23,000 people were reported homeless.

In Japan, there’s an unspoken social contract wherein homeless people don’t beg passersby for money and are rarely seen around town during the day. However, from around 9pm, shelters made of cardboard and blue tarp begin popping up around major stations and parks as those without homes settle in for a night on the street. 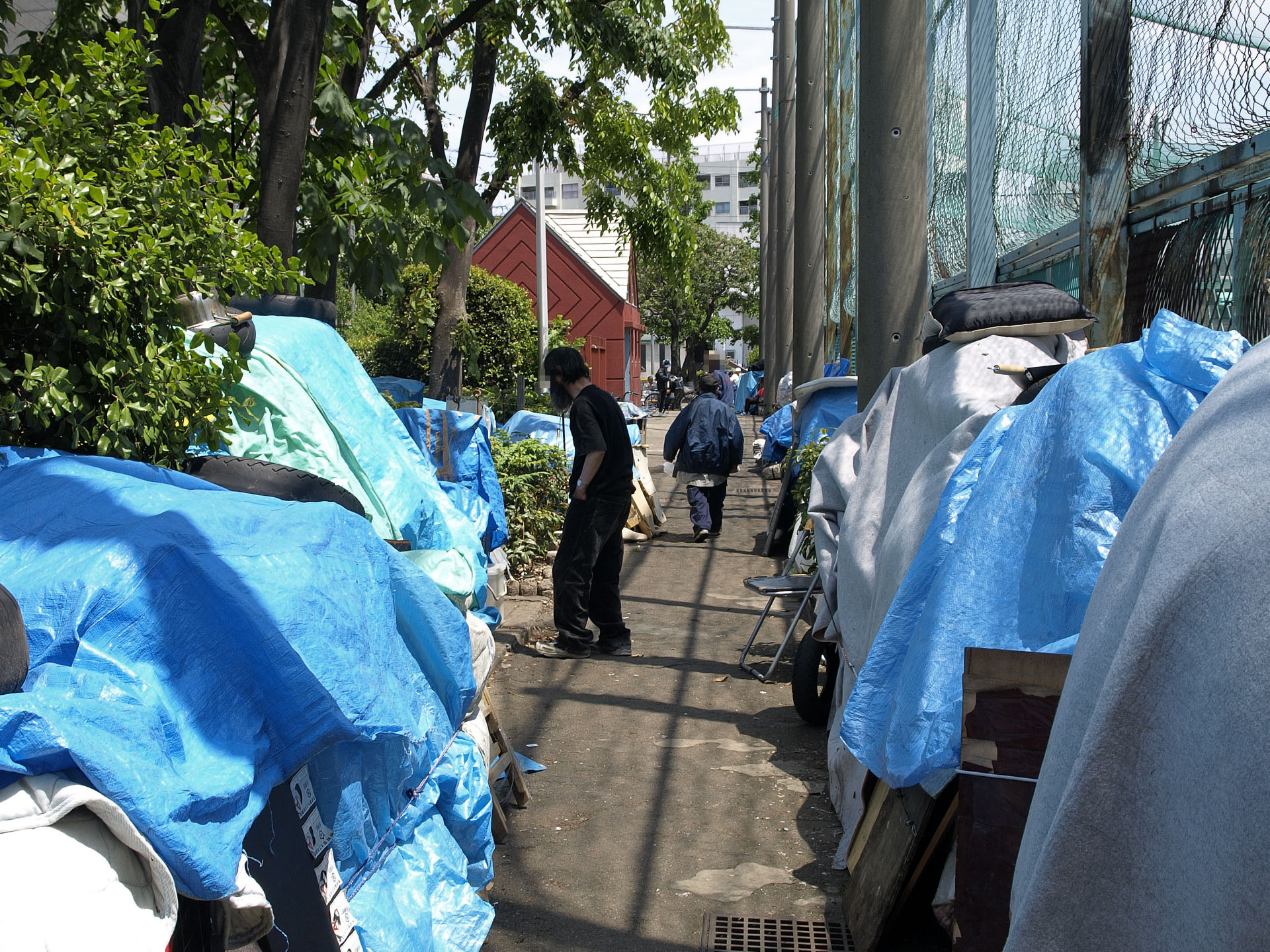 Often, homeless people are regarded as an eyesore, a constant reminder of what’s to come if you don’t follow the rules of society. At worst, homeless people are attacked for existing in public spaces, like in Gifu Prefecture, where five teens were arrested for murdering a homeless man in April.

An independent survey conducted in 2019 by the Advocacy and Research Centre for the Homeless (ARCH) Tokyo reported the actual number of homeless people today is at least  2.8 times higher than the official government report. The discrepancy largely stems from the time of day the survey was taken. The government report was conducted in the daytime, missing those who continue to work during the day but don’t have an official place to stay at night. The survey also only reports on homeless people living in parks, on the streets or in shelters and doesn’t account for the thousands of people making use of 24-hour facilities like internet and manga cafes.

Coronavirus and the homeless population

Now, as the number of coronavirus cases continues to climb in Japan, the homeless population is especially vulnerable. Many of them have prior health concerns, such as heart disease and diabetes. Takayuki Koda, a 67-year-old homeless man, told The Japan Times that, “Coronavirus is an illness for pampered people.” The reports on homeless people dying have been few and far between, so they paint a picture that there isn’t anything to worry about.

However, homeless people are at a much higher risk of contracting and dying from COVID-19 than any other group.

This concern has prompted a Change.org petition requesting the use of the (currently empty) Olympic Athletic Villages and stadiums as temporary homeless shelters. While the petition has garnered over 54,000 signatures, there doesn’t seem to be any indication that the government will follow suit. So far, the organizers of the Tokyo Olympic Games and the government have refused to comment on the petition. While the government has offered assistance to those affected by the virus, much of those services are not available if a person doesn’t have a verifiable address.

Miyashita Park is beautiful and the design does show some effort in keeping the community green. The stores in the mall are aimed entirely at Shibuya’s vibrant, ever-changing youth culture, which values art, sustainability and community more so than previous generations.

Although the public is highly receptive of the new mall, the destruction of the park has left those most vulnerable in society completely alienated. As big names like Nike, Balenciaga and Louis Vuitton move in, they’re pushing out local businesses and some of society’s most at-risk individuals.

While redeveloping urban spaces can be inspiring and help attract more tourists to the capital, commercial overhauls like the recently reopened Miyashita Park inevitably leave one to wonder: Couldn’t the money used to build these facilities be used for something else?