The rise of Japanese cool in Ginza

On a sunny Sunday in spring, Tokyo’s Chuo-Dori street is closed to traffic. Men clad in suits walk hand-in-hand with women under umbrellas. These fashionable individuals are drawn to the street’s European boutiques and upscale restaurants. Their crowd is interspersed with tourists, who are marked by their cameras and often confused expressions. These tourists walk aimlessly through this neighborhood of Ginza, and, unknown to them, partake in a century-old tradition—Ginzabura, to wander aimlessly through Ginza. Since 1879, this has been the mode of choice to experience Ginza, the apex of cool in Japan. 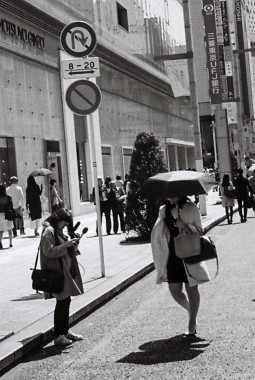 Ginza is a neighborhood in Chuo-ku in East Tokyo, adjacent to the Imperial Palace and Tokyo Station. It is bordered by the neighborhoods of Tsukiji, Shimbashi and Yurakucho. Ginza’s uniqueness is the result of its constant evolution and change. This reinvention has been the result of continual destruction. In 1872, 1923 and 1945, fires or bombs razed the neighborhood. Yet each time, a new neighborhood replaced the rubble. What was new and cool in modern Japan? We can understand this through the happenings and perceptions of Ginza.

Originally, in the Tokugawa era, the neighborhood was not of much note. However, in 1872, a fire tore through Ginza and burned thousands of houses to the ground. This was fortuitous: Out of the rubble, a new Ginza was built that embraced the newest in architecture. This was Western architecture, divergent from the traditional architecture of wooden homes that marked Tokugawa Japan.

Under the leadership of the Irish architect Thomas Waters, the streets were paved in brick and buildings of the same. The streets were lined with gas lamps, symbols of modernity. Fittingly, the neighborhood was termed “bricktown.” As the streets and buildings changed, the neighborhood began to attract purveyors of the newly introduced Western fashions and goods. Those traversing the brick streets of Ginza began to don these goods and participate in trending Western fashions. The West, in its many incarnations from architecture to clothes, was equated to modernity, and Ginza was its hub.

This Westernized neighborhood was a fulfillment of a new vision for Japan. “Ginza seemed to embody the national pursuit of ‘civilization and enlightenment,’” argues the scholar Louise Young in her book Beyond the Metropolis. This was the slogan of the time and a catchall for the processes of modernization and Westernization. Ginza was the site to experience this new world, and became the symbol of these new developments and the dawn of a new type of society.

Ginza continued to grow until the 1923 Kanto earthquake destroyed it once again. When the wreckage was cleared away, Ginza was built on a grander scale than before. This is when the fashionable store Matsuya opened its flagship store in Ginza. The store became a centerpiece of the neighborhood. The construction of the new 1925 store cemented Ginza as the shopping mecca of 1920s fashion. 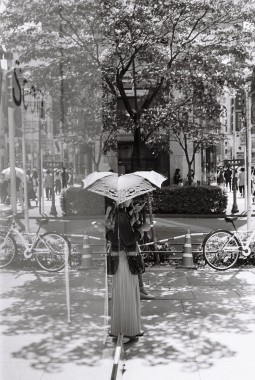 Matsuya epitomized a new lifestyle in Japan, fashioned as modern life (modan raifu). Its symbol was the modern girl (modan gaaru). She was loosely based on Hollywood’s representations of the American flapper, sporting Western fashion, shorter hair, and often indulging in drink and sex. She was seen on the streets of Ginza with the male equivalent, the modern boy (modan booi).

They partook in strolling through the center of this new life in Ginza. This is when the term “Ginzabura” was coined, and it coincided with Ginza’s broadening symbolic appeal. The idea of Ginza expanded beyond Tokyo’s confines, and “Ginzabura” entered into the popular Japanese lexicon.

The interwar boom of the 1920s and 1930s was followed by a war that left the nation ravaged. The Ginza of 1945, therefore, scantily resembled the interwar center of luxury and opulence. While the brick streets of Ginza at times remained intact, much of the area lay flattened. Yet in the immediate postwar period, Ginza once again bore the hallmark of the new, this time clad in American military uniforms.

As the center of the American occupation forces, Ginza underwent American-led shifts. The Matsuya department store was transformed into the American PX, where American military personnel would buy goods. Stalls catering to American GIs lined the streets of Ginza. These streets began to bear American names, such as Broadway. These changes transformed Ginza into a hub of the postwar American influence that took hold of Japan. This so-called Americanization founds its roots, both real and symbolic, in Ginza.

“Ginza seemed to embody the national pursuit of ‘civilization and enlightenment’”

Though the occupation ended in 1952, Ginza continued to experience American influence. In the 1960s, this was most visible in the style of young men loitering on the neighborhood’s streets. These stylish men donned blazers and loafers, staples of American preppy fashion. This fashion was called Ivy, and the group the Miyuki-zoku (with Miyuki being the name of a popular street in Ginza, and –zoku being the Japanese suffix for “tribe”). Ivy was based on the perceived fashion of collegiate American students, and was a dramatic break from traditional student dress. The streets of Ginza became the runway for this fashion trend, while the pages of Men’s Club, the preeminent Japanese fashion magazine, documented its rise. This style became mainstream and has continued to this day. 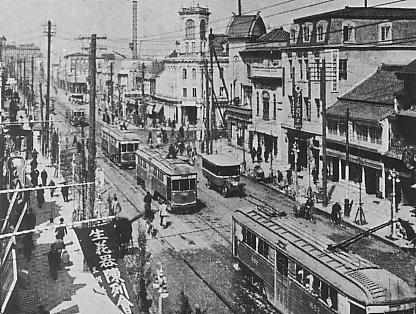 Ginza circa 1922. From Wikimedia Commons

Contemporary Ginza bears the imprints of this historic trajectory. While tourists have overrun the neighborhood, it still bears the marks of the new and cool. Less American and more European in its influence, this new Ginza shares the limelight with Shibuya and Shinjuku. Yet Ginza remains a hub of high-end shopping and food. Stylish couples sip wine overlooking the street and peer at those donning the newest looks. On any given Saturday night, the neighborhood’s main thoroughfare teems with well-dressed individuals.

This history of Ginza provides a lens through which we can understand Japanese modernity. It was not a smooth process, but rather one that was disjointed and multifaceted. Ginza, as a site and an idea, is the epitome of modern Western fashion. A real and imagined West took hold of Japan from Meiji onward and became equated to modernity and modernization. Ginza became the embodiment of this new experience and idea. “Ginzabura” was then the most accessible mode by which ordinary Japanese could experience, or imagine experiencing, this new world.

Correction: In the print issue, the quote “Ginza was the site to experience this new world, and became the symbol of these new developments and the dawn of a new type of society.” was erroneously attributed to Louise Young in a pull quote. The quote is original to the author of the article.