Given the vaulting ambitions of their instrumental rock creations, Glasgow’s Mogwai have always been a remarkably humble bunch of guys. It’s with characteristic surprise that they reacted to seeing last year’s Rave Tapes become the band’s first-ever Top 10 album in the U.K.

“It was amazing,” says member Stuart Braithwaite. The guitarist and occasional vocalist is motoring from his girlfriend’s place in England back home to Scotland. “I guess it makes us a real band. Our music’s not very commercial, so to even be in that company shows that we’ve managed to reach a lot of people over the years and a lot of people stuck with us over the years, so it’s definitely something to celebrate. I’m not sure if we drank champagne, but there were definitely a few drinks involved.” 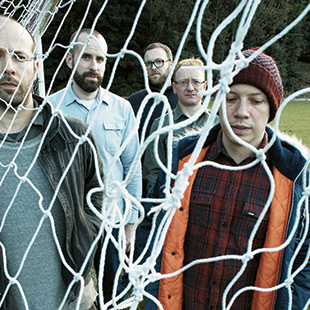 Rave Tapes is arguably Mogwai’s most accessible outing to date. The monumental walls of guitar sound have largely given way to something more subtle and atmospheric. Tracked at the band’s Castle Of Doom studio in Glasgow, songs like “Remurdered” and “Hexon Bogon” feature starkly simple—beautiful even—analog synth lines that may have given the band an in with fans of electronic music along the lines of Kraftwerk or Aphex Twin.

Braithwaite is loath to ascribe the Top 10 ranking to the quintet’s new sonic direction. “To be honest, I think it was good timing,” he asserts in a pleasant brogue. “We were on tour when the record came out, playing a lot of shows. I think people were just ready for the record to come out.”

The guitarist also makes the counterintuitive point that the growth of the internet has, while gutting album sales, helped the trajectory of noncommercial bands like Mogwai. When Metropolis first spoke to the group nine years ago, the web was already upending the music industry.

“We couldn’t see how influential things like YouTube would be … Spotify changing the way we pay for music …” Braithwaite ventures. “It’s easier for people to discover bands now. When we first started there was a real struggle for bands to make more than a couple records if they didn’t sell. Now it’s the general public that defines what’s cool, rather than music magazines or radio.”

Braithwaite says what they’ve lost in album sales, they’ve made up for in listener growth. “I don’t think it’s more people buying our music, but it is more people listening to our music,” he stresses. “We made up for the drop in sales by touring a lot, playing a lot of shows and festivals.”

Mogwai have toured Japan numerous times, and been a fixture of the Fuji Rock Festival, but the upcoming dates mark the band’s first visit in three years. The tour also sees the group celebrating its 20th year.

How do they feel when they look back on their accumulated eight studio albums and numerous soundtracks? “Nostalgia really,” Braithwhaite ventures. “Every time you make a record it’s a document of the time it was made. Now we’re making music as adults, so when I go back to the old material, it reminds me of different, younger periods in my life.”

Speaking with Braithwhaite, you get the sense that Mogwai have remained unsullied by the messiness of the music industry—and the demands of rock-star egos. “We get along pretty well, and we still like playing with each other,” he says. “We’re always mindful of how lucky we are. Even though it’s not always easy, there are people who have a hard time making a living, so we are appreciative. Music means everything to me. It’s my life’s work and my passion and I’m lucky enough to have it as a living.”