Director/screenwriter Ryota Nakano is a hot property among Japanese filmmakers. After graduating from university the 45-year-old auteur attended the film school The Japan Academy of the Moving Image (full disclosure: I was an instructor there for six years) and his graduation project, titled As We Go Cheering Our Flaming Lives (2000), won the school’s Imamura Award (named after the institution’s founder, the legendary filmmaker Shohei Imamura). The piece also received the Tama New Wave Grand Prix. His first feature film, Capturing Dad, premiered at the 2012 Berlin International Film Festival and snared awards for the actors, notably the Asian Film Awards Best Supporting Actress for Makiko Watanabe in 2013. The film also scooped up a prize at the Skip City International D – Cinema Film Festival.  It was Nakano’s next flick, however,  Her Love Boils Bathwater (2016), which established him as a leading Japanese director. The effort garnered 14 international prizes and 34 domestic ones, including an impressive six Japan Academy Awards. 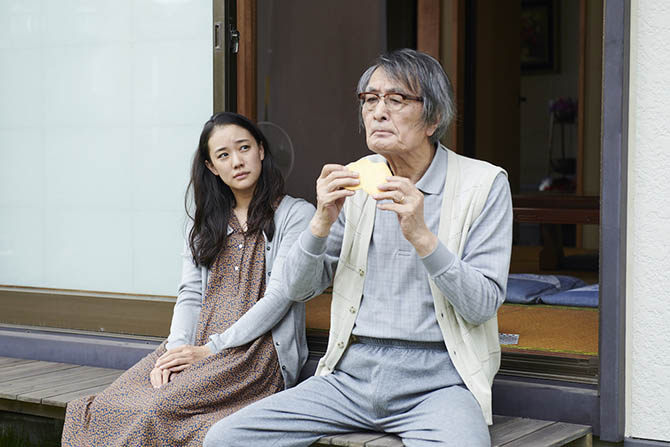 His current work, Nagai Owakare (The Long Good-Bye), is based on a best-selling novel of the same name by Kyoko Nakajima. The story of a man affected by Alzheimer’s disease, it falls squarely into the namida chodai (weepy) genre of Japanese films. But in Nakano’s expert hands, what could have been (and with other directors usually is) overdone and cloying, is touching, understated and powerful. 83-year old Tsutomu Yamazaki, best known for his role in the Academy Award winning Departures, brilliantly portrays Shohei, a retired middle school principal. On his 70th birthday, his wife Yoko (Chieko Matsubara) gathers the family, eldest daughter Mari (Yuko Takeuchi) and younger daughter Fumi (Yu Aoi). Mari lives in California and Fumi in Tokyo, so both make the trip to Shizuoka. Mom lets them know dad has been confused and lost at times; the doctors say Alzheimer’s will slowly rob him of his faculties. Filled with nuance and insight into both family and loss, the story traces a seven-year period where this happens. Almost immediately Shohei is generally muddled, and the film artfully portrays a person struggling to remain present. There are many insights into the human mind, whether from Shohei’s lucid moments, or even when he’s disconnected. The man remembers minute details and touching episodes from his daughters’ childhoods, things they’ve long ago forgotten. The aging couple sometimes reminisce about their very Showa romance, and with this the 1961 hit song “Ue o Muite Aruko” (known as “Sukiyaki” in English) is sung to powerful effect by the actors on two occasions. The fragility and melancholy of life washes over the viewer.

What makes the piece all the more satisfying is the two subplots of the daughters. Both are struggling in their lives and this means dealing with dad’s illness is even more painful. Mari moved to California for her husband’s job, but she can’t make progress with the language and gradually feels alienated from both her unemotional hubby and her Americanized son, Takashi. Fumi leaves her boyfriend in Tokyo to move back to Shizuoka and care for dad, but feels adrift. She starts a new romance with Michihiko but it falls apart when she understands he wants to be there for his young child from a previous marriage. All these emotions from both children are stirred into the mix when the family comes together to celebrate, commiserate, reminisce and mourn. Nakano’s deft touch allows the sublime to emerge from the sadness.