Walking the fine line between spirituality and showmanship

A lone noh actor, clad in his costume of layered orange kimono and ornate golden headwear, glides gracefully across the stage. His every motion is meticulously calculated; he moves each limb slowly to reduce unnecessary movement. His pale white mask, depicting a stiff and emotionless face, stares blankly into the distance as the accompanying (jarring) bamboo flute accents every turn of the head.

The immaculate performance is like any other traditional noh show, save for the fact that the stage is adorned with exotic green flora. And a slideshow of Mt. Fuji pictures projected onto the white screen in the background. And an ensemble of Western instruments is accompanying the bamboo flute. Yet, it is a captivating take on the renowned noh play “Hagoromo” (Dance of an Angel), directed and led by the very man behind the mask, Noboru Katsumi. 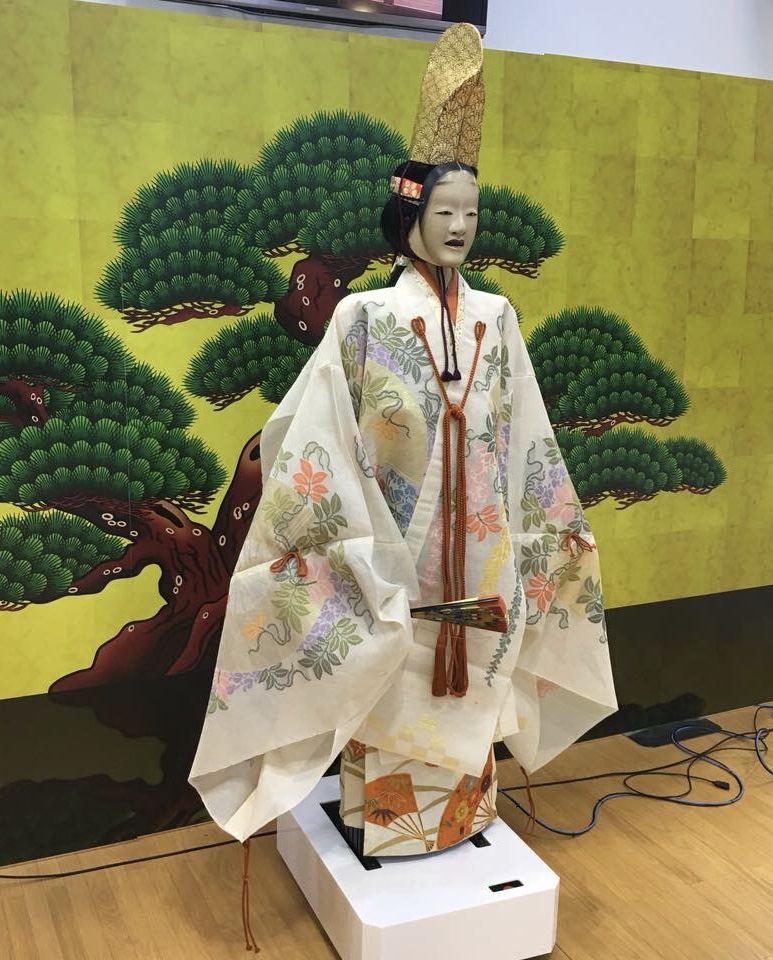 Katsumi, the shite (leading member) of this company, is performing in front of a largely non-Japanese audience, at a theater just north of Hollywood as part of his “World of Noh” tour. He says that the plants depict a traditional Japanese garden, evoking a Japanese ambience, along with the Fuji artwork on an otherwise dull auditorium stage.

“In Japan, having an empty stage with a simple pine tree in the background is fine, but not when I go abroad,” says Katsumi. “Especially in America, where they’re used to the spectacle of Hollywood and Broadway, there needs to be some show business imagery.”

The LA performance is just one of many overseas shows Katsumi has starred in over the past decade. He has performed not only in cultural hubs like Paris and Moscow, but also in countries like Kazakhstan, Uzbekistan and the Kyrgyz Republic. Despite the latter countries having less cultural exchange with Japan as the former places, Katsumi’s performances garner a great amount of interest.

“In the Kyrgyz Republic, a newspaper reported on my performance as ‘the first noh performance since the founding of the nation’ on its front page. State-run media, from television to radio, also came to interview me,” says the noh actor.

In proper Katsumi fashion, most of his overseas noh performances incorporate Japanese imagery and aspects of local culture. Many of his stage sets feature images of Mt. Fuji or the four seasons as the backdrop, instead of the single painted pine tree found in most Japanese noh theaters. In Kazakhstan, he teamed up with a local folk group to perform noh with traditional Kazakh music. As with the Hollywood set-up, he does this to bridge the gap between Japanese and local culture.

Remixing noh is not an easy task. The pioneer must abide by the fundamental spirit of noh, which places importance on tradition and minimalism. This leaves little room for him to tweak the artform to suit a global audience.

“Noh is an artform of conventions,” he says, “99 percent of the performance is following the teachings of our predecessors, while kabuki is flexible and up to what the audience enjoys most. Noh is focused on the spirituality, and Japan’s spiritual culture is transmitted through noh.

“Kabuki is an addition artform, where you arrange and add things onto the stage. That way, the audience doesn’t need any descriptions, since everything you need to know is on the stage. On the other hand, noh is a subtraction artform, stripping unnecessary and excessive pieces from the stage.” 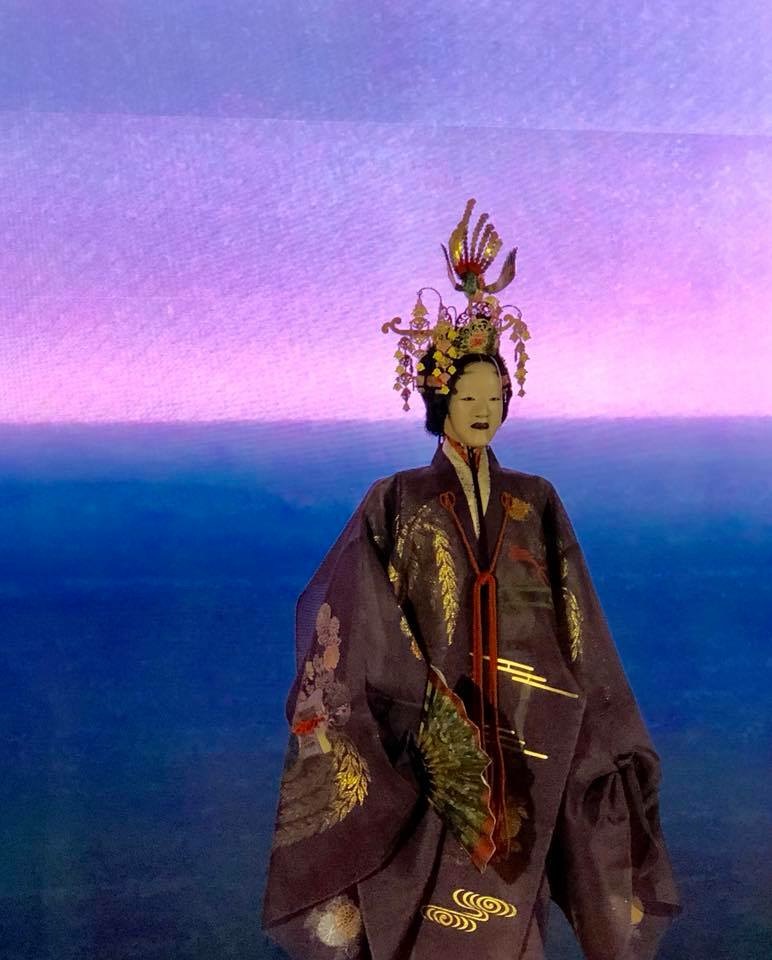 At first, his insistence on following the spirit of noh seems to contradict the modifications he has made to his overseas performances. Replacing the sole pine tree with colorful slideshows and exotic props seems to fly in the face of minimalism.

However, a closer look reveals that the leader of the company masterfully reconciles the minimalism and the extravagance by focusing on what is most important: getting the audience to understand and appreciate the Japanese traditional culture behind noh.

The stage props, he insists, play an important role in setting the scene to appreciate the noh. “For ‘Hagoromo’, the story takes place in Miho no Matsubara (a pine forest in Shizuoka) near Mt. Fuji, so as a prerequisite people need to feel the Japanese imagery,” he explains. “We need to also show the historical background of ‘Hagoromo’, and show things holistically.”

The same goes for the music: “There are four musical instruments in noh, but this is too simple and some say that all the songs sound the same,” the actor says, “So when I go abroad, I keep the flute, the backbone of noh, as the base and then add Western instruments.” He conjects that the audience can appreciate noh better with major Western instruments such as the piano, the violin and the guitar, because listeners can feel a sense of familiarity. 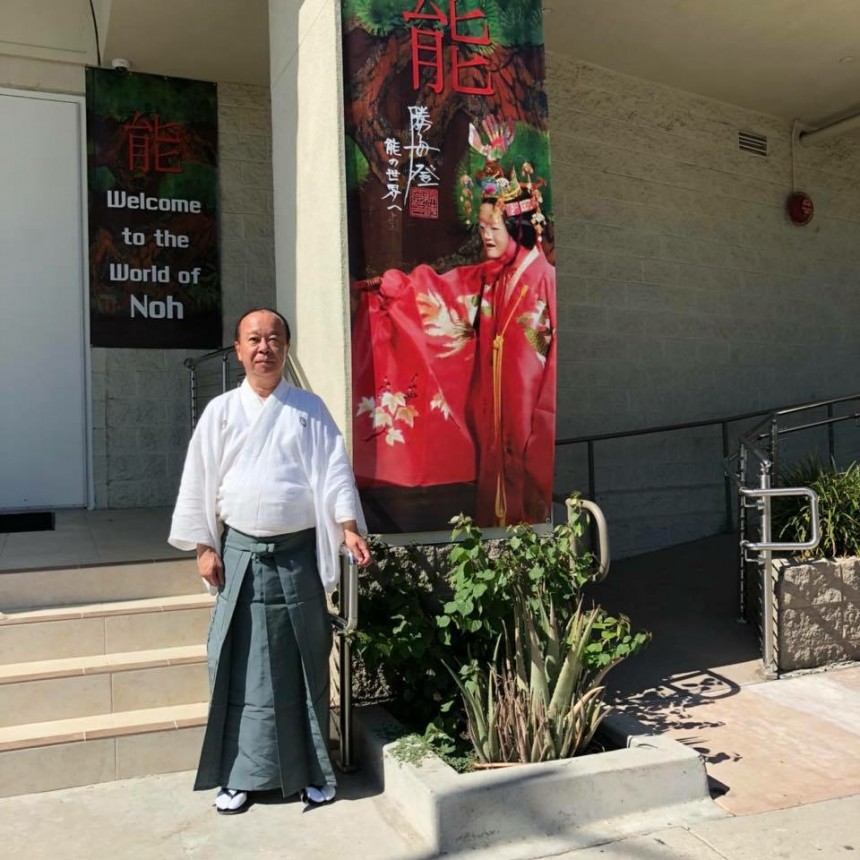 Perhaps this approach stems from his belief that encouraging the audience to appreciate the Japanese culture that noh conveys is paramount. “Noh is a Japanese treasure trove. By treasure, I mean that noh is built on classical Japanese literature like ‘Kojiki’, ‘Man-yoshu’, and then ‘The Tale of Genji’, ‘The Tale of the Heike’ and ‘The Tales of Ise.’ And through these classical literature, you can find Shinto, Buddhism, the Imperial system. By learning or even just watching noh, you can understand the very essence of Japan. Not even Japanese people recognize this.”

Katsumi has plans to visit more regions in the future, including Israel and the Russian Far East. Chances are, he’ll be working his magic again, bringing together the traditional side of noh with local modifications to captivate audiences all over the world.