One woman’s mission to reduce single-use plastics in Japan

“It’s just one straw,” said by every one in Japan, means that 126.49 million straws would be used.

Visitors to the No Plastic Japan website are confronted with this daunting message as soon as they open the webpage. Mona Neuhauss established No Plastic Japan in 2018 as a building block to create a plastic-free and more sustainable culture within Japan. In order to combat the Japan’s excessive consumption of single-use plastics, Neuhauss hopes to use her company as an awareness-raising tool.

A bilingual platform with over 5,500 followers on Instagram, featured by the likes of The Japan Times, Elle Girl, and the UN Environment Programme, No Plastic Japan has certainly gained ground in the local community. The company has flourished since its inception, with its metal straws being sold in popular cafes and restaurants including the Falafel Brothers, as well as in trendy Loft stores scattered throughout Tokyo.

A one-woman operation, Neuhauss juggles her sustainability endeavors alongside her full-time job as a consultant. Proving that one person really can make a difference, she spoke with Metropolis on the catalytic event that brought about No Plastic Japan, her views on single-use plastic consumption in the country, as well as her hopes and goals for sustainability in Japan and beyond. 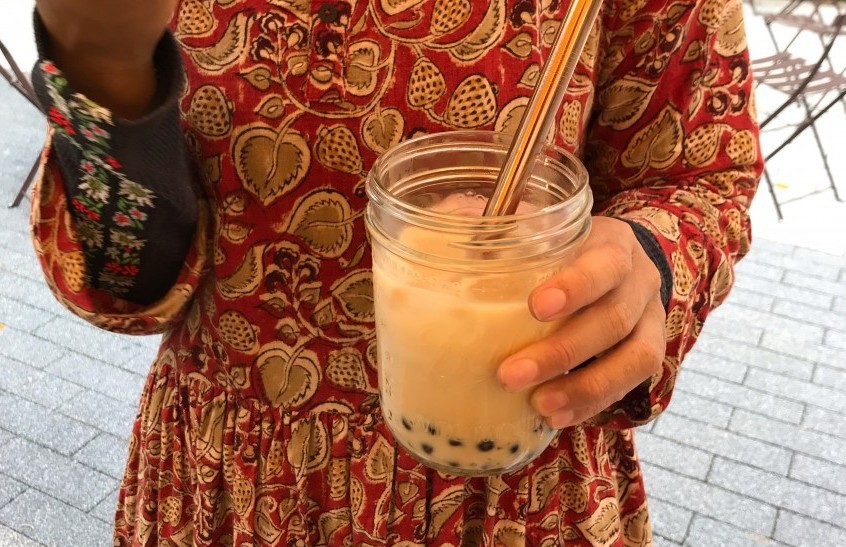 No Plastic Japan’s straws can be purchased online.

Metropolis: No Plastic Japan started in the summer of 2018, almost two years ago. What inspired you to start this endeavor?

Mona Neuhauss: I think it was November 2017, more than six months before I started, I went to a cafe in Tokyo where they were organic and vegan, the kind where you expect them to understand the impacts on the environment. But they were using plastic cups in the store. I emailed them suggesting that they might change that.

Long story short, they did change everything and they are actually quite forward now which is good. But back then, I felt that signing that email off as just myself was just giving the impression it was only me who felt this way, but I knew there were others who shared my views. That was what made me think it would be nice to have a way to represent a community where people felt the same way about this. Instagram was obviously the kind of tool for that, but I think that was a catalyst for sure.

M: In relation to your blog, the bilingual aspect is a big factor. By speaking English, you reach out to Japan’s international community, but you’re also able to get that information out in Japanese.

MN: Yeah, I agree. There was definitely an information gap, especially in Japanese, to find up to date information. But I also think vice versa. English speakers would struggle to know why things are like this in Japan or what the latest was, so I was hoping to bridge that gap too.

M: No Plastic Japan is a one-woman operation. What’s it like running a business by yourself, especially while managing to balance your work as a consultant too?

MN: It took some time to find the balance. When I started No Plastic Japan, I thought that if it doesn’t work out, then all the time and money I put into this project would be a kind of charity, my donation to the planet. So I didn’t really plan it to be a business. This mindset, of just taking it as it comes, has helped. I recommend you do that for when you make a change. Of course there’s big goals — I would love to change policies and whatnot — but it’s always hard to try to strive for that as an initial drive. I worked on that mindset quite a bit just to not stress myself out on thinking this is the business so I really need to make it work.

And the balance aspect of working full-time, it worked at the start but I started to feel conflicted that everything was becoming rushed and squeezed in. As of October last year, I started working four days a week at my full-time job, which has helped me balance the work. Luckily my company is happy to accommodate my other things and I see it as a benefit for everyone, to have employees that have a different network and different passions.

The goal is to be able to make an effort and improve every day, and have more people be open to change — even if it’s not a straight upward road every time.

M: In The Japan Times‘ podcast you mentioned that companies and manufacturers tend to force the excess use of plastics in ways such as inventory. Do you think this will change in Japan?

MN: Certain things will take longer because people are not willing to be as flexible. The problem is that people are not given much responsibility or autonomy to decide on how to do things. That’s usually the problem when you go to a store and the staff say it’s the rules. It’s just things like weird processes that will take a while for Japan to change, but a lot more customers are demanding changes.

For example, the inventory thing you mentioned with the cups will just become unnecessary. When they give discounts on my cups there must be another way to track these things. I found that in the Lawson near my house, they gave me a stainless steel cup instead of a paper cup and were like “Just in case, why don’t you pour it in this first?” It was strange because I could have just used my own cup directly. But at least they had options for it compared to two years ago, so there’s definitely changes now and an understanding of why people might want to reduce waste.

M: Do you think there may be limits to how much things can progress in Japan due to the association between plastic use, aesthetics and hygiene?

MN: One of the reasons why things are progressing is because of global pressure. In terms of things that are more ingrained in service, like making it look nice and so on, that may take longer to change but I think there’s demand for more natural looking things now. For example, I see a lot more paper packaging for things just because it looks nicer. I know this is a very small thing but a preference for those things could encourage change as well. It could take a while, but if you consider single use as a whole, whether it’s paper, plastic or any other material, there’s a long way to go.

M: Just on a local level, how can we encourage change?

MN: I think it’s important to show people that they have choices or things they can influence. The first step is to question things or know that there’s other options out there. Some people don’t know small things like you can use your own cup when you go to a coffee shop or that there’s stainless steel straws out there, or different ways to shop and live. But it’s also important to see other people, like role models, doing it. In Japan people tend to be a little more shy to be the first to act and you don’t really want to stand out, so making things appear more normal is important. I was talking with a friend the other day about how no one really carries their shopping without bags. Usually, you wouldn’t just carry a daikon (radish) in your hand. But if you see a lot of people doing it, that would encourage other people to try.

M: What should we be looking towards as an end goal when considering single-use items and sustainability in a global sense?

MN: I suppose the good thing is that there’s no end goal of: you’ve done everything. In a bleak way, our existence itself is not good for the environment so there’s always going to be things that will have an impact on the environment. The goal is to be able to make an effort and improve every day, and have more people be open to change — even if it’s not a straight upward road every time. There will be times where you forget your eco bag, for example, but just being motivated to carry on improving, that would be the goal.

M: Has there been a specific incident that stood out to you where you really inspired someone to make a huge change in their lives?

MN: Recently, I posted about baby stuff on No Plastic Japan’s Instagram. I didn’t realize so many people were interested in that topic. I got a lot of messages from other mothers who wanted to give me their old stuff. Two to three people offered me their clothes, which was very nice because they were like Please just take it because there should be a circle, when you’re done you give it to someone else. I didn’t inspire them to do anything in particular, but realizing there are people that want to share and be involved was really nice to see and I’m glad I posted about it.

M: What can we expect from No Plastic Japan in the near future?

MN: Good question. Someone told me the other day that they think it’s positively unusual that the account is actually not really about straws. It’s just that straws are the product and that’s the business side of it, but I guess it’s not really about that and I’m hoping to continue talking about the broader mindset of how to be sustainable. I think content will focus on those sorts of things more and hopefully there are more collaborations with companies.

Find out more by visiting the No Plastic Japan website.

Stainless steel straws can be purchased from ¥400.

Shir Lee is a Japanese born, Thai bred, half Malaysian undergraduate student. Enjoys hibernating at home with some anime, Korean noodles and wine.

Japanese/Canadian university student, currently studying in Tokyo. A passionate foodie and self-help book addict, who volunteers and goes on adventures in her free time.