Inside Shibuya’s sleek new Parco department store, the Falafel Brothers’ shop is an eye catcher. Painted blue skies and the Shibuya cityscape adorn the walls, while a large falafel sculpture that doubles as a table sits as the restaurant’s centerpiece. The fresh, funky decor attracts your attention, but environmental consciousness, great food and a friendly atmosphere are what keep customers coming back for more.

Falafel, a dish made from chickpeas ground up and fried into a delicious crisp, is traditionally Middle Eastern. It’s since become a staple food for vegans and street food connoisseurs around the world. In Japan, however, vegan options aren’t as common as in the west, despite growing demand and they can also be expensive.

As a vegetarian himself, these were the problems co-owner Daisuke had experienced while trying to eat out. Thus, the idea of bringing delicious, inexpensive vegan food that was accessible to the masses was born. Coupled with co-owner Amnon’s extensive experience in the food and restaurant industry, the two partnered up to create the first Falafel Brothers restaurant in early 2017. 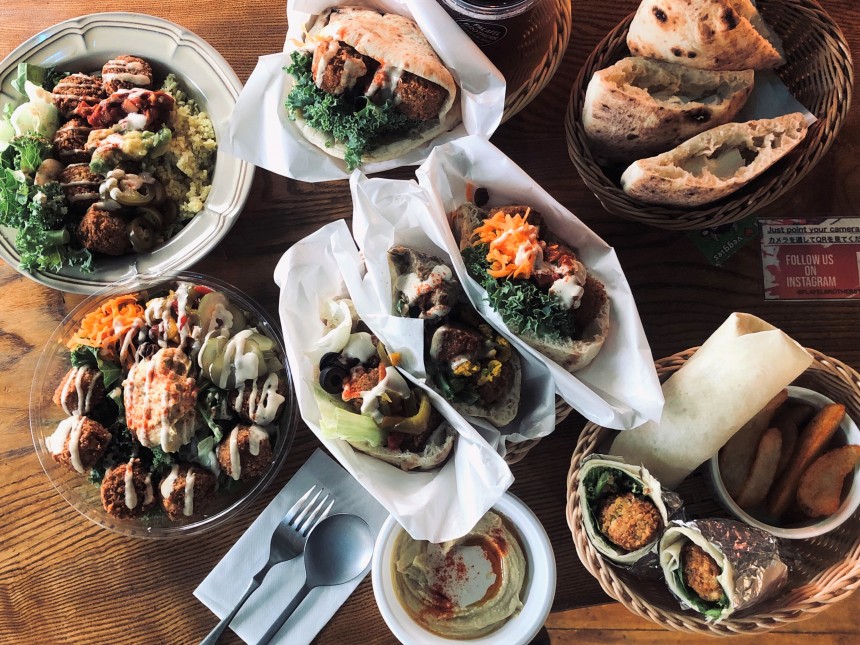 What started out as a tiny 4-seater shop in Roppongi has quickly grown into a successful brand. As lines formed outside their little shop, a second, larger store opened up in Ebisu. In addition to falafel, it serves up vegan delights like gyoza, pizza and even gluten-free cakes. The Shibuya Parco location, which opened late last year, combines the street-food stand concept of the Roppongi store, and the more laid-back cafe style of their Ebisu location to create a playful space for diners to eat and hang out.

Modern, fun and inexpensive are the keywords to the Falafel Brothers’ menu. A standard half-sandwich set (￥950) comes with a side of either soup, potato or lotus wedges and a drink for a filling lunchtime munch. Then, you can pick from about a dozen creatively named toppings that are sure to be a conversation starter and elicit a chuckle or two (we like Chilli Chilli Bell Bell). Always striving to put a twist on traditional vegan food, there’s more stuff in the works, keep on the lookout for new food items coming soon. From all-vegan karaage (fried chicken) to enjoy along with their craft beer selection to vegan hot chocolate as a special treat this coming Valentine’s Day, the Falafel Brothers cover all bases. 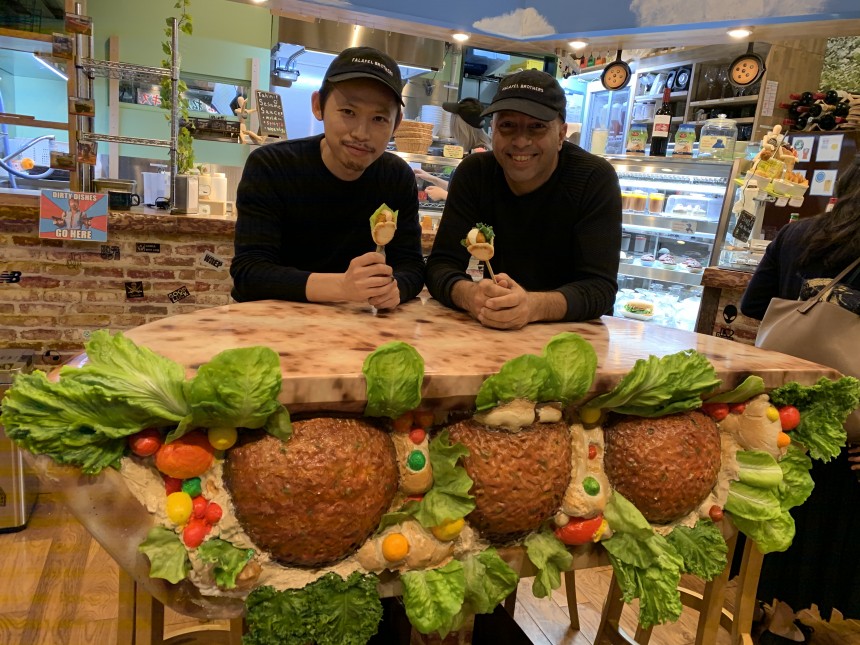 If the success of the Falafel Brothers is not already clear, handwritten messages scrawled on the walls from diners all over the world are a testament to their universal appeal. “We’re not only selling food, we’re selling the experience,” said co-owner Amnon as he described the restaurants they have built. It’s in the name — Falafel Brothers embodies family, and couples it with quirky, fun, and environmentally conscious veganism to create a friendly brand that might just change the way you think about food.

Whether you’re a conscious vegan or a meat-lover looking for a quick bite, the Falafel Brothers welcome you with open arms. Drop by any of their locations in the city for a delicious, guilt-free meal and you may just count yourself a member of their growing family.

Winnie is a 20-something just trying to figure life out. When not writing stories or blogs about millennial problems you can find her at a cafe reading or knitting stuff.