82-year-old Norman Tolman is a giant of the Japanese contemporary art scene. An avid collector, dealer and expert on Japanese modern art, he represents some of the most prominent artists of the last century. Tolman, who has a gallery space and office in Tokyo’s Daimon district, is a multilingual, polymathic personality who has lived a full life, which has taken him from Boston, Ivy League universities and the US Air Force, to a successful career as a diplomat before focusing on a life in art. Here he talks to Metropolis about his passion for art and his long-standing relationship with Toko Shinoda — one of the most renowned artists of the last century.

I have been involved with woodblocks, lithographs, silkscreens, and etchings crafted by some four dozen prominent people since 1972. Among them are well-known celebrity artists such as Toko Shinoda (who is 105 years old), a favorite of the Japanese Imperial family whose works hang in their private dining room; and Katsunori Hamanishi, who produces mezzotints that hang in most major print collections around the world including the Metropolitan Museum. Other artists like Kiyoshi Saito, the first woodblock printmaker to interest the foreign audience in Japan’s graphic accomplishments just after the war ended, was an artist whose works have long-enticed me.

I worked as a diplomat in Japan in the late 60s and developed such an interest in this kind of art that I left my career and opened a gallery handling only Japanese prints, a profession that I have followed for 47 years. Japanese prints have become popular throughout the world, and I think that I can claim some of the credit for that since I have participated in art fairs and exhibitions all around the world — in Melbourne, Hong Kong, Singapore, Kazakhstan, UAE, Switzerland and throughout the United States since the 1980s, all this in addition to running a gallery in Tokyo at full speed since then.

Woodblock prints have been made in Japan since the 8th century when they were used for religious purposes. There was a slight interest in prints just before the war, but after the World War there was more interest and in an enthusiastic development called the Creative Print Movement which swept the art world leading many Japanese artists of talent to print and experiment in various media.

Toko Shinoda was one of the earliest Japanese artists to leave from Japan to the United States in 1956. She went to New York and was introduced by her teacher, Kenzo Okada, to Betty Parsons whose gallery was the fountainhead of Abstract Expressionism.

First as a painter of original works, and then later as a printmaker, her works attracted a whole new audience and even at that early date with great introductions she took part in shows in Boston and in New York.  She was also one of three artists chosen for a U.S. State Department/ Japanese Foreign Ministry traveling exhibition around the USA starting at The Phillips Collection in Washington D.C., called,“Three Pioneers of Abstract Painting in 20th Century Japan.” This early grouping with Kenzo Okada and Waichi Tsutaka allowed her to become known widely in the USA. 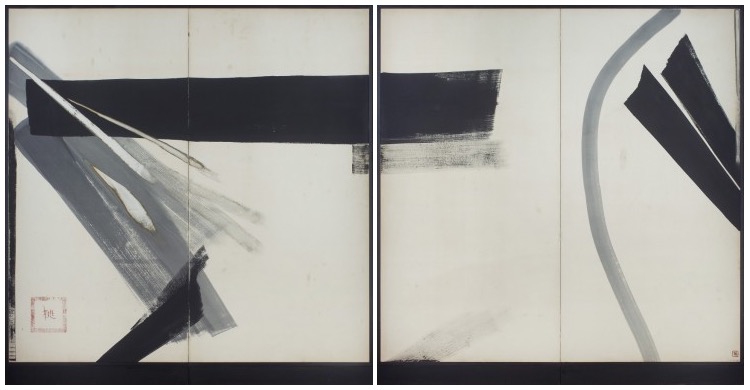 For about ten years Shinoda divided her time between Japan and New York, but eventually, because of her linguistic limitations and the climatic conditions that affected her materials, decided on Japan as her base. Working with the famous architect Kenzo Tange, Shinoda’s work found its way into many outstanding projects with his, all around the globe. Even in unlikely places such as the opera house in Malmo, Sweden, and at La Hune, a Paris avant gallery, Shinoda’s work made her well known internationally.

My first show with this great artist was staged at Zojoji Temple, in Tokyo’s Shiba district, in 1980. The temple is the headquarters of the Pure Land Sect of Buddhism. Recently, in November of 2018, at an extravagant exhibition financially backed by the generosity of Morgan Stanley, and composed of many of her works from my personal collection and others borrowed from my illustrious clients, I produced a showing of Shinoda’s original sumi paintings, works from as far back as the 1950s and 1960s.

I involved myself in this project to express my thanks to Zojoji Temple for showing Shinoda’s major work, a three-panel composition called “The Past, The Present and The Future” which has graced the majestic temple’s walls since its completion in 1974. I also wished to offer more than just verbal thanks to the great artist for creating not only the Temple’s masterpiece, but so many wonderful compositions for art lovers to cherish for almost 100 years.

Shinoda will reach the magical age of 106 on March 28. On this occasion, one of her major pieces from 1968 “Blessing” which is the property of the The Foreign Correspondents Club of Japan (FCCJ), a gift to the FCCJ from the Hitachi Corporation which I borrowed from the club to exhibit at the Zojoji, will be re-installed at a reception at the club in its newly acquired location.

My company was involved enough with this project to commission a brand new million yen frame to elevate this work to the importance which it deserves.

Although Shinoda’s birthday is officially March 28, we have decided to celebrate it at a reception at the club on Friday, March 29.

Those who wish to attend the party should please contact The Tolman Collection at:
tc@tolmantokyo.com.