One rider’s journey from Fukuoka to Tokyo in one month

“So, when did you last ride a bike?” I was hopeful my self-deprecating friend was exaggerating when she told me it had been a while.

The nervous laughter began as our night bus sped down the motorway towards Japan’s southernmost island, the starting point for our one-month trip cycling Japan from Fukuoka back to Tokyo. Issues that had seemed like minor details in the planning of our trip had started to rear their ugly heads. But with our own less-than-fresh heads banging from birthday celebrations in Tokyo the night before, we felt more than ready to live the simple life for the next month; cycling in the day and wild camping at night.

The challenge commenced as soon as we set foot in Fukuoka. Arriving with nothing but the clothes on our backs and a good dose of enthusiasm, we headed straight out to buy bikes. The first stop was Sai Sai, a second-hand bike shop where I decisively purchased a Ferrari cross bike for just ¥15,000. Little did we know, buying bikes was the easy part. Panniers (bags or boxes attached to the side of a touring bike) are a lot harder to come by, as are racks on which to fit panniers — this task took us three days to complete. 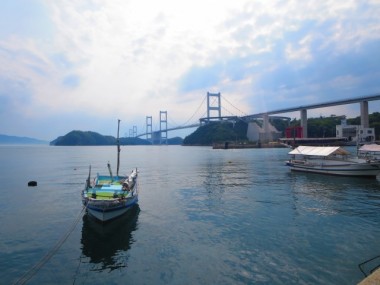 Impatient to start the much-anticipated adventure, we waved goodbye to our Couchsurfing host and we were off. Pedaling our way out of Fukuoka, we were introduced to what we would later discover to be the majority of roads through Japan — valleys cut out against a backdrop of luscious mountains, lined with a never-ending stream of eating establishments interspersed with rice paddies.

The euphoria of the first kilometers was only slightly dampened when the trusty Google Maps directed us to a notably less horizontal road up magnificent mountains we had admired from afar. It transpired that our beloved second-hand bikes were lacking on the gear front, which did make me think there’s a reason Ferrari are known for making cars and not bikes.

The first hill struggle over and the sun teetering on the horizon, we welcomed the deserted onsen that greeted us at the top. After a quick soak, we settled on a bench outside where we sat smugly munching on onigiri, debriefing on the success of our first day and questioning whether we would ever be able to sit comfortably again. The smiles were swiftly wiped from our faces, however, when we went to set up camp and discovered the nifty pop-up tent we’d bagged ourselves for a bargain price from Don Quijote was, in fact, a small, open beach shade.

Begrudgingly returning our sore behinds to our bike seats, we set off into the night feeling like noobs. The first sign of life we came across on the dark countryside roads was a police station. With presumably very little crime to solve in Iizuka’s little mountain towns, seven excited policemen gathered around us to give advice on the best place to stay for the night. The general consensus was that love hotels never disappoint. Spending our first night in a huge bed with a bathroom bigger than most Tokyo apartments, we most certainly weren’t disappointed. 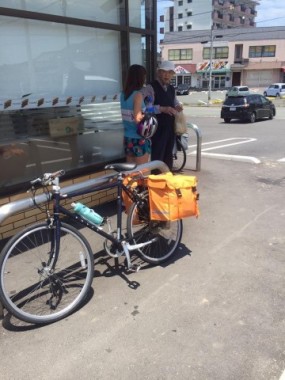 In the following days we became accustomed to the wild camping lifestyle (in a real tent this time), setting up camp in parks, next to lakes or, when the choices were limited, on any grassy patch we could find at the side of the road. Seven Elevens were our saviour on the days that cycling brought little joy. The free Wi-Fi, international card-friendly ATMs and endless snacks gave us the boost we needed to meet our daily distance targets. Frequent breaks at the overly convenient convenience stores aside, we were in a relatively efficient rhythm and routine and I couldn’t help thinking that was something I had never quite mastered in everyday city life.

A week into our trip we were gliding along the flat, coastal roads of west Shikoku enjoying the isolated beaches. On reaching the north coast of Shikoku, we found ourselves on an established cycling route; the Shimanami Kaido. The celebrated highway joins Shikoku to Honshu, hopping over six islands in a series of spectacular suspension bridges. 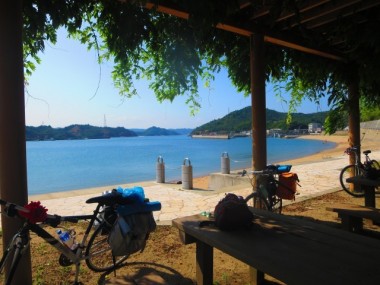 The coast of Shikoku

Bearing in mind that we had chosen cycling Japan in June, in the midst of rainy season, we had been surprisingly lucky up until now. Looking around at the expensive gear-clad pros, I felt a sense of wisdom and superiority with my cheap silver panniers bashing against the sides of my bike. Naively assuming the route would be an easy one, we found our hope fading fast as the rain began to pelt down, not only filling our muddy trainers with puddles of water, but also obscuring the allegedly breathtaking views of the bridges I had spent years dreaming of seeing.

Eighty arduous kilometers and six steep bridge climbs later, we were back on Honshu in the small seaside town of Onomichi. With little motivation to get back on the rainy road again the next morning, we popped out to look for breakfast only to be met by a cycler’s paradise: Onomichi U2. The chic exterior tempted us into a rustic, open-plan space which is home to a bike shop, bakery, café, restaurant, clothes shop and hotel. While the cycling shop gave us a free bike service, we had no problem spending a long, lazy morning carb-loading on baked goods with our only regret being that we hadn’t spotted the complex’s Hotel Cycle the night before. Its cosy, trendy-looking rooms not only offer views over the river, but are also kitted out with bicycle wall mounts for hanging your bikes up, which would have been the perfect solution for the daily separation anxiety we experienced when parking our bikes outside at night. 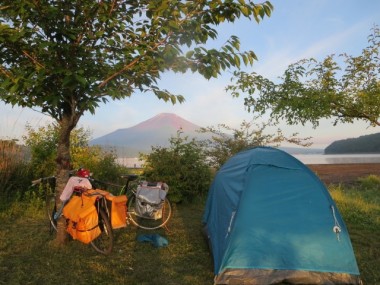 Just days from reaching our final destination, we took a detour up to Lake Yamanaka-ko, one of the Five Fuji Lakes. The day started with a hill and ended with a mountain, getting more strenuous as the day went on. Once we finally made it to the lakeside, we were exhausted and ready to set up camp as soon as possible after being told that an early rise was the best way to spot the nation’s beloved mountain that we knew was currently hiding behind a thick bed of clouds.

Disturbed dreams were interrupted by the screeching of our 4 am alarm. I stumbled out of the tent and was hit by my first ever close up view of Mount Fuji. An immense creation of nature, the mountain was lit up pink by the rising sun and reflected in the calm waters of the lake. I crouched at the side of the water wrapped in my sleeping bag and looked on in absolute awe.

I had always found it ironic to call an outdoor life “the simple life,” but as I peddled those last kilometers into Tokyo, sleep-deprived and aching all over, my thoughts truly felt cleansed. I would be lying if I said that during that month cycling Japan I didn’t worry about everyday life, or check my social media or miss the comfort of a real bed. However, focusing my thoughts predominantly on moving, my mind returned to a simpler state and I couldn’t help feeling it was thanks to the simplicity of overcoming the mountains.